"I want to give a big shout-out to HCC for teaching me everything I know." – Nicole Ortiz '20 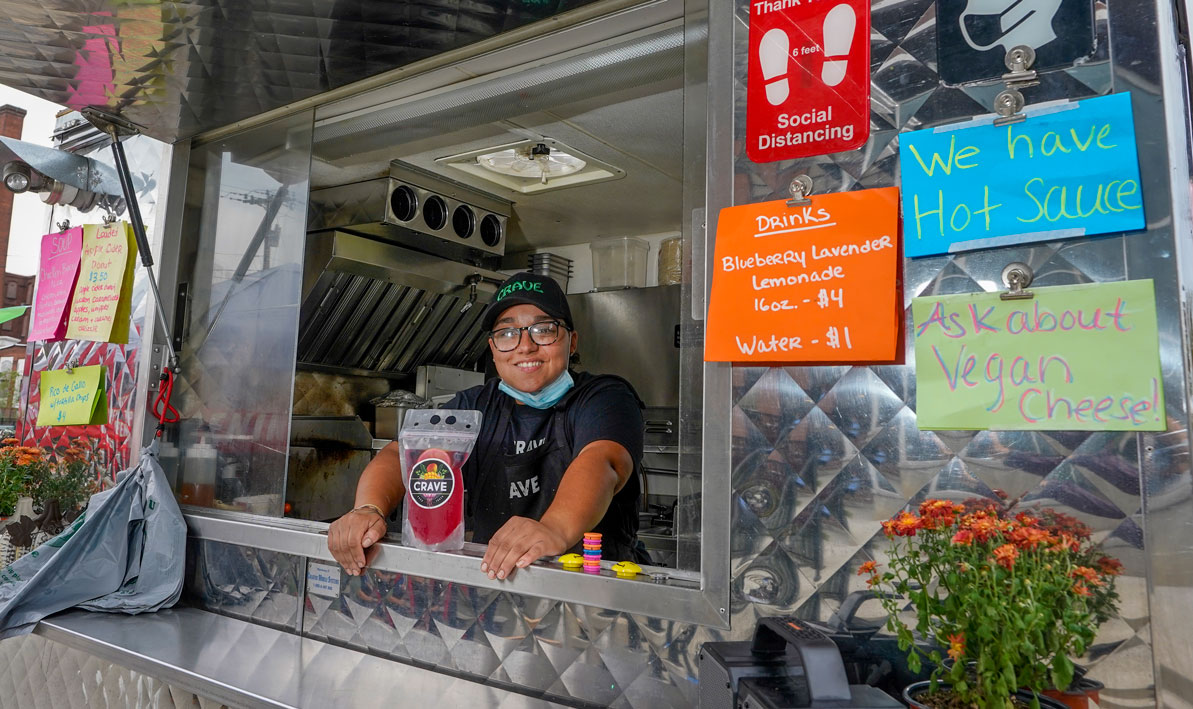 Nicole Ortiz had already earned an associate degree in business by the time she enrolled at HCC in the fall of 2018.

After graduating from Cuyahoga Community College in Cleveland, Ohio, the Connecticut native moved to Springfield to be closer to her family. On her travels around the area, something caught her eye – the brand new HCC MGM Culinary Arts Institute in downtown Holyoke.

With two years' experience working in restaurants and a lifelong passion for cooking, Ortiz began the next leg on her professional journey.

In spring 2019, she received a certificate in Culinary Arts from HCC and a year later her associate degree. In August, when many restaurants had shut down or reduced operations due to the COVID-19 pandemic, Ortiz opened a food truck business called Crave, selling tacos, rice balls, soups, loaded potatoes, and a variety of vegetarian and vegan options.

"This has been a dream of mine for a long time," Ortiz said back in February after being selected to develop her business idea through Holyoke SPARKS's EforAll (Entrepreneurship for All) program.

That dream is now reality. After two months of test runs in the area, the 25-year-old Holyoke resident returned to the HCC MGM Culinary Arts Institute in October to celebrate the grand opening of her food truck business. Holyoke mayor Alex Morse helped her cut the gold ribbon.

"I want to thank and congratulate Nicole and her entire team," Morse said. "This has been a really awesome addition to the city of Holyoke, to the downtown. These are like the most delicious tacos I think you'll ever have."

When Ortiz started classes at HCC, she had had a lot of wait staff experience, but little professional kitchen experience. She says the Culinary Arts program at HCC not only helped her build her skills but set her up for a career as a professional chef.

She was particularly inspired by Culinary Arts instructor Lauren Kendzierski, who taught her how to incorporate sustainable ingredients from local sources into her dishes. Kendzierski's years of experience as a restaurateur sparked Oritz's imagination, and her instructor's stories about having a food truck captured her heart.

"I want to give a big shout-out to HCC for teaching me everything I know," Ortiz said at the grand opening.

Through HCC's Culinary Arts program, she learned more than the basics of cooking and palate development, she said. A key part of the program includes a spring banquet preparation and service class in which students cook and serve Wednesday lunches as if they were running a real restaurant. That course opened her eyes to real world possibilities and encouraged culinary entrepreneurship, she said.

Her business idea got a big boost when she was awarded the first-place prize of $2,500 for her food truck idea through the EforAll program.

Ortiz purchased a truck last spring, graduated from HCC in May and got all her permits in order by the end of the summer.

While Ortiz recently put the truck away for the winter, she is in the process of signing a lease for a small, takeout, dine-in restaurant she hopes to open early next year. She also expects to add another truck by next summer so she can introduce Crave to another nearby city.

"The community has been so supportive," Ortiz said. "We've been selling out most days. We've had tons of support. I think people are feeling more comfortable coming to food trucks right now than they are going to restaurants, 'cause they don't want to be sitting down in restaurants right now, so we do have that advantage."

Ortiz credits diligence and dedication to where she is now in her career and has some advice for others who might have a dream to fulfill.

"Every day, work toward having a better future," she said. "Stay true to yourself and goals, you can achieve anything."

PHOTOS by MICHAEL GORDON: Nicole Ortiz '20 outside and inside her food truck, Crave.