"It was very nice to find out that we have a large number of Latino students, Asian students, and African-American students – a really nice cross section of what the U.S. is." 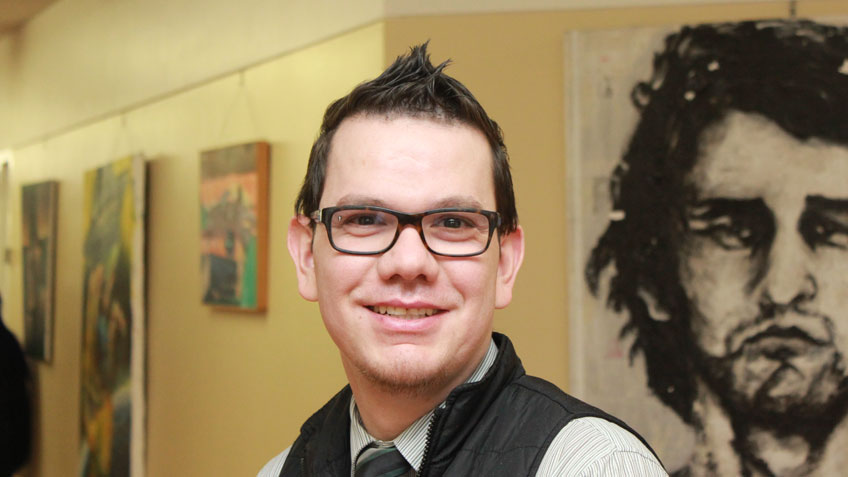 Raúl D. Gutiérrez is a fierce believer in the mission of community colleges, which he calls the most democratic institutions of higher learning. So, he was excited to accept a position as a full-time Spanish instructor at HCC in 2013, though he wondered if he was entering into a never-ending cycle of teaching level 1 Spanish to a largely white student body.

Nothing could be further from the truth. Today, Gutiérrez is in the thick of helping create a Latino studies program at HCC that he hopes will expand the college's reach and scope, and he's teaching a student body that is impressively diverse.

Some students at HCC face extremely difficult life circumstances, including homelessness and food insecurity. There are a wide variety of non-traditional students including new immigrants and DACA students. (Deferred Action for Childhood Arrivals, which confers a legal status on some undocumented immigrants who arrived in this country as children and gives them a reprieve from deportation.)

"I was lucky enough to have two DACA students, and their experiences are enriching to everyone," he said.

There were other surprises in store for Gutiérrez at HCC.

He and HCC Spanish professor Monica Torregrosa wrote a successful $120,000 Bridging Cultures grant from the National Endowment for the Humanities that is being used to train faculty across academic disciplines to infuse Latino studies into some core courses. Gutiérrez has been working on a brand new class, "Introduction to Latino Studies," that will launch in the spring 2017 semester.

The Foreign Languages department has increased its offerings of "Spanish for Heritage Speakers," a course geared to students who learned Spanish at home but may not be fluent. It's also ramped up more advanced Spanish options, such as a Learning Community course combining political science and intermediate Spanish Gutiérrez created with professor Mark Clinton called "Give Me Your Poor: Immigration, Identity and the Struggle for Social Justice."

"The academic possibilities here were a big surprise," he said. "The ability for faculty to go beyond teaching beginner classes and also being able to teach Learning Community classes on thought-provoking topics is extremely engaging."

Gutiérrez is also an advisor to the HCC LISA Club (Latino International Students Association), and, with the help of some current and former students, teaches Spanish literacy classes to migrant farmworkers through Holyoke Chicopee Springfield Head Start. That pilot program, called "Planting Literacy," won an innovation award earlier this year from the Massachusetts Head Start Association. He was promoted to assistant professor of Spanish in Spring 2016 and is now coordinator of the Foreign Languages department.

Born in Mexico, Gutiérrez, 39, was 11 when he moved to Chicago, where his mother told him he would get a better education. He moved to the Pilsen neighborhood, which he described as a formerly Polish-bohemian area that had become a largely Mexican enclave.

"You didn't have to speak English at all," he said.

He earned his bachelor's degree in Spanish and master's degrees in Hispanic Studies from the University of Illinois at Chicago.

After living in an ethnic neighborhood in a big city, he admits he had preconceived notions about western Massachusetts. He was surprised when he explored Holyoke and saw so many Puerto Rican flags and impressed by the vibrancy of the Latino community.

He was also pleasantly surprised by HCC's demographics – 37 percent of the students belong to minority groups. About 25 percent of HCC's student-body is Latino.

"It was very nice to find out that we have a large number of Latino students, Asian students, and African-American students," he said, "a really nice cross section of what the U.S. is."

In addition to his passion for teaching, Gutiérrez is an avid sports fan, so passionate that he has several sports talk stations programmed into his car radio.

"I love football – American football – and I love real football too: soccer," he said.

His time in Chicago turned him into an enthusiastic Bears fan, which has made moving to Massachusetts interesting, to say the least.

"It's different being in New England as a Bears fan because everybody's a Patriot's fan, but I survive," he says diplomatically.

Another newly acquired pastime – and one that surprises him more than anyone else – is gardening. He grows vegetables in a double plot at the Community Gardens off Burts Pit Road in Northampton.

"Never, ever in my life did I think that I'd do that because I'm a guy from the city, a big city in fact," he said.

Gutiérrez lives in Northampton with his wife, Idoia Martinez, a Spanish instructor at the University of Massachusetts, and their two children, Adrian, 7 and Zoe, 2.

"They take my other free time," he says with a wry smile.

Gutiérrez credits his colleagues at HCC with making him feel welcome and easing his adjustment to a new home.