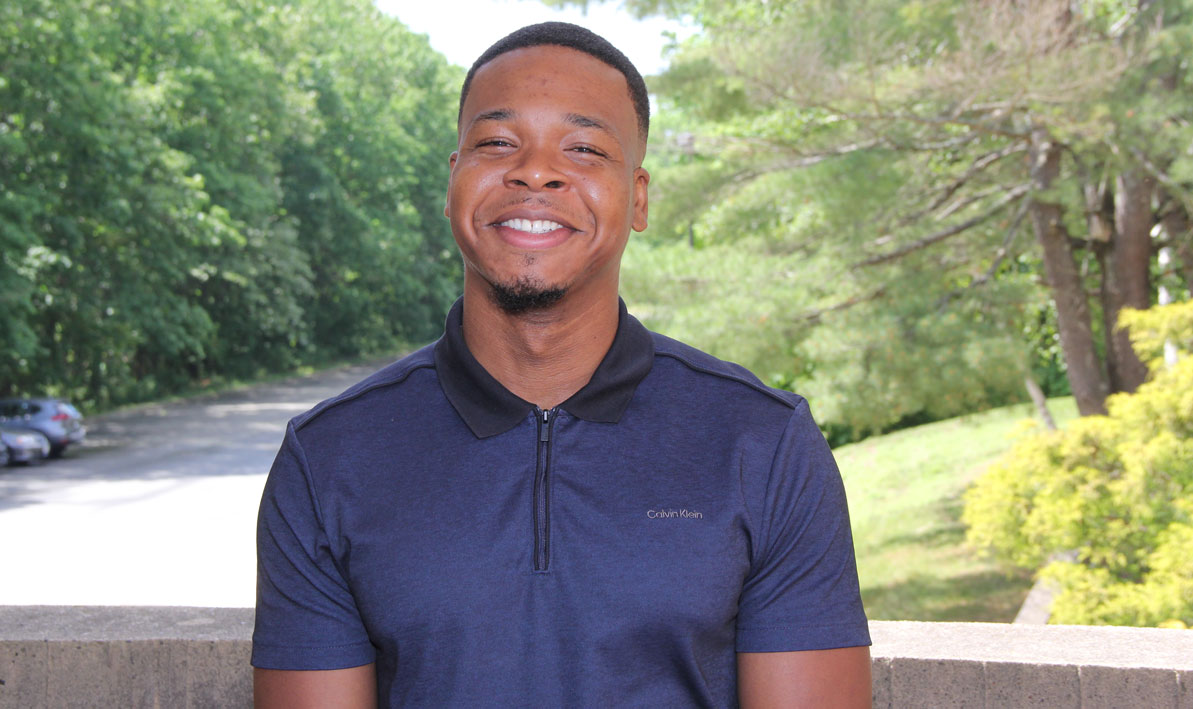 Romone Gordon thought he had the world figured out.

At 18, soon after graduating from Roger L. Putnam High School in Springfield, he took a warehouse job as a produce selector for C&S Wholesale Grocers. Meanwhile, he also took on a full course load at a local college.

After one semester, though, he dropped out.

"I thought I could work full time and go to school full time," said Gordon. "I tried it. I didn't stick to it. I wasn't interested in school then. I wanted to live life."

Ten years passed before he decided to try again, inspired by his girlfriend, an education advocate who then passed away.

"I was settling," he said, "but after that, a fire ignited in me, and then I just woke up every day wanting to go to school. And this is coming from someone who sucked at school."

The second time around, Gordon chose Holyoke Community College, based on the recommendation of his mother, an HCC alum, and the reputation of its student support services and Criminal Justice program.

"The moment I stepped foot in here I just knew this was it," he said. "Everything was so convenient. The help was there for me, and I just took advantage of it."

Gordon, now 31, made Dean's List every semester on his way to graduating June 4 with honors and his associate degree in criminal justice. In addition, he received the 2022 award for Excellence in Criminal Justice, which is given to the top student in that major.

Through his last year at HCC, he worked as an emergency services dispatcher at Amherst College – full time on the 3-11 p.m. shift. In September, he plans to begin working on his bachelor's degree in legal studies through the University Without Walls program at UMass Amherst. He's also in line for a police officer position in a Hampshire County town and hopes to attend the police academy this summer or fall. His long-term goal is to be a lawyer and even – someday, maybe – a judge.

"I'm very interested in policing, and I want to be in a position where I can make change," said Gordon. "I realized that I want my life to have meaning, and I just don't want to land in a job out of luck. Even if it's the best job in the world, if it's not intentional, I don't want it. I want my life to stand for something."

Gordon traces his interest in policing back to his earliest years growing up in Jamaica, where he was raised by a guardian until the age of 11 before emigrating to the U.S. to join his parents in Springfield.

"She worked at a police station, which was on the way to my school," said Gordon. "I'd stop by the station to hang out."

Later, as an adult, a less pleasant brush with the criminal justice system made him even more determined to study it.

"If you don't have knowledge of the system, it's easy to make a mistake that can just ruin your entire life," said Gordon.

He prefers not to discuss the details of his case, but said if he had gone along with the recommendation of "the system," he would now have a criminal record. Instead, he stuck to his innocence and was vindicated.

"How many people have made one mistake and fallen victim to a system that they don't understand?" he said. "Without education, I would have been in a terrible spot right now. So, yea, I think there definitely needs to be change. It affects plenty of people, not just black or brown. It affects everyone who doesn't have the education to make a good decision."

Gordon moved to Belchertown in 2018 and soon signed up for the town's citizens police academy, which gave him a broad overview of public safety operations in his new home town.

"I wanted to see what police officers do. I wanted to be more involved in the town and get to know people," he said.

Later, with the recommendation of his HCC adviser and criminal justice professor Adina Giannelli, Gordon landed a full-fledged internship with the Belchertown Police Department and later the dispatcher job in Amherst.

"One of the reasons I want to be a police officer is I want that to be a journey on the way to my being a lawyer, so, for me, it all comes together," he said. "I think I'm gonna forever continue to try to build my resume, just to get the experience that it's going to take for me to do my job, and to do it in the most ethical, most understanding, and most educated way."