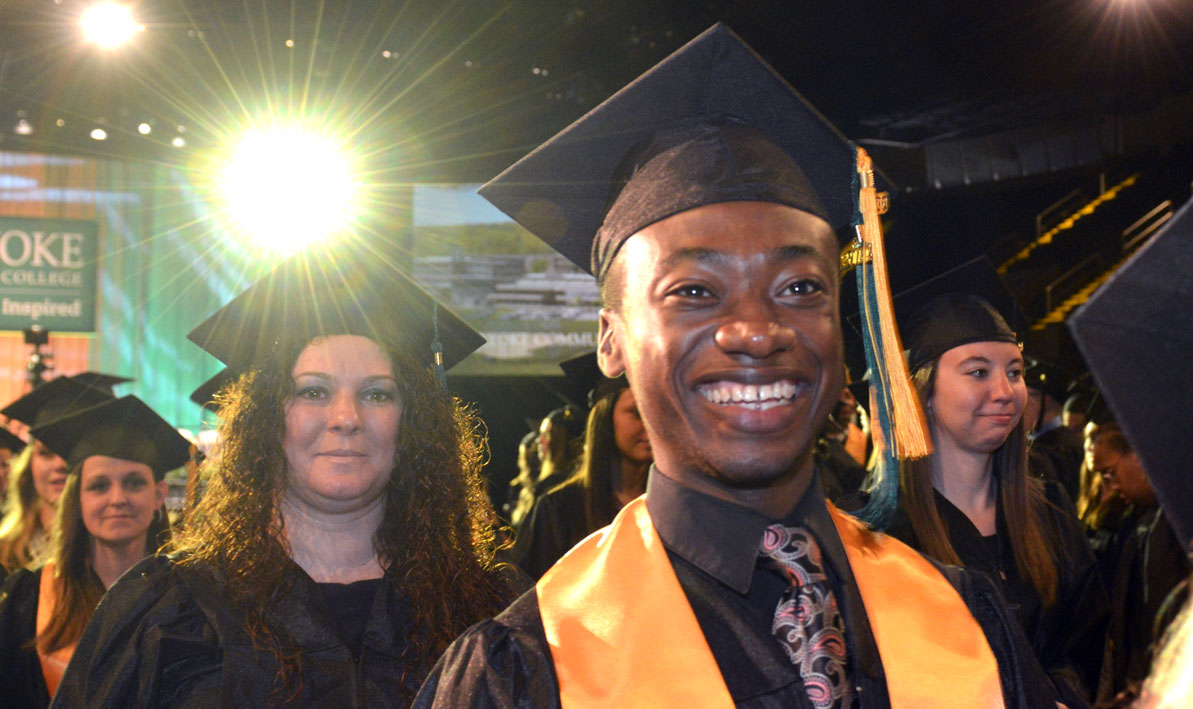 Editor's Note: Ugo Iyeh graduated from HCC in 2014 with his associate degree in nursing. Since then, he has been working steadily in western Massachusetts as a registered nurse specializing in home health care. For the past year, and throughout the COVID-19 pandemic, he has been employed by the Springfield-based agency, A Better Life Homecare.

As a student at HCC, Iyeh was selected as one of our Profiles of Excellence for Commencent 2014. Below is the profile about him that was published that spring.

As a child he watched foreign movies and television shows, read books by American authors and heard stories from friends and people he met. "When I was 13, I would have those dreams," Iyeh recalls. "I would think, okay, that is my destiny. I didn't know how it was going to happen. I just had that faith that it was."

Ugo, as he likes to be called, did all he could. He stayed focused in school and studied hard. When presented with the opportunity to take the SAT, he did and was accepted to several U.S. colleges, including American International College in Springfield.

He attended on a presidential scholarship and with financial assistance from a family sponsor in Africa. He studied biochemistry and planned to work in the medical field, inspired by the books of African-American neurosurgeon Ben Carson, author of Gifted Hands.

"My parents were not educated," says Iyeh. "But my dad especially had big dreams. He always said I was going to be a doctor. That was what he would have done if he had gone to school."

But after one semester at AIC, Iyeh's family support ran out, and he could no longer afford the private school tuition. He was faced with the prospect of returning to Nigeria.

Instead, he enrolled at Holyoke Community College. With a lot of hard work and a succession of scholarship awards from the HCC Foundation, Iyeh earned his associate degree in nursing at HCC's 67th Commencement – with honors.

"My father instilled in us all the discipline and work ethic and everything else," says Iyeh, who is 24 and lives with a Nigerian family in Springfield. "So I just grew up having high goals and expectations for myself."

Iyeh started at HCC in the Spring of 2011 in the Foundations of Health program, but was determined to complete all the prerequisites required for the school's competitive registered nursing program. He was accepted and started the two-year associate degree program in the fall of 2012.

Since he enrolled at HCC, Iyeh has worked on campus in the Center for Academic Program Supports, tutoring students in math and science. He is a member of the Phi Theta Kappa honor society, and in 2012 he was recognized with the CAPS award for tutorial excellence. He is part of the MAS (Multicultural Academic Services) program and has been a peer mentor for  ALANA Men in Motion, a campus support program for young men of color.

"I've made a lot of close friendships here and I've been privileged to work with good advisors, like Myriam Quinones (coordinator of MAS)," Iyeh says. "The community here and the structure here has been very meaningful to me."

Off campus, Iyeh is a member of the Redeemed Christian Church of God in Springfield and volunteers each month at the Friends of the Homeless Shelter, preparing and serving breakfast. He also sings, mostly gospel and R&B, and won the HCC talent show two years ago.

Iyeh recently received his authorization to work off campus and started a job as a CNA with Integra Home Health but hopes to work in a hospital after he gets his degree and earns his RN certification.

"I still want to go to med school," he says. "That's still my goal. I felt the nursing program was going to put me into the workforce sooner."

PHOTO by DON TREEGER: HCC alumnus Ugo Iyeh, RN, walks with his classmates at the MassMutual Center in Springfield during Commencement in 2014.