Christina Royal begins a new era at HCC as the college's fourth president. 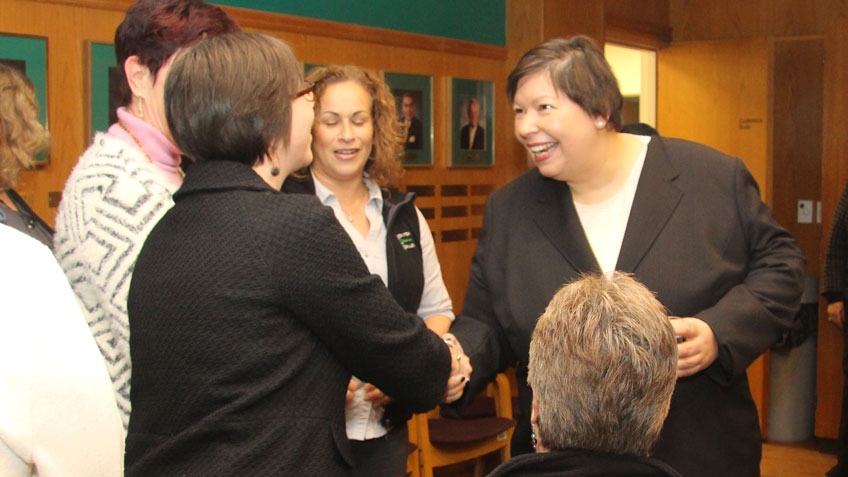 Editor's note: This story was originally published Jan. 9, 2017, on MassLive, with a photo gallery by Dave Roback of President Royal meeting with HCC faculty and staff.

STORY by JORDAN GRICE
Courtesy of MassLive and The Republican

History was made at Holyoke Community College on Monday as faculty and staff gathered to welcome the school's first female president.

"I think there is such great potential at this institution to build off of the great work that has already existed and to be able to take HCC to the next level," said Christina Royal.Royal said she wants to hit the ground running by supporting students and increasing enrollment.

"Student success is paramount at a community college and any institution," she said. "HCC has an excellent reputation for being a transfer institution, and I want us to continue to build off that."

Royal also acknowledged that as an Emerging Hispanic-Serving Institution — a distinction for colleges with a Latino student population between 15 and 24 percent — growth of the student body would yield future grant opportunities that will assist in her plans for the school.Royal said she is most looking forward to working with employees and students to "co-create our future."

"I'd like to look at how we can innovate at the institution, but I'd like to do it in partnership with others and having a chance to engage with the faculty, staff, students and community members," she said. "I'm looking forward to seeing those opportunities to collaborate. If we build up the college, we'll build up the surrounding western region, and if we build the surrounding region up the college will grow as well."

After former HCC President William Messner announced last February that he would retire, HCC went on a nationwide search for his successor. Through an extensive vetting and interviewing process, the school narrowed the pool of 50 applicants down to four finalists. HCC's board of trustees ultimately named Royal as the institution's fourth president on Nov. 3.

"We should be seeing more women and people of color in more leadership roles," Rome said.  "(Royal) understands how HCC needs to adjust to meet the needs of the community."

Royal's work history has prepared her to set the tone for HCC's future, Rome said.

PHOTOS by Hannah Wareham at HCC: President Christina Royal meets faculty and staff at a reception on her first day of work at HCC.