Through HCC's Early College program, Holyoke High School students are getting a head start on their college degrees. 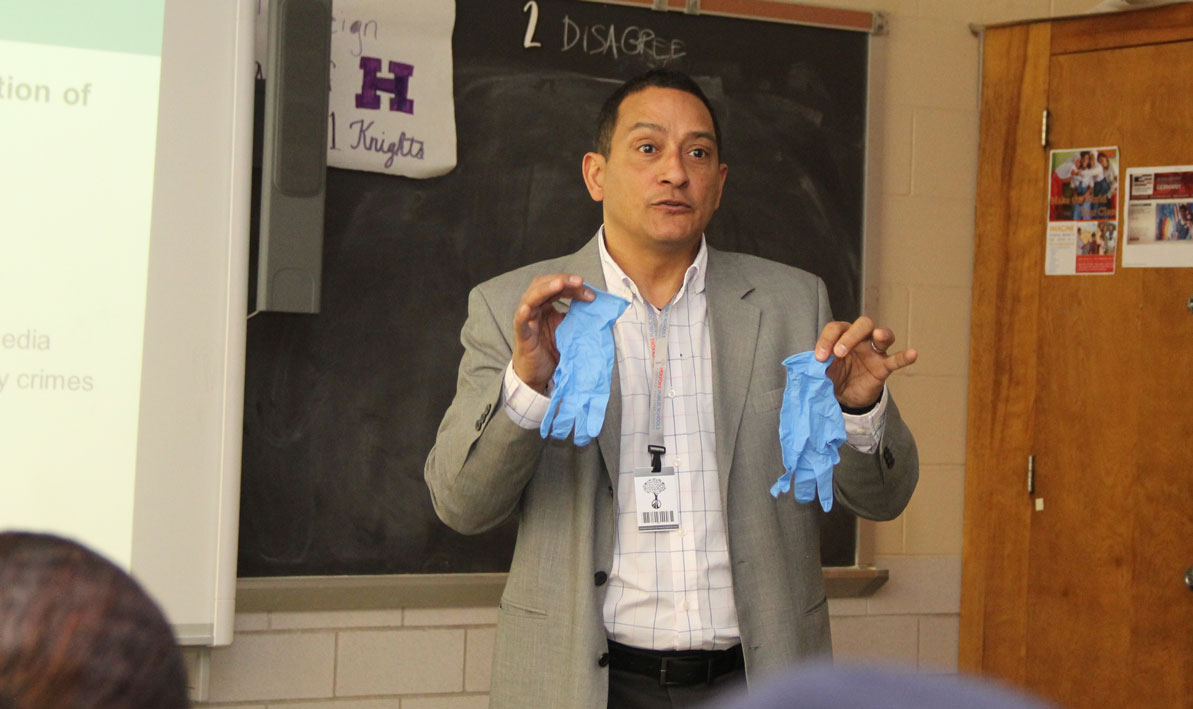 Students file in and out. There's a lot of end-of-the-week chatter combined with the vibration of awkwardly conjoined chairs and desks grating on linoleum as students wrestle into a comfortable orientation.

Once they settle, Sanchez offers a mild rebuke about missing assignments and a reminder that they are now halfway through the spring semester.

"You should check your grades," he says.

The day's lesson starts with a discussion of recent news headlines that relate to the subject of the class, Introduction to Criminal Justice. One student mentions the expanding legal troubles of the rapper R. Kelly.

Another brings up the gruesome story of the Colorado father arrested for allegedly murdering his wife and two daughters and disposing of their bodies in an oil tank. This leads into a lecture about the mundane nature of most police patrols, crime scene investigations and other such subjects that he seasons with tales from his 20 years as a police officer in Springfield.

"I've got a funny story about that," he says, before launching into what is more often than not a self-deprecating yarn in which he is the subject of the farce, like seeing his first corpse as a rookie (and then walking through the crime scene), crashing his cruiser into a stolen car (and letting the thief get away), being confronted with a large, sweaty, confused, naked man suspected of B&E, and answering calls about problem animals, such as a rabid racoon or a large moose.

Inevitably, they're laughing. He understands the material – and this audience.

The course is one Sanchez has taught routinely throughout his 13 years as a professor of criminal justice at HCC. The main difference here is that he is teaching this course at Holyoke High School, which he once attended. The students are all sophomores in their mid-teens.

Even so, at the end of the school year, if they pass his class, they will each earn three college credits. Similarly, in another Holyoke High School classroom, an HCC professor is teaching Introduction to Health Careers (for three credits), a third Introduction to Robotics (a four-credit lab science course), and a fourth Mass Communications (three credits) – the same courses offered on the nearby HCC campus for students in degree-seeking programs.

Early College is a new partnership between HCC and the Holyoke Public Schools meant to prepare high school students for college-level work, get them closer to a college degree, and help them defray the costs of their college educations.

In June, the state awarded HCC and HPS a $131,600 grant to establish the program, one of five such partnerships – and the only one outside the Boston area – to receive an official "Early College" designation.

"Many young people need an opportunity to see themselves in college so they can know it is possible for them," Carlos Santiago, Mass. commissioner of Higher Education, said when the grants were announced. "By giving high school students, particularly those who will be the first in their families to attend, the chance to succeed in college-level courses before they earn a high school diploma, we give them the confidence to know that a college degree is within their reach."

In Holyoke, Early College works like this. At the end of their freshman years, all Holyoke High School students must now choose a high school academy that follows one of four programs of study: Community and Global Studies; Technology, Engineering and Design; Medical and Life Sciences; or Performing and Media Arts.

In addition, up to 100 freshman each year can also elect to enroll in Early College. In the fall term of their sophomore years, these students take a special class at Holyoke High School known as AVID – Advancement via Individual Determination. The AVID class focuses on teaching students basic college skills, such as how to read a textbook, write a college paper, take notes and manage their time.

The AVID classes meet five days a week but on Mondays and Fridays in the spring term, the class is turned over to the HCC professors who teach their college courses. And on Wednesdays, HCC sends professional tutors from the college to work with students in each of the four classes – classes chosen to align with the four high school academies.

The Early College curriculum was created jointly by faculty and staff from HCC and Holyoke Public Schools.

"HCC already had a robust dual enrollment partnership with Holyoke Public Schools, as we do with more than 30 other high schools," said Renee Tastad, HCC dean of Enrollment Management and College Access Programs. "The Early College program kicks the preparation and support up a notch."

At full capacity, in fall 2020, up to 300 students in grades 10-12 will be part of the program. Next fall, as juniors, the 76 sophomores now taking college courses at Holyoke High School will take at least one course on the main HCC campus. By the time they graduate from high school, the participating students will earn a minimum of 12 college credits they can apply toward a degree at HCC or transfer to another college or university. And those credits won't cost them anything.

"Our dual enrollment kids are much more successful than our regular population, with a 90 percent course pass rate compared to 70 percent," Tastad said.

In early March, the Holyoke Public Schools announced a marked increase in the high school graduation rate and a decrease in the district's dropout rate over the past five years, crediting, in part, expanded academic opportunities, such as the district's dual enrollment partnership with Holyoke Community College.

Since 2013, the number of Holyoke High School students taking college classes at HCC has increased from two to 72 in the fall of 2018. Those numbers don't include the 76 now enrolled in Early College or another 40 from Holyoke in HCC's Gateway to College program, which puts high school dropouts and students at risk for dropping out into college classes where they earn credits toward their high school diplomas and toward a college degree. With a graduation rate of 76 percent, HCC's Gateway program has been held up as a national model of success. Many continue on at HCC after completing the Gateway program.

"In our experience, with proper challenge and support, students who never envisioned college for themselves can find success in college coursework, see themselves as college students, and start on the path toward earning a degree," Tastad said