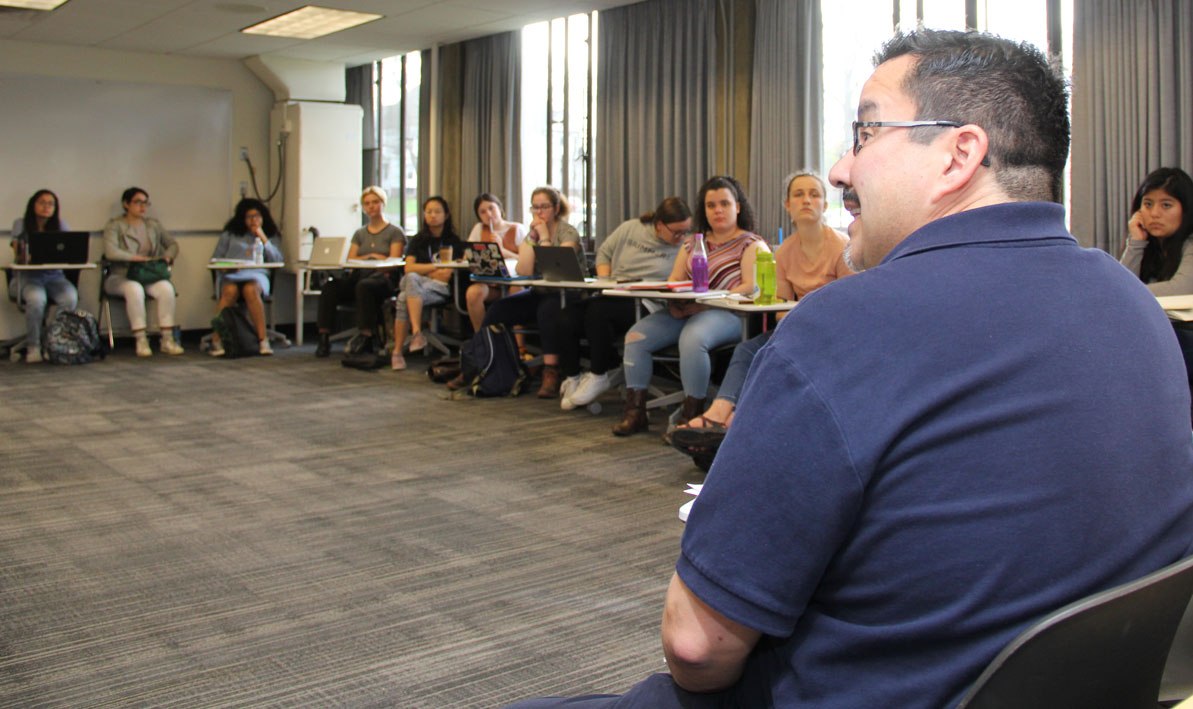 On a recent Monday afternoon, students in a Mount Holyoke College classroom were talking about tipping, specifically the "dysfunctional" tipping system employed in most U.S. restaurants, as described by author Saru Jayaraman in her book Behind the Kitchen Door.

One student with a lot to say on that subject was Armanis Fuentes, a history major from Springfield, who noted the "racial hierarchies" inherent in a system where managers often assign the best tables and schedules to their white staff.

Yashera Roperto, a second-year liberal arts major from Northampton, who waitresses in that town, concurred.

"A lot of people work so hard, and we don't get compensated for the work we do," she said. Jayaraman's book "made me think about situations that go on in my life."

Fuentes and Roperto are both students at Holyoke Community College enrolled this spring in "Aliens, Anti-Citizens and Identity," an inter-institutional Learning Community course made up of students from both HCC and Mount Holyoke.

Like all HCC Learning Communities, this one combines two academic subjects focused on a single theme (in this case philosophy and Latino Studies in an examination of the unequal treatment, or alienization, of certain demographic groups within American society).

Unlike most Learning Communities, "Aliens" was taught jointly by professors from two different colleges (HCC philosophy professor Don Hanover and Mount Holyoke Latino Studies professor David Hernandez) and met for half the semester on each campus.

"Aliens" was also one of a bunch of co-institutional LCs offered for free to HCC students over the past few semesters, thanks in part to a grant from the National Endowment for Humanities. For the 2018-2019 academic year, HCC ran free LC courses together with Smith College, Bay Path University, Hebei University of Science and Technology in China, as well as the one with Mount Holyoke. HCC also regularly runs a co-institutional LC every two years with Amherst College called "The Immigrant City," a political science and history class focused on Holyoke.

LCs, as they are known, typically count as two courses, so students earn double credits, six instead of three. They can save as much as $1,000 in tuition and fees for the semester if they sign up for the free ones.

According to the "Aliens" course summary, students "will examine marginal and alien citizenship statuses as they are situated within contemporary capitalist society in the United States."

Use of the word "anti-citizens" in the course title refers to "persons who are citizens of the U.S. who are still treated differently," Hernandez said. "There are all these institutions that can discriminate against people. Everyone's not getting a fair shake."

The student-led conversation about tipping generated comments about immigration, race, poverty and privilege – all key themes of the course.

Hernandez said the class benefited from having diverse perspective, like those offered by Fuentes and Roperto.

During the semester, students have read works including: The Communist Manifesto: A Roadmap to History's Most Important Political Document, by Karl Marx and Frederick Engels, edited by Phil Gasper; Undocumented: How Immigration Became Illegal, by Aviva Chomsky; and The Straight State: Sexuality and Citizenship in Twentieth-Century America," by Margot Canaday.

"All the books we have been reading are about how the working class is struggling," Hanover told the class.

In a lot of ways, the subject matter couldn't be more timely, given the current political climate in the country, especially as it relates to immigration and border control. For instance, Hanover said students were stunned that the Communist Manifesto, "could capture what we're discussing today."

"Where is the party in opposition that has not been decried as Communistic by its opponents in power?" Marx wrote in 1848.

Cut to 2019, and on Fox and Friends, a co-host recently called one of U.S. Rep. Alexandria Ocasio-Cortez's proposals "socialism and communism on display."

Both then and now, Hanover said, "If you want to pillory the other side, you dismiss them as Communists or Socialists."

The other books show "how citizenship is denied by the 'othering' of those considered undesirable," he said.

Fuentes, who was born in Puerto Rico and raised in Holyoke, knows something about this word, defined as "treating people from another group as essentially different from and generally inferior to the group you belong to."

"Even though I'm a citizen, I don't feel fully American," he said. "There's a sort of living in two worlds."

He said the "Aliens" class followed a format similar to that of other Learning Communities that he has taken, including The Immigrant City.

"It started out high-concept and went into peoples' stories, how capitalism exploits people," he said. "It was definitely enlightening."

Discussions might not be the end of students' experience with the subject matter.

"A lot of the books have call to action. You can organize around these things," Hernandez said.