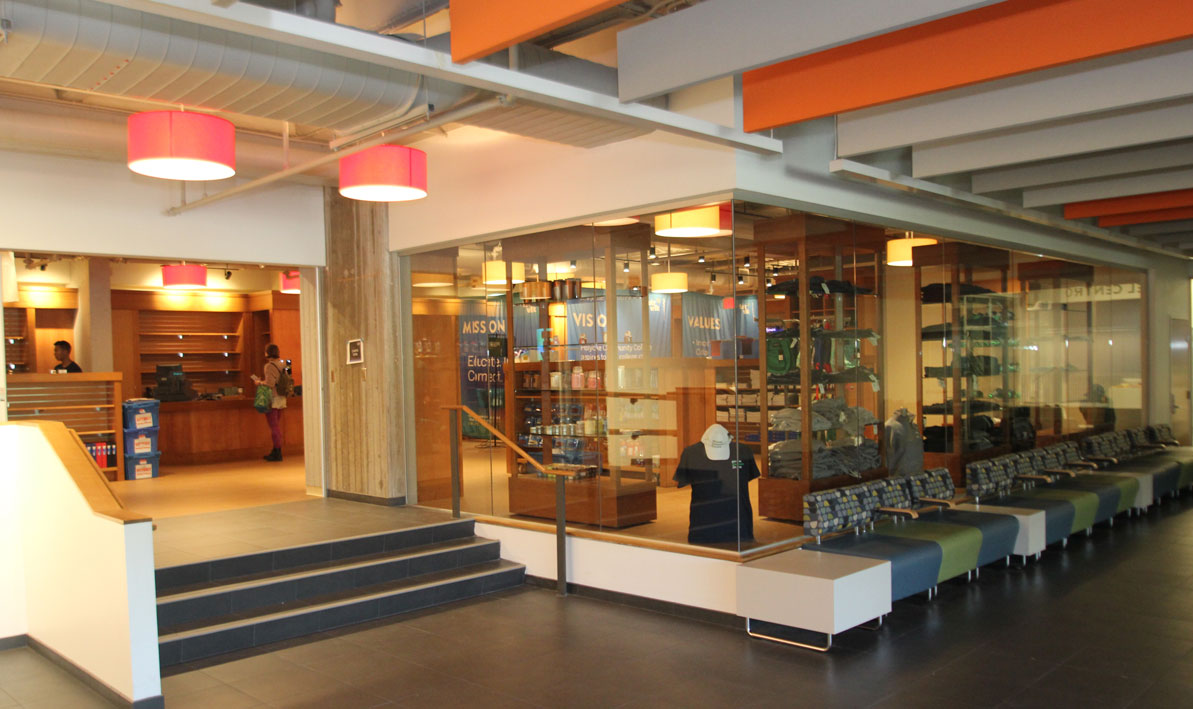 The College Store is back where it belongs.

After a two-year sabbatical of sorts, a new and improved College Store opened Monday on the second floor of the HCC Campus Center, a floor above where it used to be before the building closed in the spring of 2017 for a $43.5 million makeover. (For the past two years, the store operated out of two reconfigured classrooms on the first floor of the Donahue Building.)

That's just one of the many changes that awaits students and faculty as they return for the start of the fall semester on Tuesday, Sept. 3.

Earlier this month, HCC relocated its Admissions offices to the first floor of the Campus Center, as well Advising, Career, Transfer and Testing. All of those areas are now easily accessible from a new Visitors parking lot on the east side of the building with a dedicated walkway and bridge over Tannery Brook leading through a new front door into the main lobby.

On Monday, Bill Fogarty, vice president of Administration and Finance, led members of HCC's Board of Trustees on a tour of the renovated facility, where workers continued their finish work, newly enrolled students engaged in orientation activities and prospective students met with counselors in Advising and Admissions.

One of the key features of the internal space are the glass doors and partitions between offices.

An enhanced Food Court and Cafeteria is expected to open soon on the second floor, with HCC's Subway franchise moving back to the Campus Center after operating for two years in the Frost Building. Students will also find expanded dining areas and lounge space outside the College Store.

This new Student Engagement area includes Student Activities, which moved out of its cramped quarters in Donahue and now enjoys expanded office and meeting space that it shares with the Student Senate and Student Clubs. On Monday, one of the meeting rooms was being used by New Student Orientation leaders as snack station and snooze zone.

"It's going great," said Lauren Leclair, Success Initiatives and New Student Orientation coordinator. "I've received a lot of good feedback from students. They are really excited about how it all looks."

"Sometimes our programming would spill out into the hallway," said MAS coordinator Myriam Quinones.

El Centro has its own reception area and two offices opening into a large shared space with lounge chairs, computer stations and study tables.

"The idea is to attract students in here to engage," she said. "I've been waiting a long time for this. I'm very excited."

"I can tell by that smile on your face that you're excited," said trustee Ted Hebert.

On the third floor, the Media Arts Center, home to HCC's Electronic Media and Photography programs, is set to reopen for the start of the semester, with a new ventilation system, ceilings and lighting.

About 9,000 square feet was added to the previously 57,000 square-foot building. An atrium entrance was added off the HCC Courtyard on the west side of the building and an external walkway on the second floor was enclosed and the building's sloping facade squared off.

The main impetus behind the project was to waterproof the building, which had been plagued by severe leaks since it first opened in 1980.  The entire Campus Center has been encased in a new skin, Fogarty said.

"If it works, it's something that could replicated on our other campus buildings," he said.

The relocation of programs and offices leaves open spaces in other buildins and backfilling those areas has already begun.

Among the other changes, so far, Veterans Services and The Bunker Veterans Resource Center have moved into Donahue 105, former home of Student Activities. That space will now be known collectively as the Veterans Center. A new Veterans Lounge will be located across the hall in Donahue 138.

The space in Donahue 103 that previously served as the reception area for Student Activities has been walled off and now belongs to the college radio station, WCCH, which will also be using a room across the hall in Donahue 128 for podcasting and will share that space with Apex, a new student multimedia magazine.

Check out more photos in our Facebook photo gallery.