Who's on first? Coach D

"I always wanted to play, and I have this very small window of opportunity. I decided to give it my best shot." – Tony Dismukes 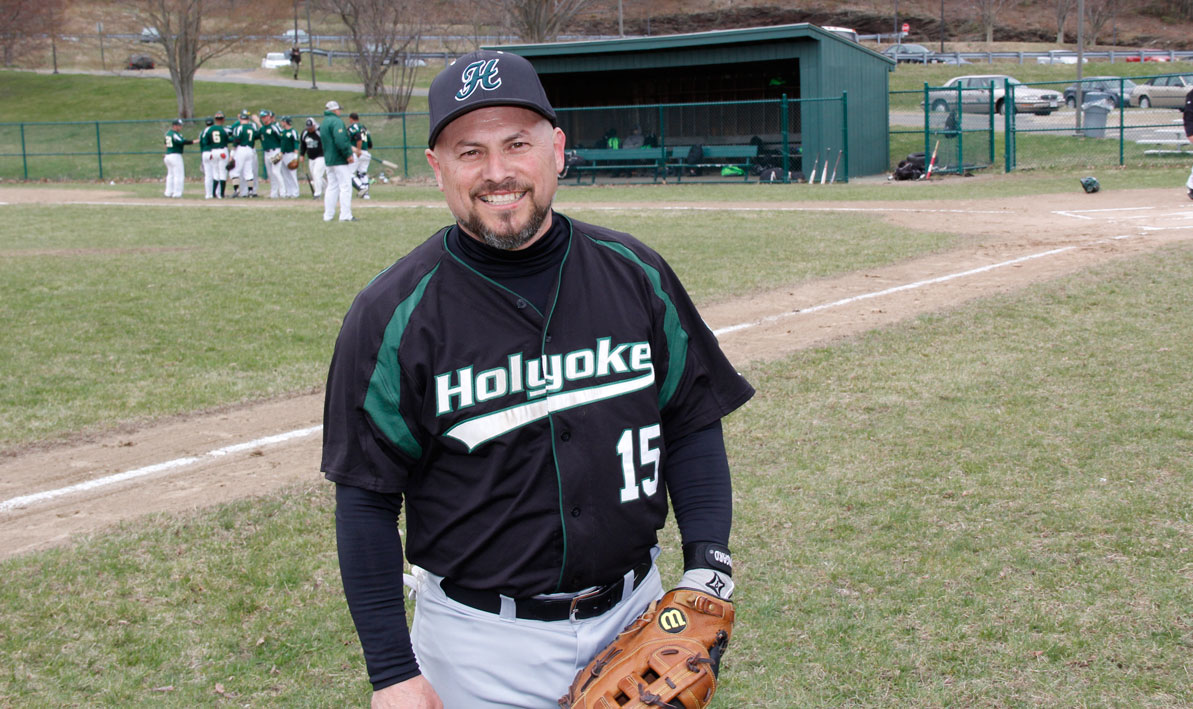 Tony Dismukes has led quite a varied and colorful working life.

He joined the U.S. Navy after high school and served in radio communications aboard an aircraft carrier and a guided missile cruiser. He met his wife in the service, and they raised two children in Rhode Island and later in Belchertown, where he still lives and owns a hardwood flooring business.

After the Navy, he joined the Air National Guard. In recent years, he has worked as an airport officer for the national Transportation Security Administration. For a while, he was the technology education instructor at Monson High School, teaching architecture, engineering, manufacturing, and wood shop.

Aside from his family, the one constant through it all has been baseball.

The Montgomery native was a star high school athlete at Central Alabama Academy and played for the Navy base team when he was stationed in San Diego. He even helped start a Babe Ruth league in Scotland during the three years he was stationed there. He was the varsity baseball coach at Monson High for five years and has worked as an assistant baseball coach at Amherst College and Fitchburg State College and spent one summer as an assistant coach for the North Adams Steeplecats, a team in the New England Collegiate Baseball League.

"I've always loved baseball," says Dismukes, an affable and unmistakably Southern man, who smiles and laughs a lot and talks in a drawl thick as the proverbial molasses. "I've just always been involved with it."

His dream is to one day be a head college baseball coach. But in his search for jobs he's been told by athletic directors that there was one important qualification missing from his resume – collegiate playing experience.

This spring, the 54-year-old Dismukes plays first base for the Holyoke Community College Cougars.

"I always wanted to play," says Dismukes, "and I have this very small window of opportunity. I decided to give it my best shot."

To get ready, Dismukes began training two months before the semester started. He is thick-limbed and stocky, built like a wrestler, which he was in high school when he was a two-time Alabama state champion at the 126-pound weight class. He is somewhat heavier than that now, but still looks strong and fit.

"I don't smoke or drink," he says. "I'm in pretty good shape. I didn't expect to start cause these kids are great. It's not that I can't hit or catch like they can. I can. It's just that I'm slower."

He is by decades the oldest player on the team, older even than head coach John Crowley. When Dismukes first declared his intention to try out, Crowley says he didn't think he was serious. Dismukes quickly proved otherwise.

"He works out. He's good in the cage," Crowley said before a recent home game where Dismukes was warming up for a start at first base. "He's an inspiration for these kids. He's going for his dream. He's a real big help. He does whatever we say. He's just very motivated to play ball. I think he'll succeed."

In the second game of the season, in his first at bat as a college baseball player, the right-handed Dismukes singled and drove in a run.

"So one of my dreams has already come true," he says. "I'm just having a great time out there."

As the starting pitcher in a recent game, Dismukes had a no-hitter going into the fourth inning -- until he gave up a homerun.

"His whole family was there," said Coach Crowley. "He was so proud of himself."

To be eligible for the team, Dismukes had to enroll as a full-time student, so he's taking classes he doesn't really need with no intention of pursuing a degree.

"The nice thing is, I got to pick classes that will help me instead of taking classes I have to take," he says.

He's taking three courses for 12 credits: public speaking, computer applications and English grammar and writing. His teachers all understand his circumstances, and even though his grades don't matter, he takes his classes as seriously as baseball.

"I don't like to do bad," he says. "I wanna do good. And sometimes I don't get any sleep cause I'm writing a paper or doing something for school, and, to be honest with ya, my body I can feel starting to break down. I'm sore and tired all the time. As much as I love this, when these two months are over, it's gonna be like a vacation."

His schedule is one that would be rough on the toughest college student. He wakes up at 2 a.m. to get to Bradley International Airport in Windsor Lockes, Conn., for his 4 a.m. to 9 a.m. shift as an airport security officer. After work, he comes to HCC for classes. In the afternoon, he plays baseball, and he's usually in bed by 7 p.m.

"I wished I woulda gone to college after high school, but I wasn't ready," he says. "Academically-wise I wasn't there, to be honest with ya. It's kinda funny. This private school paid my way to play sports. I had a chance to go to college to play baseball and wrassle, but I was too scared to go, so I joined the military."

HCC, though, is not his first stint as a college student. He earned a bachelor's degree in resource management from Troy University in Alabama while he was in the service. He subsequently earned an associate degree in business administration while his wife, a career naval officer, was stationed in Rhode Island.

"She's the smart one," he says. "I'm just the dumb jock. It took me a long time. I never did think I would get a degree. I'm just not a school person, but my wife kept pushing me to take classes."

At first, Dismukes says, he had to adjust to the mindset of being a player instead of a coach. At times, he's had to step back and simply listen.

"Everybody's got their own way," he says, "but I don't wanna say anything. I wanna do what they tell me to do and smile."

He says he picks up equipment like all the other players and he understands the unique experience he's gaining as a collegiate player.

"Being on the other side in the locker room, hearing them joke around and talk about what they like about being on the team, what they dislike, that part as a player is very beneficial," he says. "That's what I was missing as a coach. I'm always learning stuff."

Initially his teammates thought he was just another coach and he was worried they might not accept him as a player, even as they tried to guess how old he was. He says he gained their respect during a team push-up contest in which he came in second.

"I can't say enough about these ball players," he says. "They're scrappy, they're nice, they kid around with me. They treat me just like everyone else. I've been having the best time with them."

During tryouts, he bumped into a former student and junior varsity baseball player who recognized him from his days coaching at Monson High School.

"He said, are you trying out for the team? I said, believe it or not, yes, I am, Matt. He said, that's great. I guess that means I can call you Tony. I said, let's get something straight. I'm an old, southern guy. During the season you can call me Tony, but after the season, it's back to Coach D."

STORY and PHOTOS by CHRIS YURKO: Fifty-four-year-old Tony Dismukes is playing first base for the HCC Cougars this season.