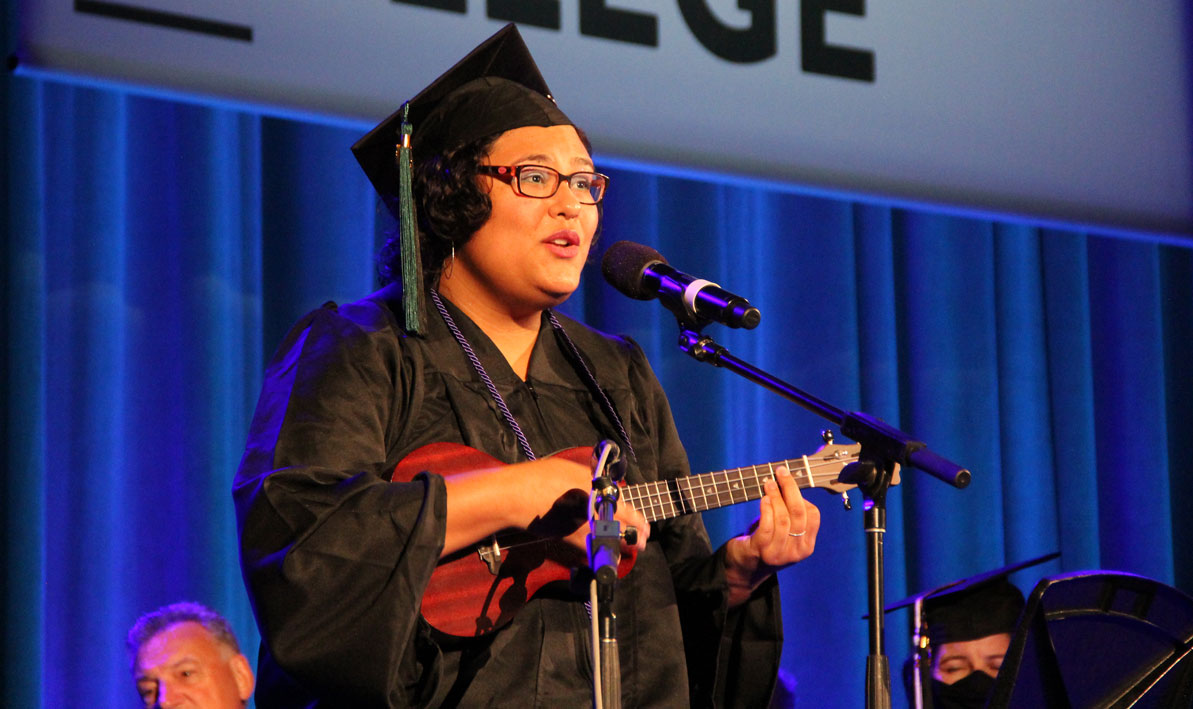 "When reflecting on his book, The Very Hungry Caterpillar and its illustrations, Eric Carle describes how the story is one about hope," said Gould, the faculty speaker at HCC's 75th Anniversary Commencement. "For the past two years, we have had to cling to hope, and often dig for it. But you all did more than hope. You worked towards a goal and achieved it."

On Sat., June 4, HCC celebrated 665 graduates from the Class of 2022, as well as dozens more  from the classes of 2020 and 2021, which had been denied in-person graduation ceremonies because of the COVID-19 pandemic.

Even as the event at Springfield's MassMutual Center followed the same script as previous ceremonies there, the pandemic – as well as other global events – loomed large in the remarks of Commencement speakers.

"Our world has been affected on so many levels, personally, professionally, culturally, spiritually, and academically," said President Christina Royal. "And in the midst of it all, you made the decision to get a college education. You persevered through the most unpredictable circumstances and decided to forge ahead."

And now, she continued, "you have something very certain – a college degree. Your education is designed to prepare you for the world in which you're graduating."

HCC awarded a total of 691 associate degrees and certificates to its Class of 2022. Graduates range in age from 18 to 65 and hail from 66 different Massachusetts cities and towns as well as the states of Connecticut, Vermont, Florida, North Carolina, and South Dakota, and the countries as far away as Tanzania, Turkey, and Vietnam.

As recipient of the 2022 Elaine Marieb Award for Teaching Excellence, Gould, an associate professor of Education from Chicopee, led the procession of graduates, faculty and staff into the arena and gave the faculty address. In her speech, Gould referenced the Itsy Bitsy Spider and encouraged graduates to follow the wisdom of Mr. Rogers, represented on the podium in the form of a bobblehead doll.

"According to Fred Rogers, my other obsession, 'The greatest gift you can ever give is your authentic self," she said. "I know that to be true personally as a former HCC student and now as a faculty member ... As you make connections and expand your web, please remember to lead with love, lead with joy, lead with kindness, and be brave enough to be your authentic self and hold space for others to do the same in your presence."

Class speaker Yannelis Cruz talked about the "irrational" stigma many still attach to a community college education, and how, despite initial self-doubt, HCC helped her gain the confidence to pursue her associate degree in biology in the hopes of one day becoming a pediatric surgeon.

"I truly believe my experience here was something I would not have gotten from any other institution," said Cruz, who is from Springfield. "I am proud to be a part of HCC and its diverse community. At times I felt maybe college was not meant for me or maybe I was not smart enough to continue. And while I've had my fair share of struggles, I stand before you as the first woman in my family to graduate college – and I will continue my education after this."

Cruz noted that, through HCC and her work as student trustee, she had learned to be an agent of social change.

"I realized at HCC that I could make an impact in my community and family one day, to be active in social movements that would change things for the better," she said. "And because of HCC, I have a support system I would never have thought I would have, one that allows me to be of service to others in my community, to help make invisible people visible and to give voice to the voiceless."

In other highlights from HCC's 75th Anniversary Commencement, the college awarded its Distinguished Service Award to Springfield entrepreneur Mychal Connolly, an HCC alum from the class of 2004 and owner of Stand Out Truck, a digital mobile billboard company. Liberal arts major Deanna Bach '22 of Longmeadow, accompanying herself on the ukulele, performed "Looking to the Future," an original song she wrote for the occasion. Elena Ciampa '22 of Florence also performed an original song, "Bust it Out," she sang with the HCC jazz combo. Carolyn Sicbaldi '22 of South Hadley presented the class gift, a flowering dogwood tree with a plaque at its base that also recognizes the classes of 2020 and 2021.

PHOTOS by CHRIS YURKO: (Thumbnail) A member of the Class of 2022 celebrates after receiving her diplooma. (Above) Deanna Bach performs "Looking to the Future" at HCC's 75th Anniversary Commencement on Sat., June 4.