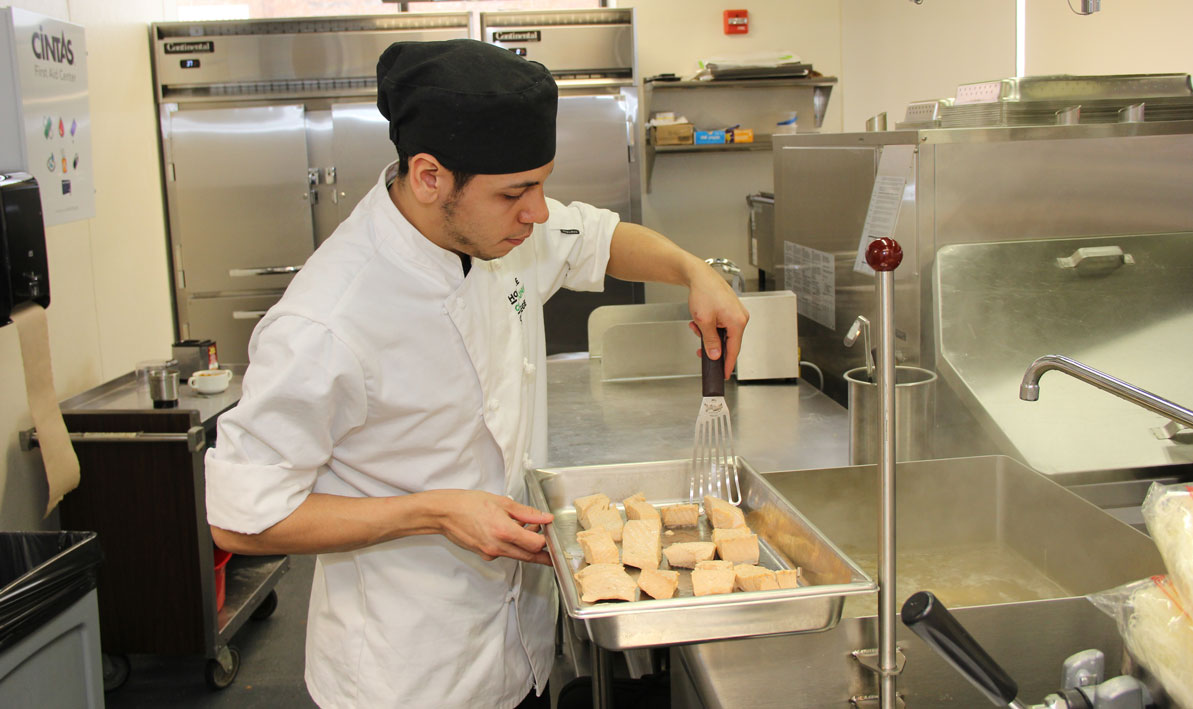 During his first semester as a culinary arts student at Holyoke Community College, Tyler Carrier wrote a paper about a commercial kitchen appliance known in the industry as an Alto-Shaam, after the company that manufactures them.

An Alto-Shaam is a special kind of oven, a "combitherm" oven to be exact. The beauty of the "combi" is that it can cook using steam or convection heat or some combination of the two.

At the time, Carrier had never used an Alto-Shaam nor had he ever seen one. That was the assignment: Write about an unfamiliar piece of kitchen equipment.

"I was researching fancy equipment, and that came up," he remembers. "I thought it was really cool."

A fall 2017 graduate, Carrier earned both his Culinary Arts certificate and associate degree in Food Service Management from HCC. He now works for the college as a lab tech at the HCC MGM Culinary Arts Institute, ordering food and supplies, keeping the kitchens clean and helping out with classes.

The 20,000-square-foot, $6.43-million facility opened in January 2018. Since then, Carrier has spent a lot of time in the institute's five, gleaming, stainless steel kitchens. His favorite is the first-floor production kitchen, the most advanced and the one designed like a professional, European-style, restaurant kitchen. He likes the layout, and he likes the tools. Among the modern, high-tech appliances and fixtures is an Alto-Shaam, and that, he says, is "super cool."

"When I first came to the program as a student, this was only talk," the 21-year-old Easthampton resident says about the insitute. "There were no pictures. There were no diagrams of the new kitchens. And then I got to be part of the process. So, for me, going from being a student in the old facility to working with students in the new facility, I'm super excited, and I'm very grateful to be part of it."

The HCC MGM Culinary Arts Institute occupies the first two floors of a renovated industrial building called The Cubit in downtown Holyoke, Mass. It has been a tremendous hit with students, faculty, staff, state and local officials, employers and community groups since day one.

"We are so excited," HCC student Behnam "Ben" Alimarzei '18 said at the time, speaking soon after the opening for himself and on behalf of his culinary arts classmates. "Everything's brand new. New building. New equipment. New technology. It's beautiful."

Students were so eager to get in they began showing up an hour and half early for classes on the first day of the Spring 2018 semester when the Culinary Arts Institute officially opened.

"This is what I was hoping for, and I'm all excited about it," Chef Warren Leigh, chair of the Hospitality Management and Culinary Arts programs, said then. "If I'm a student, I'm thinking, this is my place."

The old place, on the main HCC campus, was stale as old bread, undersized and out of date. Before the move downtown, HCC's Culinary Arts program lived on the second floor of one of HCC's oldest academic buildings. The program space included a single, all-purpose teaching kitchen (for both credit and noncredit programs) and a small bakeshop, plus an adjacent room for special events. It was tight, without a pinch of room to grow.

HCC is one of only a handful of public colleges or universities in Massachusetts to offer a program in culinary arts and it is the only one with a culinary arts program accredited by the American Culinary Federation, offering both a one-year certificate and two-year associate degree.

"HCC offers students the opportunity to complete a culinary school or university-caliber culinary education at an affordable price and with a unique level of attention and support," says Kristine Ricker Choleva, interim dean of Business and Technology. "Students leave the program poised to enter the workplace or move on to further education."

Talk of finding an off-campus home worthy of the program began in earnest in 2014 after the announcement that MGM Resorts International would be building a $960 million resort-casino in Springfield and the realization that hundreds of new culinary and hospitality jobs would follow, putting increased demand on an industry that was already underserved.

The idea got a boost that year when the state awarded HCC a $1.75 million economic development grant to build a cutting-edge, culinary arts center in Holyoke's Innovation District that would continue the revitalization of the city's downtown and also address regional employment needs. In subsequent years, as planning continued and a location secured, HCC received additional financial support from both public and private sources: the U.S. Economic Development Administration, the city of Holyoke, the governor's office, the HCC Foundation, and MGM.

The result was a $6.43 million facility in the square, red-brick former factory known as The Cubit on the corner of Race and Appleton streets, right along the city's second level canal.

At the grand opening celebration in April 2018, Lt. Gov. Karyn Polito noted the small part the governor's office played in its development, with a $229,000 allocation through the state Executive Office's Workforce Skills Capital Grant Program "to put in state-of-the-art equipment that you have all been able to see today."

"This is a learning lab," she said. "Allowing people to learn the subject matter and then apply it to hands-on learning – there is no substitute for that. And this is a learning lab that we are looking to replicate in other parts of the state, not just in culinary arts, but in advanced manufacturing, engineering and life sciences."

In June 2018, the Boston Foundation awarded HCC won the Deval Patrick Prize, which recognizes community colleges that do an outstanding job partnering with employers to build effective career pathways for their students.

In announcing the award, Rosalin Acosta, Mass. secretary of Labor and Workforce Development, cited HCC's efforts to scale up the labor pool to meet the needs of employers in the hospitality and food service industry, add workforce training programs for job seekers and incumbent workers, align the curriculum to meet industry needs, develop stackable workforce credentials, and increase community engagement around issues such as food insecurity. Most impressive, she said, was the opening of the HCC MGM Culinary Arts Institute in HCC's Innovation District.

"The facility is the region's only state-of-the-art hospitality and culinary arts center and will help increase experiential learning opportunities, especially for hands-on training," she said. "This is a primary example of Holyoke Community College's amazing ability to anticipate a workforce need and partner with an employer to address that need."

HCC students and staff now have at their disposal five kitchens, each with a unique design and purpose, a large banquet-sized dining room, three smart classrooms, staff offices, lockers, conference space, student lounges, and much more. The facility is big, open, airy, clean and bright.

"It's fantastic," said Nate Waugaman, executive chef at MGM Springfield, who visited the site during construction and again after it was done. "Pretty impressive. It's a huge leap from the previous facility. It's going to make a huge difference in the ability to train students with modern equipment and what we actually use in the business today. I'm really impressed with the way it's come together."

For instance, the production kitchen has a pasta cooker (before they just used pots), a self-draining deep fryer (with a faucet that supplies fresh oil), plate warmers (so they no longer have to stick dishes in the oven before serving), two bain-maries (cold or hot water basins), heat lamps on retractable cords (to keep food warm), heat-sensing exhaust fans (that automatically turn on) and a long, stainless steel chef's table (for plating or seating for small parties of 8-10 people who want to watch as their food is prepared).

And there's that Alto-Shaam.

"I would say we have just about anything new that's being used or just starting to be used by independent restaurants," said Leigh – "to prepare students properly for what's happening out there now."

"Now we can have anything we can think of for professional development in one facility," said Leigh, "and this is what we've been talking about: If anybody is thinking of any kind of food or beverage solution, whatever that means for them in our industry, they should be calling HCC."

Holyoke Soup, a community-based, crowd-funding program for new artists and entrepreneurs, part of SPARK Holyoke, is now holding its events here. So is the Greater Holyoke Chamber of Commerce.

"MGM made an investment here, and everybody knows that," said Michele Cabral, former interim dean of Culinary Arts, "so we have a really good relationship with them."

The resort-casino opened in August 2018, and, as expected, many students and graduates from HCC's Culinary Arts program have gone on to work for MGM, which employs close to 3,000 people, including about 800 in food service.

Area employment needs extend well beyond MGM, though. According to Jeffrey Hayden, HCC vice president of Business and Community Services, who oversees the culinary and hospitality workforce training programs, a 2017 regional survey identified 1,700 vacant jobs in food service and hospitality in Hampden County alone, and HCC is working with dozens of other employers to fill them.

The new facility and its multiple kitchens will allow for increased capacity in all programs, credit and noncredit, and the college has revamped its curriculum to add a new associate of science degree program in culinary arts. Plans are also in the works to add a baking certificate into the mix.

Leigh expects the HCC MGM Culinary Arts Institute to become a favored location for all kinds of community and regional events, such as cooking competitions, celebrity chef demonstrations, conferences and more.

Beyond that, he believes the institute will draw students who might have previously gone elsewhere for their culinary training.

"There is no state-owned institution like this in New England," Leigh said. "We have the most current, purpose-built culinary arts facility in New England. Maybe for the Northeast. I don't know if I'd be that bold, but it could be."