He liked it here 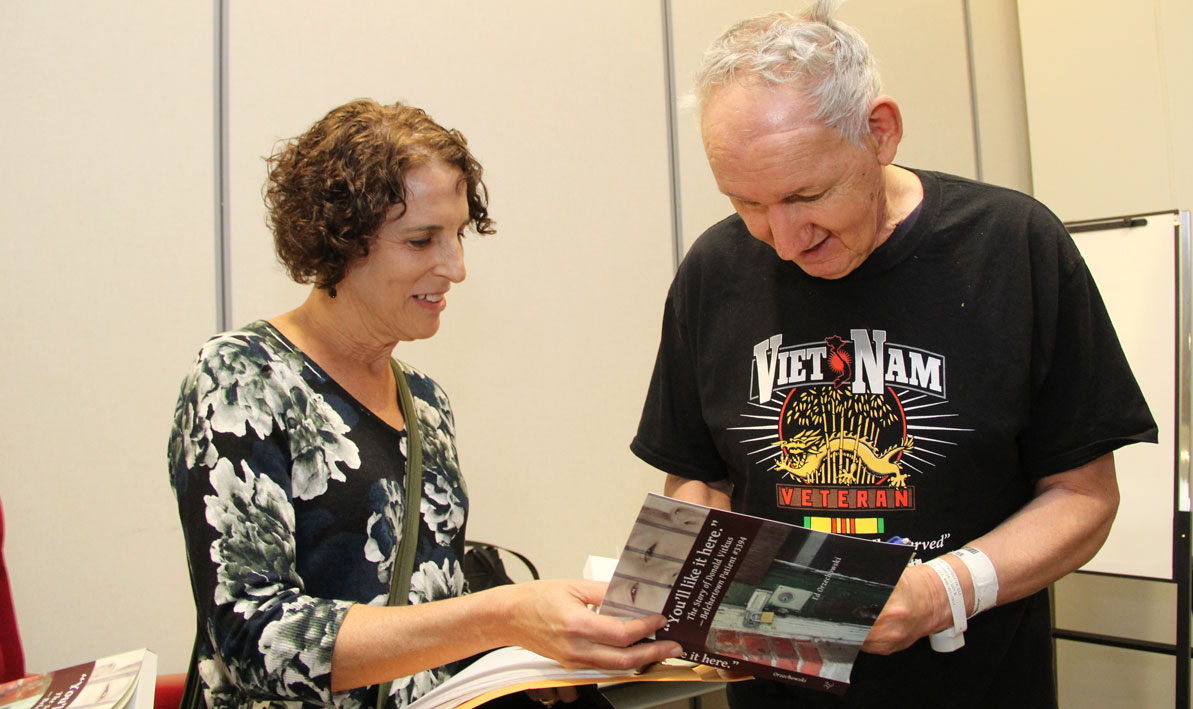 With every handshake, Donald Vitkus leans in. He is tall, with silver hair and engaging, bright gray eyes. His black T-shirt says "Vietnam Veteran" on the front. He wears it to remind people he was there.

There are a lot of handshakes. Everyone wants to meet him. They line up.

"What brings you here?" he says to each in turn.

The question surprises them. The answer seems obvious.

There's an immediate connection, in the hand and from the heart. They already know his story, captured in the book "You'll Like It Here": Donald Vitkus - Belchertown Patient #3394, by Northampton author Ed Orzechowski. Orzechowski is in the back of the room, signing books, following a presentation here at HCC.

Vitkus is up front, shaking hands, holding on. He wants to know more.

One young woman tells him she was raised in a group home. More than a few say they had relatives — a sister, a brother, an aunt, a son — who, like him, were at one time residents, patients — prisoners, essentially — in the Belchertown State School. In a way, his story is their story too.

Vitkus is used to the star treatment. He and Orzechowski have been making the rounds on a book tour. Their April 12 visit to HCC, though, was special, a homecoming.

They met here at HCC 12 years ago at another book signing. Orzechowski, a retired English teacher and writer, was on campus helping Benjamin Ricci, author of the book "Crimes Against Humanity," which chronicles the 1973 class-action lawsuit that ultimately led to the closing of the Belchertown State School in 1992. After the presentation, Vitkus, then a 62-year-old HCC student, introduced himself.

"He said he was a former resident of Belchertown," Orzechowski said, "and he wanted someone to write his life story."

That story begins when Vitkus was an infant and abandoned by his unwed mother during World War II. He lived with a succession of foster families. At 3, he was misdiagnosed as a "moron" with an IQ of 41, and at 6 committed to the Belchertown State School, an institution run the former state Dept. of Mental Retardation (now the Dept. of Developmental Services). He lived there for the next 11 years.

It was also at HCC where Vitkus, encouraged by his classmates and teachers, started to share the details of his life. He began to talk about the abuse and neglect he'd suffered, the beatings, the regimentation, the "Dog House," the residents' term for solitary confinement, the daily indignities, like group showers, and the rows of toilets that lacked dividers and even seats, and the absence of basic household items, such as toothbrushes.

Orzechowski read a passage from the book, recalling Vitkus's early days at HCC and the reaction he received from fellow students:

"Solitary confinement? Bars on the windows? they asked. No toilet paper? No talking allowed? How could this have happened? They had no idea that 'imbecile', 'idiot' and 'moron' were actually clinical terms for the developmentally disabled half a century ago."

Despite the deficit of formal education, Vitkus believed he was smart. Belchertown forced school-age residents to repeat each grade, and they taught the same material both years, so it took him eight years to complete four years of school.

In spite of everything, Vitkus was "paroled" at the age of 17 when administrators finally realized he didn't belong there. In 1964, he joined the U.S. Army. Initially labeled 4-F on account of his prior institutionalization, which would have exempted him from military service, Vitkus lobbied the government for a change in status. He served almost a year in Vietnam.

He subsequently earned his high school diploma in night school, got married, had children, and spent most of his adult life working in factories. He enrolled in college after the factory where he was working shut down.

At HCC, he studied human services. Professor Jackie Griswold, one of his former teachers, said he was one of the hardest working students she's ever had.

"Initially, he was fairly quiet," she recalled, "and I think he didn't believe he was actually in college or would be successful."

His classmates elected him president of the Human Services Club. As such, he gave a presentation about his life at the annual conference of the New England Organization for Human Services.

"Everybody loved him," Griswold said. "He is still very kind and caring. A real champion for people who have any kind of disability."

Graduating from HCC in 2005 with his associate degree in Human Services was one of the highlights of his life.

"HCC was very very good to me," Vitkus said. "Graduating from here, I really surprised myself."

In the book, he recalls the sea of graduates that spring at Commencement:

"Seated among them in a navy blue cap and gown was me, a 62-year-old former retard of Belchertown State School. In the audience were my wife Pat, my son Dave, and his wife Laura and my grandchildren, William and Helena. Like at a previous institution, our names were called alphabetically, so I was near the end of the line. I was used to that. But I wasn't used to thinking of myself as a college student. I, Donald E. Vitkus, was no longer a moron."

Vitkus is 73 now and lives at the Veterans Administration hospital in Florence. He and Orzechowski worked on the book over the course of eight years. The HCC presentation included photographs of Vitkus at Belchertown Orzechowski acquired researching the book. That research also included many field trips with Vitkus back to the grounds of the shuttered institution, whose buildings, though boarded up, mostly still stand.

The book title, said Orzechowski, comes from something Vitkus's last foster family said to him before they left him at Belchertown: "You'll like it here, because you'll be with other people like yourself."

He had siblings, he later learned, but no one visited him there. Ever. Many of the residents had likewise been abandoned, and some died alone, without proper burials. As the story goes, residents didn't die at Belchertown, they just disappeared: "They went to Turkey Hill," a graveyard where they were laid in the earth under a lump of poured concrete marked with a number instead of a name.

Vitkus says he wants to be buried there, alongside those lost souls, "with my brothers and sisters, in honor of them," but that request is not likely to be granted.

A bigger disappointment would be history forgetting what happened inside those walls.

"I think this book will help educate some people," Vitkus said. "I think people will remember it, how we used to treat people, even after they frickin' tear it down."

"You'll Like It Here": Donald Vitkus - Belchertown Patient #3394 is available from Leveller's Press in Amherst.

UPDATE, July 3, 2018: Vitkus died in January at the age of 74. On Sat., June 23, his cremated remains were buried in the Warner-Pine Grove Cemetery on Turkey Hill in Belchertown during a memorial service attended by some 70 family members and friends, including Orzechowski, his biographer.

Click here to read about the memorial service in the Daily Hamphire Gazette ...