'Yes, she was one of our vets and part of our Bunker family." 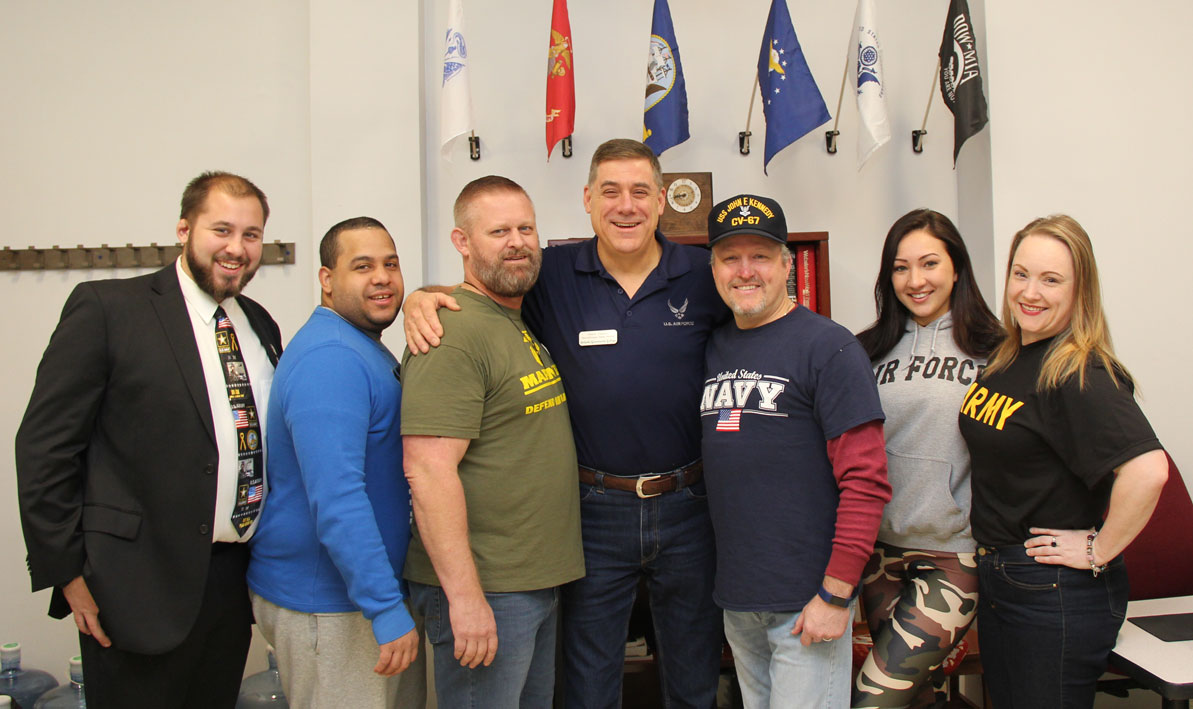 Every time she signed in at the Bunker, Faith Lalchandani drew a smiley face next to her name.

But hers was no ordinary smiley face.

Instead of dots, Faith used hash marks for eyes, and she stuck a cheeky little tongue out of the side of its mouth.

"That was her thing. Her calling card, for lack of a better word," said HCC student Robert Vigneault, the Bunker assistant, also known as the CQ, or charge of quarters. "I can actually go back and look at them now. They kind of stood out."

During the fall 2018 semester, she became a fixture in The Bunker, HCC's veterans resource center. Vigneault remembers the first time she came in. She was wearing a shirt with an Air Force emblem on it.

"I thought, oh, Air Force. With me being Air Force – that's always a story starter for me," he said. "That's when I found out she was over at Barnes, Air National Guard."

Faith made herself at home in the Bunker, settling in frequently to do homework, color a mandala or simply hang out with the other student-veterans and military personnel who use the center.

"She came in with such a bright and energetic spirit," said Vigneault.

One day, she came in holding about 15 pages of handwritten notes, plopped them on the table, flipped open her laptop and then sat there for several hours, typing and periodically pausing to ask a question about proper writing style.

She seemed to fit right in.

"In the military, the camaraderie between people is everything from loving to brotherly or sisterly type stuff, like giving you a friendly punch on the arm," said Vigneault. "It's about making fun of somebody in a kind of light-hearted way and complimenting them in the same respect. Give as good as you get type of thing, and she was like that. She was that open."

In early December, wearing camouflage pants and an Air Force hoodie, Faith enthusiastically posed with her Bunker mates for a photograph that became the poster that now adorns the door to Frost 149. That's her, second from the right, next to Liz Golen, HCC coordinator of Student Activities and the Bunker adviser.

"That was the first day I met Faith," said Golen. "We had a good time taking that picture, then we spent some time hanging out and talking about how involved she was going to be this spring on campus. She seemed to be really looking forward to that. After that day and getting to know her in general down there at the Bunker, it was so much harder to hear that she was gone."

According to her obituary, on January 18, Maneesha-Faith M. Lalchandani, 23, "lost her battle with mental illness and tragically died by a self-inflicted wound." She had killed herself at her home in Holyoke.

There really are no words to describe the kind of shock and sorrow that followed.

"If she would have come in here and hid in the corner and kept to herself, and I've had a couple of people do that, the red flags go up," said Vigneault. "But she came in, she engaged, she talked."

One of nine siblings, Faith – that was how she introduced herself – was a 2014 graduate of Chicopee Comprehensive High School. In addition to being a member of the Air Force, she had worked as a corrections officer in Vermont. Only after her death did her friends at the Bunker learn she had last taken classes at HCC in 2016, though she was enrolled for the Spring 2019 semester as a criminal justice major.

"It turned out she was taking classes through an online school but she came here every day because she had support here, and she knew the Bunker was here," Golen said. "So, yes. She was one of our vets and part of our Bunker family."

On Friday, Feb. 22, Vigneault organized a memorial for Faith in the HCC board conference room so members of the campus community, in particular the campus military community, could pay their respects. He and others wore red shirts in honor of "Red Shirt" Fridays, a national initiative calling to "Remember Everyone Deployed."

Many of the red shirts had the number 22 on their sleeves in recognition of the "22 Too Many" movement, which seeks to call attention to the issue of veteran suicide, 22 being the number of veterans said to take their own lives every day.

"Honestly, one is too many, and I think we all understand that," said Shawn Dominik, a representative from the Worcester-based nonprofit Veterans Inc. and one of the guest speakers. "I think the biggest thing is getting the word out about the services that are available for veterans."

"I didn't know Faith, but it's sad to see a young person leave this earth so soon, knowing how much impact she could have had on people's lives," said Jesus Pereira, the veterans service agent for the city of Holyoke.

"One thing I'd like to tell everyone," he said. "If you're having problems, you're not alone. It may feel like that, but you're not."

On display was the the poster photo taken with Faith in December.

"This sits on the Bunker door," he said. "As you can see, she is in our minds every day."

He passed around a yellow box of brightly colored markers. About a week before the memorial, while tidying up the mandala stand on the main table in the Bunker, Vigneault had noticed some scribble on the outside of the box.

On the box, written in green, slightly smudged ink, it said, "Faith Wrote Here." She had drawn a tiny heart over the "i" and underneath all of it a smiley face, with two hash marks for eyes and a cheeky little tongue sticking out of its mouth.

PHOTOS by CHRIS YURKO: Faith Lalchandani, second from the right, poses for a photo in December with her Bunker mates, including Bunker assistant Robert Vigneault, center, and Liz Golen, coordinator of Student Activities, far right.