"It really excites me and feels like I'm in the right setting. Even though I didn't go to HCC myself, it still means a lot to me because my mom went there." – Maylene Rodriguez Scott, daughter of Jennifer Scott '10, '19 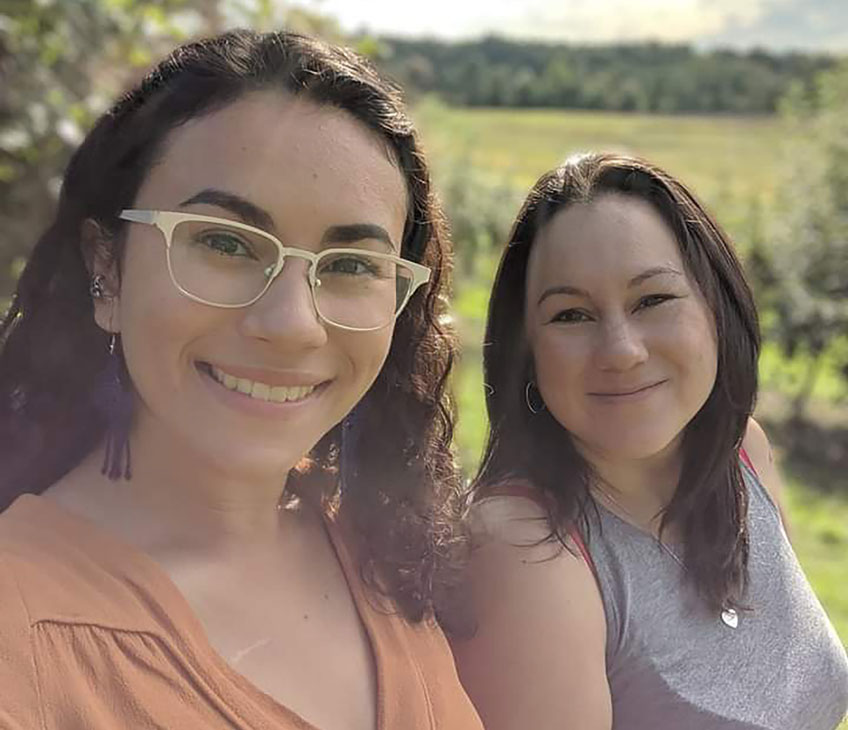 EDITOR'S NOTE: This story also appears in the Fall 2022 issue of The Connection, the HCC college magazine.

When it comes to Jennifer Scott and her daughter, Maylene Rodriguez Scott, it's hard to say who inspires the other more.

After Maylene graduated from Amherst Regional High School in 2015, Jennifer watched her daughter put herself through the University of Massachusetts, where she graduated in 2020 with honors, a bachelor's degree in sociology and educational policy, and minimal debt while working in the university's financial aid office.

Theirs is not only a story of perseverance but one that illustrates the profound power a community college education has to transform individual lives – and families.

Maylene, now 25, was a toddler when her mother entered HCC's Jump Start program. After dropping out of Chicopee High School and leaving a troubled relationship, Scott was getting by on public assistance, but she wanted a job.

Eventually, Scott found Jump Start, a free HCC program created in the mid-1990s that provides specialized job training, job skills preparation, career placement services, and support for disadvantaged people looking to join the workforce. It was perfect for her.

Scott, 42, says the program provided an essential foundation that helped build her confidence. In addition to specific job skills, Jump Start instructors taught her how to prepare resumes and cover letters, how to dress for interviews and communicate with potential employers.

"They never were judgmental and that was a really big thing," she said. "They were teaching you what you needed to know in the real world to be successful. They treated you with kindness and respect. I was never discouraged."

At the time, Scott was on her own and found their gentle support and the connections she made with other students to be just what she needed.

"There wasn't anybody pushing me to do it except the people in the Jump Start program," she said. "I don't think I'd be where I am if I wasn't able to get that foundation. It was really a savior."

The effort paid off. After completing Jump Start's customer service training track, she was offered jobs in banking and medical billing.

"The main goal of the program is to get participants off public assistance by preparing them with immediate, marketable work skills," said Jump Start coordinator Aimee Funk.

But before that can happen, she said, staff individually assess each participant to identify barriers to success – and work with them to make sure their needs are met.

"It's not one facet that makes a student," she said. "It's a circle of things."

See Accompanying Story: Getting a Jump

Although Jump Start is all about putting people into the workforce, the staff there hope participants will return to HCC at some point to continue their educations.

That was the case for Jennifer Scott.

While thrilled to find a job after Jump Start, she eventually returned to HCC, where she began to chip away at her associate degree in human services, working full time, taking two or three classes each semester at night, occasionally taking a semester off, until she had finally earned enough credits to graduate in 2010. Later, Scott returned to HCC again for a certificate in addiction studies.

Maylene has vivid memories of her mother's years at HCC, often tagging along to campus when she was a young student at Wildwood Elementary School in Amherst, where she grew up.

"It was the first time I'd ever seen another school," Maylene said, "and I remember walking through the halls and thinking 'Wow! This is Mom's school. It's so big!"

Over time, she came to understand how hard her mother was working, especially when, for example, Scott would collect Maylene from her after-school program following a day's work, and then head off to a night class.

She remembers, too, the sweet rewards: The day her mother received her graduation tassel, she placed it on her rearview mirror, where it still hangs – a symbol of her achievement.

That is something I can do for myself, Maylene realized.

After Scott earned her associate degree, a YWCA internship working with people leaving relationships marred by domestic violence led to a job in Palmer District Court as an advocate working with victims and survivors. Eventually, she earned a promotion to supervisor, managing advocates in several courts in western Massachusetts.

Two years ago, she got a job as a case specialist in the Eastern Hampshire District Court Probation Department in Belchertown. When Scott saw the job posting, she was intimidated, but her daughter encouraged her to apply, and, in the end, Scott was selected out of a field of 90 applicants.

"She couldn't be prouder of me," Scott said of Maylene.

On occasion, when Scott wonders how she got the job, given that she does not have a bachelor's degree, her daughter sets her straight.

"No, you definitely beat 90 people," Maylene tells her. "Don't downplay it."

After taking a City Year gap program in Boston, Maylene remembers opening her financial aid letter from UMass and finding it so confusing she thought she wouldn't be able to afford to go. Encouraged by one of her mother's friends, she went to the financial aid office for help deciphering the aid package. Turned out, she'd misread it. Not only were her costs covered, she was told she could apply for an additional scholarship for Amherst High graduates.

That experience made her want to better understand college financing, which she got first-hand at a work-study job in the financial aid office, where she worked her entire four years at UMass.

"It made me very passionate about helping people understand their financial aid so they could walk away saying they know what their options are," she said.

"Those were the classes when I thought, 'Wow, learning is really fun,'" she said.

After graduation, she was hired full time in the financial aid office and then worked for a year at Community Action Pioneer Valley, a nonprofit that connects low-income Valley residents with fuel assistance, food benefits and other resources.

Then, in fall 2021, she saw a job opening in the Financial Aid office at HCC, applied and got it.

Maylene began her job as an HCC financial aid counselor in October. She sees it as an opportunity to work for an institution whose mission is accessibility for all. She especially loves that HCC offers programs like Jump Start that meet students wherever they are on the road to education and self-improvement.

"It really excites me and feels like I'm in the right setting," she said. "Even though I didn't go to HCC myself, it still means a lot to me because my mom went there."

Meanwhile, Jennifer Scott loves her job in the court's probation office. She took a semester at Elms College, thinking she might continue on for a bachelor's degree. Though Scott is not so sure, there is someone in her life who is.

"My daughter," she said, "is really adamant that I should."