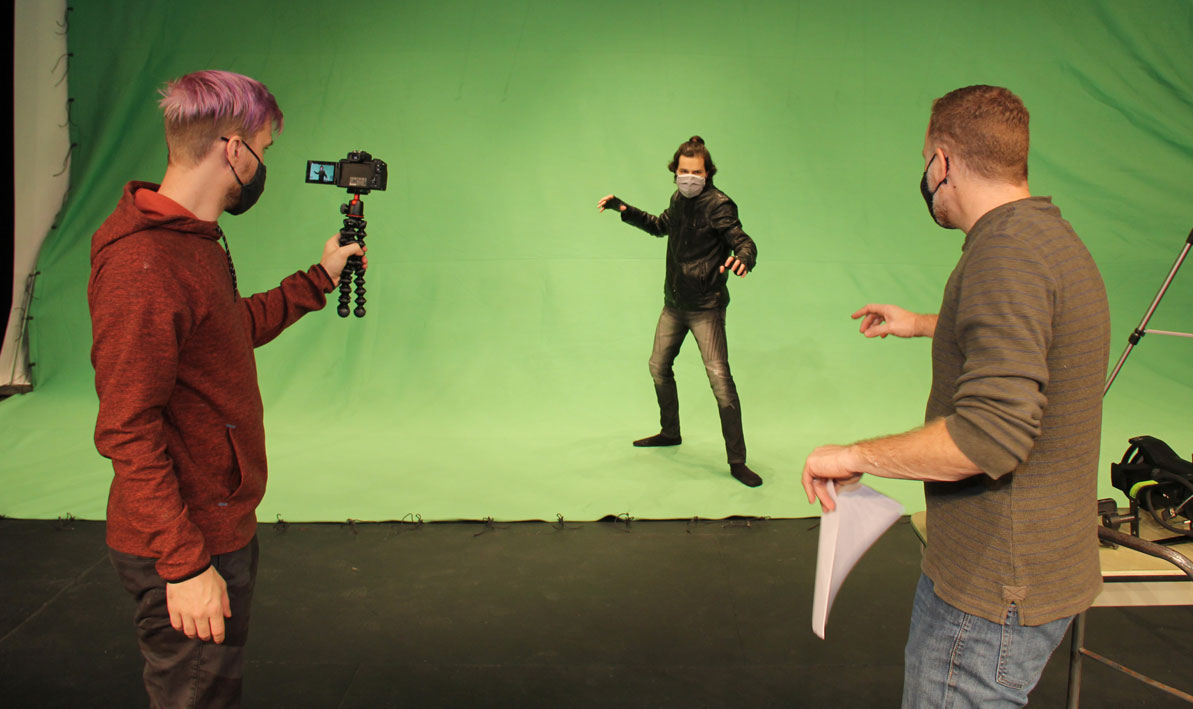 The original work, written by HCC alumnus Tom Roche '16 of Holyoke, was recognized with a merit award for "Innovation in Digital Theater." HCC student Nanette Mendieta of Holyoke won an award for excellence in stage management.

The awards were announced at the end of the KCACTF Region I festival, which was held virtually this year Jan. 25-31.

"Fatal Fisticuffs" was originally conceived as a traditional stage production that was meant also to be streamed over the internet and include real-time interactions with a virtual audience. But the COVID-19 pandemic forced the play off stage and completely into the digital realm.

"We were all trying to overcome the obstacles that were placed in front of us as we attempted to tell a story in a virtual world," said director and HCC theater professor Tim Cochran. "We wanted to experiment and push our technical abilities as far as we could. Being recognized on a regional level is important because it provides affirmation that our work is respected by other colleges and it recognizes our merit as a program of excellence and innovation. This play was being produced at an incredibly difficult time for all of us and it became a light in the darkness for a lot of people."

KCACTF Region I includes colleges and universities in northern New York and all six New England states. Awards are based on the recommendations of respondents, who – usually – travel around the country to view college theater productions and offer critiques.

In the case of "Fatal Fisticuffs," the production was performed live four times over three days in November 2020. During the show, 13 student- and alumni-actors performed in front of green screens in their homes with the live action patched together remotely with fight scenes pre-recorded on the stage of HCC's Leslie Phillips Theater.

Based on their performances in "Fatal Fisticuffs," student-actors Lauren Bailey, Miguel Perez and Brandon Rodriguez were also selected to perform in an acting competition during the festival.

"I think the students' performances speak to their dedication, talent, and commitment," said Kim Hicks, HCC dean of Arts & Humanities. "The same applies to our Theater faculty, who work collaboratively with students to create the fall and spring theater productions each year. Everyone involved in these shows puts in an incredible amount of work, including nights and weekends, and the work is evident in what we see on the stage and, now also, on the screen."

The production featured a number of HCC theater alumni in key positions: Cory Missildine '13, a professional gamer and owner of the Easthampton-based livestreaming company Missildine Online, served as streaming coach; Mike Pray '08, a member of Tieline Theater, a Massachusets theater collaborative, served as fight choreographer; and Roche, an award-winning playwright, wrote – and rewrote – the script.

The characters in Roche's play inhabit a bleak, degraded world where flowers no longer grow. They live alone in boxes, eat artificial food from plastic tubes, and may venture out once a year during an event known as The Opening. The rest of the time, their interactions are  virtual, coming in the form of holograms, online chats and videogames. In the play "Fatal Fisticuffs" is a  Mortal Kombat-style eSports competition that provides both a literal and metaphorical battlefield for the main character, Clayton Day, as portrayed by Miguel Perez.

"Tom worked on the script for a full year before learning that he needed to pivot and adapt the entire story into a virtual platform," said Cochran. "This was an incredibly difficult undertaking but Tom stepped up to the challenge. All told, he wrote more than 20 different versions of the script. His commitment to crafting a script that would hold together and tell a compelling story that was about our current plight is what put everything in motion for us."

In the past nine years, the HCC Theater Department has won 12 KCACTF awards for individual acting, ensemble acting, dedication to a script, stage managing, and best original music, among others.

This spring, the HCC Theater Department will present another virtual production, "In These Times," a dramatic collection of original stories from the HCC community about life during the COVID-19 pandemic. The show, directed by HCC theater professor Pat Sandoval, will be performed online April 14-17.