HCC faculty, staff and students will soon begin brainstorming ideas for the next 'One Campus, One Theme' initiative. 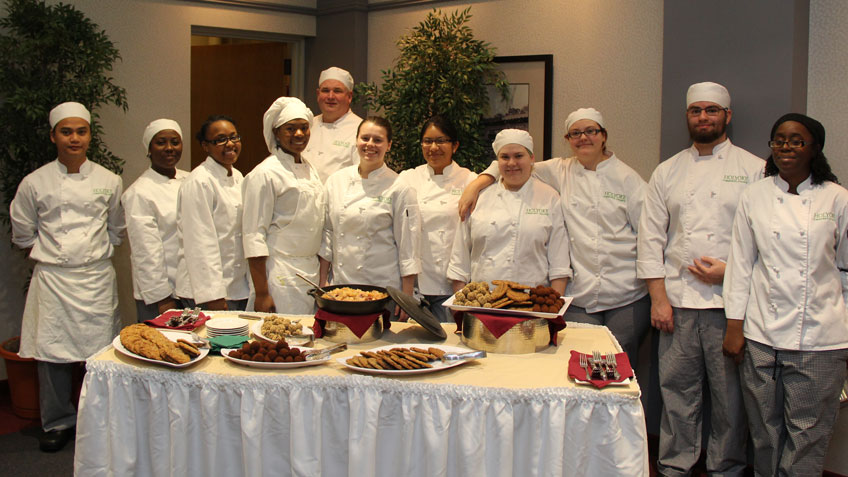 HCC's first 'One Campus, One Theme' initiative ended the same way it started — with the consumption of a delicious meal prepared by students in the college's Culinary Arts program.

That was no coincidence. For the past three semesters, HCC has been focused on food.

Last Thursday, students, faculty and staff gathered in the Picknelly Dining Room to eat and also to mark the end of the extended, campus-wide project that used food as a teaching tool, examining that subject from a variety of academic angles and integrated projects, events and activities.

The "One Campus, One Theme: Food" initiative officially kicked off with a Sustainable Harvest dinner in the Picknelly Dining Room on Sept. 28, 2015, although faculty members had already begin incorporating the food theme into their classes with the start of the Fall 2015 semester. The broad food theme was further broken done into subcategories to allow for the widest possible participation: Food Stories, Food Production, Food Culture, Food Health, Food Science, Food Policy and Food Justice.

By the end of the Fall 2015 semester, more than 40 HCC classes, from English and human services to visual arts and biology, had incorporated the food theme into their curricula in some way.

Many of those projects were described in the Spring 2016 issue of Alumni Connection, which was also dedicated to the Food theme.  The Culinary Arts program, led by chef Warren Leigh, organized a series of special dinners and events, including the Sustainable Harvest dinner (September 2015, a Columbian Exchange dinner and Farmers' Market Festival (both November 2015, Student Showcase (November 2016) and Food Finale (December 2016).

The HCC Library set up special displays of food-related books. The Theater Department's Fall 2015 and Spring 2016 plays (American Hero; and The Whale) both touched on the theme of food.

Student Activities incorporated the food theme into its calendar of events on an almost daily basis, with new recipes in Week @ a Glance, a weekly Farmer's Market and special food trucks. The food theme also inspired at least one new club — beekeeping — after popular honey harvesting and tasting events on campus.

The Visual Arts department held an Empty Bowls fundraiser to raise money for the HCC Food Pantry. Other departments sponsored special films and lectures based on food-related themes. Last Spring, Student Senators organized FOODx, a day of lectures focused on food, and about 70 students participated in a Day of Service where they volunteered to help out community nonprofits that work to feed the poor.

Early in 2017, faculty, staff and students will begin brainstorming ideas for the next "One Campus, One Theme" initiative.