How the HCC Foundation became a philanthropic force 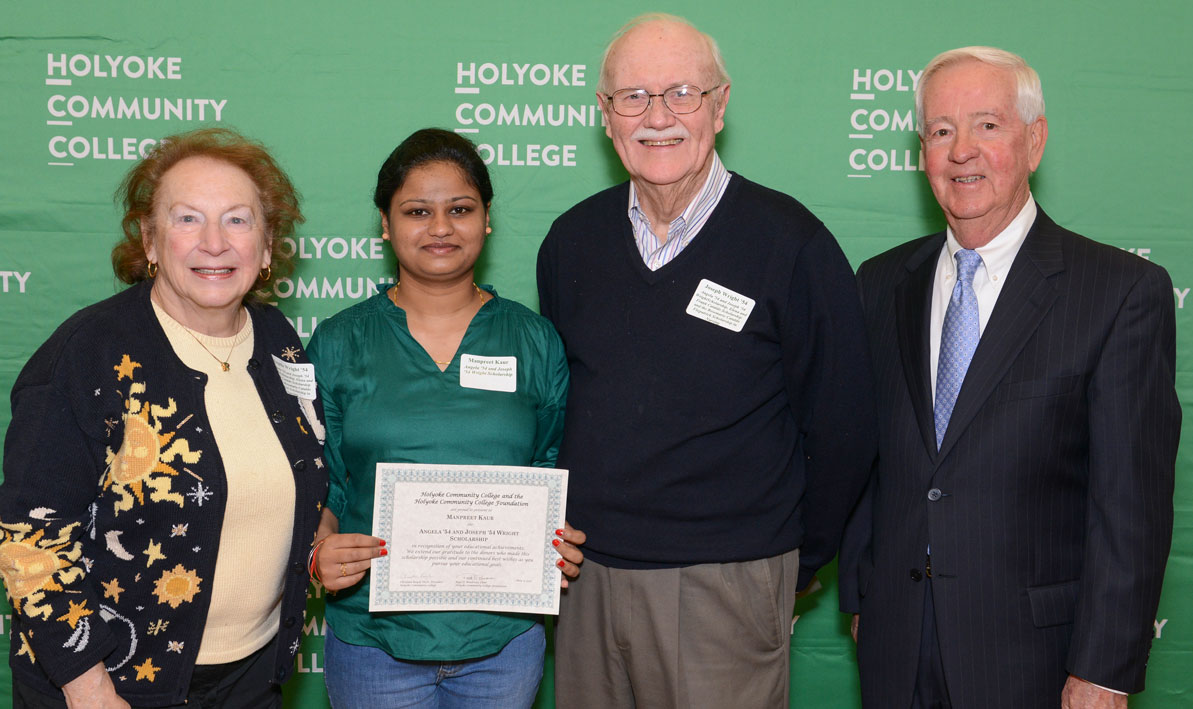 Editor's Note: This story also appears in the Spring 2019 issue of the Alumni Connection.

After completing his military service in 1952, Joseph. Wright wanted to take advantage of the GI Bill. One day, wearing his U.S Army Air Corps uniform, he visited the office of George E. Frost, then the director of Holyoke Junior College.

"I walked in and said, 'I really want to go to college, but I don't know a thing about it,'" Wright recently recalled.

"I can help you with that," Frost replied.

Throughout Wright's two years at Holyoke Junior College – later to become Holyoke Community College – Frost continued to help Wright and the many other students who he mentored over the years. In 1968, though, it was Frost who needed assistance.

The former Holyoke High School building on Sargeant Street where the college had been established burned down on Tuesday, Jan. 4. Frost – and other city leaders – turned to Wright for help launching a corporation that could raise money to rebuild the college on a new campus.

The Friends of Holyoke Community College was incorporated as a nonprofit on Aug. 1, 1968. Charged with fundraising, it was one of the first organizations of its kind in the country affiliated with a community college.

Wright became a founding board member. At 88, he only recently stepped down, having served the organization – now known as the HCC Foundation – for all of its 50 years.

"It's spectacular how the foundation has grown," says Wright, now an emeritus board member. "It's one of the most successful community college foundations anywhere."

The HCC Foundation, like its antecedent, The Friends of Holyoke Community College, exists solely to support students and the mission and programs of HCC.

In its early years, the foundation helped pay for the development of the original two buildings (A and B, now Frost and Donahue) on the new Homestead Avenue campus. Since then, through capital campaigns, public investments and private donations, the foundation has helped support the construction of every other major building project in HCC history, such as The David M. Bartley Center for Athletics & Recreation, the Kittredge Center for Business and Workforce Development, the Picknelly Adult and Family Education Center on Maple Street, the Center for Health Education on Jarvis Avenue, the HCC MGM Culinary Arts Institute on Race Street, and, most recently, the Center for Life Sciences, which opened on the first floor of the Elaine Nicpon Marieb Building for the start of the Fall 2018 semester. Over the years the foundation has provided nearly $2.8 million in student scholarships while also investing in classroom equipment and technology for select academic and student support programs.

"The community is so invested in the foundation and in the college. It's quite impressive," Sbriscia says. "People are passionate about our mission and the work we do, and that translates to life-changing financial support."

A 30-member board now oversees the foundation. David Bartley, an alumnus from the class of 1954 and the college's second president – he took the reins after Frost – is one of the current board members. Many say it was Bartley's passion and innovation that enabled the foundation to thrive.

Elaine Ironfield, who served as the foundation's executive director in the 1980s, explains that after the Homestead Avenue campus opened in February 1974, city leaders considered the work of the Friends corporation complete. The $200 remaining in its coffers was given to the HCC Alumni Association, and the Friends became inactive.

In the early 1980s, Bartley appointed Ironfield, a faculty member at the time, to run the HCC development office. Her charge included a mandate to revive the fundraising corporation.

"We had enough of the original board members in Holyoke who were still available and willing to come together," Ironfield says. "The Alumni Association gave the $200 back."

In 1985, the name of the organization was changed to the Holyoke Community College Foundation, Inc., a 501(c)(3) nonprofit, and the state approved the amendment on July 30, 1985. The board at that time included Wright '54, his classmate Bartley '54, Maurice Ferriter '52, Patrick Bresnahan '57, and the late Alan Taupier '55.

Bartley, now 84, says the foundation was a mechanism through which leaders of HCC could introduce the college to members of the community. His goal was to reach more than alumni.

"We had to find some way, other than just relying on the state, to provide money," he says. "This was a project for the community."

Ironfield says a consultant who helped them get started advised, "You've got to tell your story."

Over the next few years, HCC played host once or twice a week to friends of the college and businesses in the area. They were treated to a breakfast and then offered a tour of the campus.

"People needed to see what we did," Ironfield says. "We'd talk about the college and what was happening there, and we'd take them into the classrooms."

"That was just common sense – to show people what we had," Bartley says. "We needed to show it off."

Bartley often made the point to potential donors that HCC provided a steady stream of transfer students to Mount Holyoke, Smith, Westfield State, and the University of Massachusetts. And he was careful to note that HCC served the region.

"Patiently, he brought different groups in for tours," he says. "The college became better known. It did raise friends and dollars at the same time. It was well thought out by President Bartley and Elaine Ironfield. They worked extremely well together."

Ironfield says the foundation began to really build support in the late 1980s. Individual and corporate gifts began to flow in.

Sbriscia says that through the work of the foundation board, Ironfield and Sbriscia's predecessor, Erica Broman, the foundation saw steady and impressive growth in its endowment, which is now close to double what it was a decade ago.

In 1987, the foundation awarded its first scholarship – the only one that year.

Wright, and his wife, Angela, who met one another while studying at Holyoke Junior College, founded the Angela '54 and Joseph '54 Wright Scholarship, one of the first of the roughly 140 scholarships the foundation manages today. Other early scholarships were established by George Boudreau '66 and his brother Paul '67 – a former chair of the foundation board – Elena and Frank Cataldo, and the late professor emerita Elaine Marieb '80.

"We saw establishing scholarships as our primary mission," says Ironfield, noting that in the past 20 years, Broman, now at Westfield State University, brought huge growth to the foundation, in part as a result of $1 million capital campaign gifts from Yankee Candle founder Michael Kittredge '73 in 2003 and Marieb in 2014.

Kane says the scholarship program was a critical piece of the foundation package as it allowed the college to hold events at which donors had the opportunity to meet grant recipients.

"That really turns on donors," he says. "It's much more powerful than asking for money for desks."

In May 2018, 215 HCC students received financial awards through scholarships established by alumni, board members, businesses and members of the community.

Further evidence of the foundation's impact is visible on donor plaques throughout the HCC Kittredge Center, the Center for Health Education and other HCC buildings.

"This growth has enabled HCC to respond to the needs of our community," says Sbriscia. "Every day, foundation funds inspire our students and help them thrive, whether that's through facilities, equipment, programs or scholarships."

Wright and his wife, Angela, continue to support the original scholarship they created as well as several others. Each spring, they attend the scholarship banquet and meet the students who benefit from their generosity.

"That's a must," he says.   He continues to be impressed by Frost's vision for HCC. In the early days, he notes, Frost recruited professors with PhDs to teach part time. Many were department chairs from premier private colleges, such as Smith and Mount Holyoke.

Wright credits his HCC education for preparing him to transfer to Boston University and launching his career in retail. By the time he retired, he was executive vice president of the New England division of Waldbaum Inc., the supermarket chain.

His loyalty to HCC is unwavering.

"I had a meeting recently with a friend at Boston University, my alma mater," Wright says. "I said to him, 'Don't send me any appeals. My heart belongs to Holyoke Community College."   He adds, "Whenever I get the chance to talk to HCC students, I tell them, 'Never forget the opportunity you got here that laid the foundation for the rest of your life.' George Frost did that for me."

PHOTO: (Above) Joseph Wright '54, center, and his wife Angela '54, left who established one of the first foundation scholarships at HCC, congratulate 2017-2018 scholarship recipient Manpreet Kaur, with HCC Foundation board member Frances Kane '56 at right.