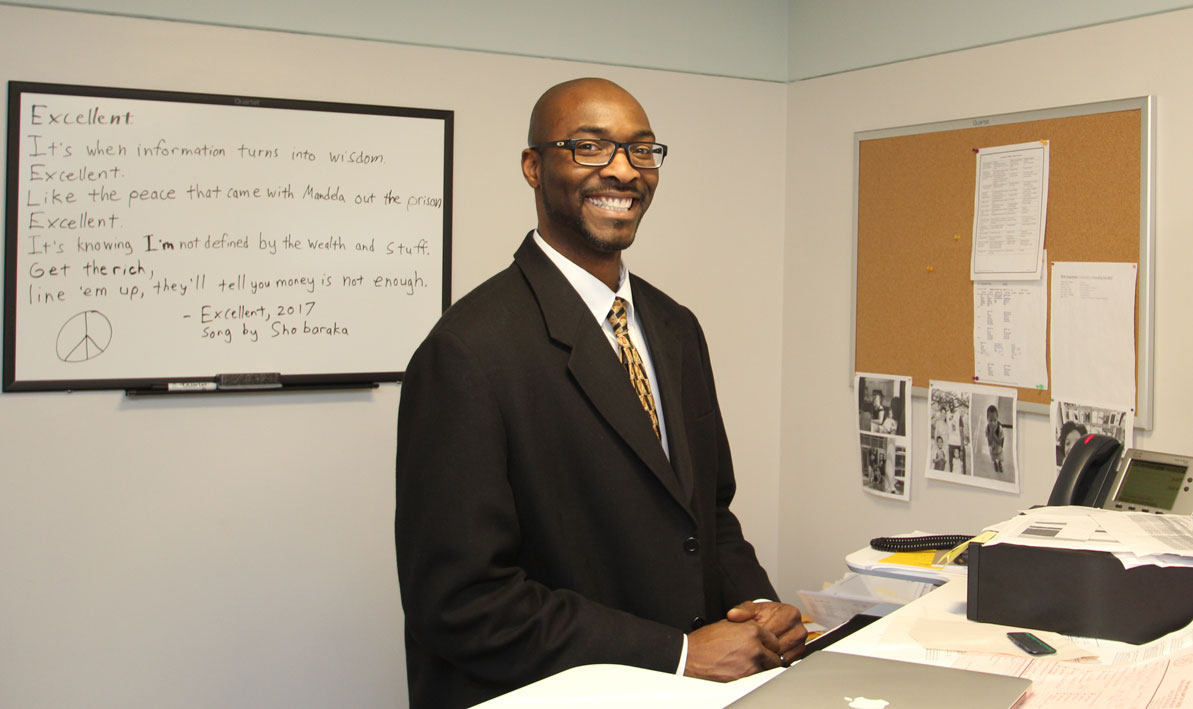 Olugbemiga Adekunle was an associate dean at Blue Ridge Community College in Virginia when inspiration struck him one afternoon in August 2016.

Adekunle had just learned about an online rap challenge, so he ducked into a classroom to record a theatrical and fast-paced video of himself that now lives on his prolific YouTube channel.

Six-foot-five and African-American
Nigerian-American. Everybody's staring and ...
Don't know what to say — pausing to pronounce my name
As a professor, the game done changed
Profess IT? I might be. Computer science? Aight
But I'm blessin' the lesson, confessin', I'm guessin', and stressin' the life of Christ
And no I ain't no expert on every subject matter
I use to wish my dunk would make a backboard shatter ...

This is Gbemiga (pronounced "Beng-gah") Adekunle, Holyoke Community College's new dean of Science, Engineering and Mathematics. He holds advanced degrees in computer engineering, has been a computer science professor, and is a three-time faculty fellow at the NASA Glenn Research Center in Cleveland, Ohio.

"I see people as well-rounded. I want people to see me that way too," he says, noting that even though he is tall, of Nigerian descent, an athlete, and an educator, he is not just a basketball player or just a scholar. "I'm not in a box."

Adekunle arrived at HCC this fall, after spending the summer at the NASA Glen Research Center for the third time, gaining experience in the field of systems engineering. Previously, he served for six years at Blue Ridge Community College as a professor and, more recently, as associate dean for the science, technology, engineering, math, and English departments. He now lives in Holyoke with his wife, Martha, and his five- and three-year-old children.

At 37, Adekunle is roughly the same age his parents were when they moved to the United States from Nigeria in the 1970s.

"They wanted career opportunities," he says, noting his father is a retired nurse and his mother is a nursing assistant. He was raised in Tennessee and Maryland, where his parents still live.

"All of his experiences will serve him well in this position and support his work on behalf of the division," Monica Perez, vice president of Academic Affairs, said when she introduced "Gbemiga," which he prefers to be called,  to colleagues at the beginning of the semester.

Adekunle says he is excited to have a new challenge and the chance to put his administrative experience into action at HCC.

"The focus of my work is making sure that students are successful," he says. "I also will aim to ensure that faculty are supported and get appropriate training to help them advance their careers."

In addition to collaborating with Perez and department chairs, Adekunle hopes to help the college build community partnerships that can serve as resources for students interested in internships.

With his interest in rap as well as comedy and improv, Adekunle is sure to connect easily with students. A look at his YouTube channel tells you this. There you can watch him propose to his wife and take part in multiple skits with faculty and staff at Blue Ridge Community College; his videos also offer a glimpse into his interests in Star Wars, religion and fun.

"A big part of my interest in comedy is this mantra of ‘Yes ... and ...,'" he says. "It's about agreeing and adding to the conversation. That helps to not shut things down. It helps for any organization."

PHOTOS by CHRIS YURKO: Olugbemiga "Gbemiga" Adekunle in his office at Holyoke Community College, where he is the new dean of Science, Engineering and Mathematics.