'I'm thinking about my future' 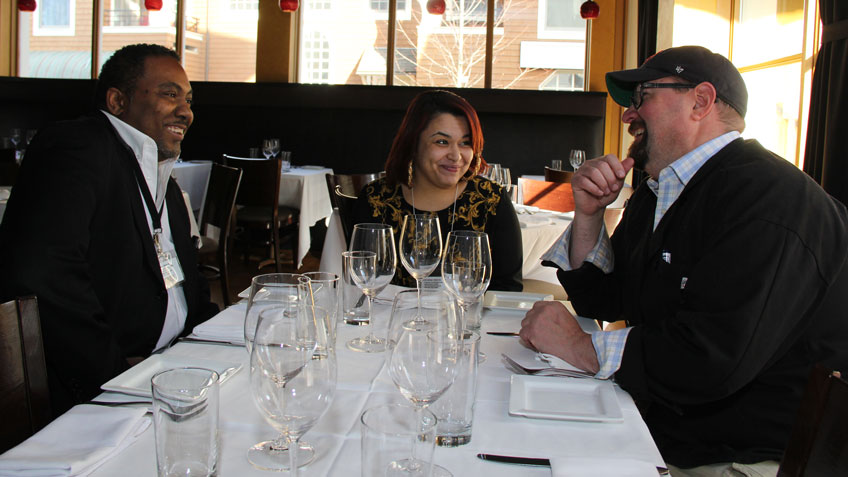 She used to drive the big machines. The fork lifts with the high reach. For two years, she did that, moving heavy pallets around an auto supply warehouse in Enfield.

"I was employed with them from day one that they started," said Noelia Burgos, a 32-year-old Springfield resident and mother of two. "I became a trainer, a team leader and equipment operator, and I kept going. One day they just sent me home."

She started collecting unemployment. She wanted a job. She found her way to Future Works Career Center in Springfield. There she learned about a new noncredit program Holyoke Community College is running to train people like her (unemployed or underemployed) to work in the culinary and hospitality industry.

The program is free, funded by a $190,000 grant from the Workforce Competitive Trust Fund. The fund is administered for the state Executive Office of Labor and Workforce Development by the Commonwealth Corporation, a quasi-public state agency that fosters partnerships between industry, education and workforce organizations.

Participants must commit to attend classes every day, Monday through Friday, from 9 a.m. to 2 p.m., for nine weeks. The course introduces them to a wide variety of career opportunities in culinary and hospitality, from serving and waiting tables to hosting and working as line cooks. They are also introduced to jobs in hotel operations.

"So it's a hands-on opportunity to try out a lot of things and find out what their interests and aptitudes are," said Kermit Dunkelberg, HCC's assistant vice president of Adult Basic Education and Workforce Development.

Students graduate from the program with four key credentials to make them more employable: ServSafe and OSHA-10 certificates, which show they have been trained in safe food handling and workplace safety; a TIPS certificate, which allows them to serve alcohol; and a National Career Readiness certificate, which demonstrates they possess fundamental workplace skills.

"Another key part is that when the program ends they have to let us help them find a job," Dunkelberg said.

That sounded good to Burgos, who finished high school late after having her first son at 16. She attended college for a year but never finished her degree, "because of working needs," she said.

"It's time to have a career," she said, "something that is going to leave me steady and able to provide for my kids."

She began training in October with the program's first cohort. Most of the classes met in the culinary arts kitchen at Dean Technical High School in Holyoke, where Burgos and her 12 classmates learned knife skills and other fundamentals of cooking, food preparation and service.

Last week, though, classes were held at Food 101 Bar & Bistro on the Village Commons in South Hadley. While the restaurant was closed for the morning, students were sitting at the bar. The owner and head chef Alan Anischik, the program's main instructor, was standing behind it, giving a lesson on restaurant etiquette.

"Service is bringing someone a drink," Anischik said. "Hospitality is the feeling customers get when you bring them that drink or the feeling they get when they walk into your place."

Earlier in the course, the students attended a job seminar with representatives from MGM Resorts to learn about future opportunities at the casino now under construction in Springfield. Last Tuesday, students had speed interviews with local employers from the restaurant and hotel industry.

Already, Burgos has leveraged her new skills into a job. For the past four weeks she has been working part time, 5-8 p.m., waiting tables in the dining room at the Glen Meadow Retirement Community, an assisted living facility in Longmeadow.

She's excited about the prospect of working at the new MGM casino after it opens in 2018. She understands the position she and her classmates are in, given that most of them will be starting new careers at an older age. She said she's grateful for the opportunity the HCC program has provided.

"Most of these people were the same way," she said of her classmates. "They were unemployed, they got laid off, or they got terminated. There's a big challenge for us out there. You have to find some way to survive."

Burgos and her classmates will celebrate the completion of the program Thursday, with a noontime meal they will prepare and serve for family members and friends at Food 101.