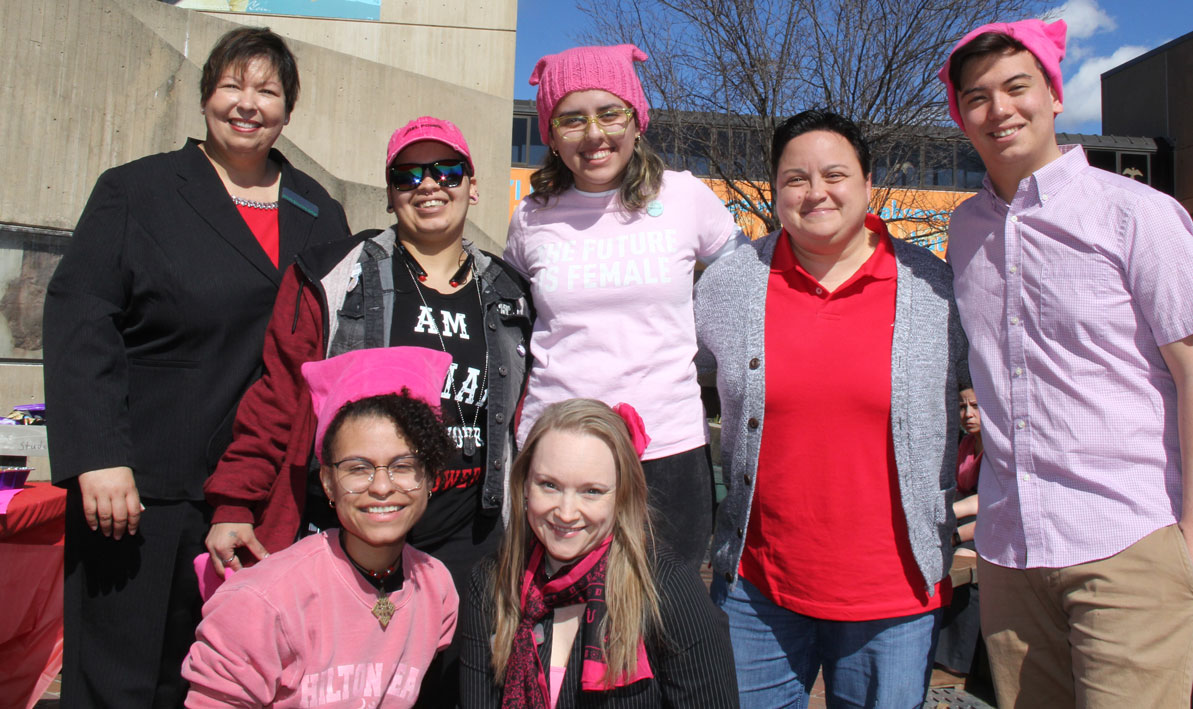 Holyoke Community College celebrated International Women's Day today with a rally in the campus Courtyard that featured speeches by more than a dozen HCC students, faculty and staff - both male and female.

The speakers took turns at the mic, sharing original poetry, giving shout-outs to the strong women in their lives, and offering encouragement and inspiration to all in their quest for equal rights and struggle for a better world.

More than 100 people attended the rally.

HCC president Christina Royal gave the keynote speech, which is printed here in its entirety:

Hello everyone and welcome! I'm delighted to be here as we recognize International Women's Day and the efforts and accomplishments of all those who work for equal rights for women and a better world for all people.

It is an honor to stand before you as the first female president of Holyoke Community College. This is indeed historic, as this college has been led by only three men in its 70-year history. Why does this matter?

Nationally, more than half of the students in college are women, yet only about 26 percent of the college presidencies are held by women.

Boys grow up knowing they can be anything they want to, because they have role models in most job roles across the nation.

While we have made great progress in breaking through glass ceilings, girls are growing up knowing there are some job roles we have yet to achieve.

To the women here today: The fact that you are standing here, on a college campus, with the right to get an education, the right to vote, the right to self-determination-these are freedoms won through long struggle and personal sacrifice by those who came before us.

Women such as: Elizabeth Blackwell, the first woman to receive a medical degree in the United States.

Margaret Higgins Sanger, an American activist, who opened the first birth control clinic in the United States, which eventually led to the creation of Planned Parenthood.

Barbara Gittings, a founder of the LGBT movement and lesbian activist, who waged a successful campaign to have the American Psychiatric Institute declassify homosexuality as a mental disorder.

Disability activist Johnnie Lacy, a leader in the independent living movement who fought for the rights of people with disabilities, especially people of color.

And, Mae Jemison, an American engineer and NASA astronaut, who in 1992 became the first African-American woman in space aboard the Space Shuttle Endeavour. Mae is depicted just over there, on the banner on the side of the Marieb building.

I was born the year Title IX was enacted and there was a lot of advocacy and advancement of women's rights that would eventually take hold. But in my lifetime, there have been more messages about what I couldn't be or do, than what was possible.

When I entered the workforce, I was told not to put the picture of my girlfriend on my desk. "Don't promote your ‘alternative lifestyle' if you want to get promoted. And, I was told to not to "be so assertive" as it wasn't becoming of a woman.

Fortunately, I rejected those notions and kept persevering. And now I stand before you not simply as a woman, but as a first generation college student, a woman who is bi-racial, a woman who is a lesbian, and a woman who just became the first female president of this college.

We have achieved a great deal in the U.S; however internationally, there are still rights and privileges, such as a college education, that are out of reach for girls and women in other countries.

And even here in the United States, there is much still to be done:

To illustrate this, Equal Pay Day is Tuesday, April 4th. This date symbolizes how far into the year 2017 women must work to earn what men earned in the previous year. So the wages that many women are earning today and this week - still don't match what men earned in 2016.

The situation is not much better when it comes to leadership at the state levels:

Women account for just one quarter of executive leadership positions(such as governors and lieutenant governors) in our states.

Just 20 percent of mayors in cities with populations greater than 30,000 are women.

Nationwide, state legislators are not quite 25 percent female. Even in our blue state of Massachusetts, the percentage of women in the Legislature is just about 25 percent of women.

When we look at women in the world of business, some inroads have been made, but change is still happening at a very slow pace.

Worldwide, under a quarter (24 percent) of senior positions in business were held by women in 2016-an increase of only 3 percent from 2011. In 2016, the percentage of women leading Fortune 500 companies dropped to 4 percent.

In education, at least in the United States, when it comes to earning degrees, women are outpacing men. Indeed, we see this at HCC, where 60 percent of our students are women. In the health professions and biological and biomedical sciences, women now account for a greater percentage of bachelor's and master's degrees and Ph.Ds.

However, it is important to note that the success of girls and women does not come at the expense of boys and men.

This is good news indeed, but when we narrow the aperture to our region, we see challenges to be met and work still to be done. Not just in the area of gender equality, but in the realm of economic equality and opportunity for all citizens. Springfield and Holyoke still struggle with high rates of unemployment and poverty.

As an open access educational institution, Holyoke Community College has a unique responsibility to provide opportunities for those who need them most, right here in our local community. The fight for women's rights is just one part of the larger struggle to create a world in which all are valued, all are secure, all are educated, and all can achieve their full human potential.

I call on all of us to learn and reflect on our history, embrace it, celebrate our progress, and continue advocating for equity, not just on behalf of women, but all people. We need everyone to transform our world into a place where all can live in equality, dignity and peace.

Thank you for being here. Rather than show everyone what a day without women looks like, I'd rather remind the world every day, what it looks like to have girls and women in our society, valued equally, for the gifts and talents we bring, not regardless but inclusive of our racial identities, ethnicities, sexual orientations, gender identities, gender expressions, our religions or lack thereof, our immigration statuses, our age, and our abilities and disabilities.

We represent half of this world - half of our entire planet - and we need to continue advocating for equity and inclusion. Because when this is achieved, we won't just have a day like today ... we will have everyday.