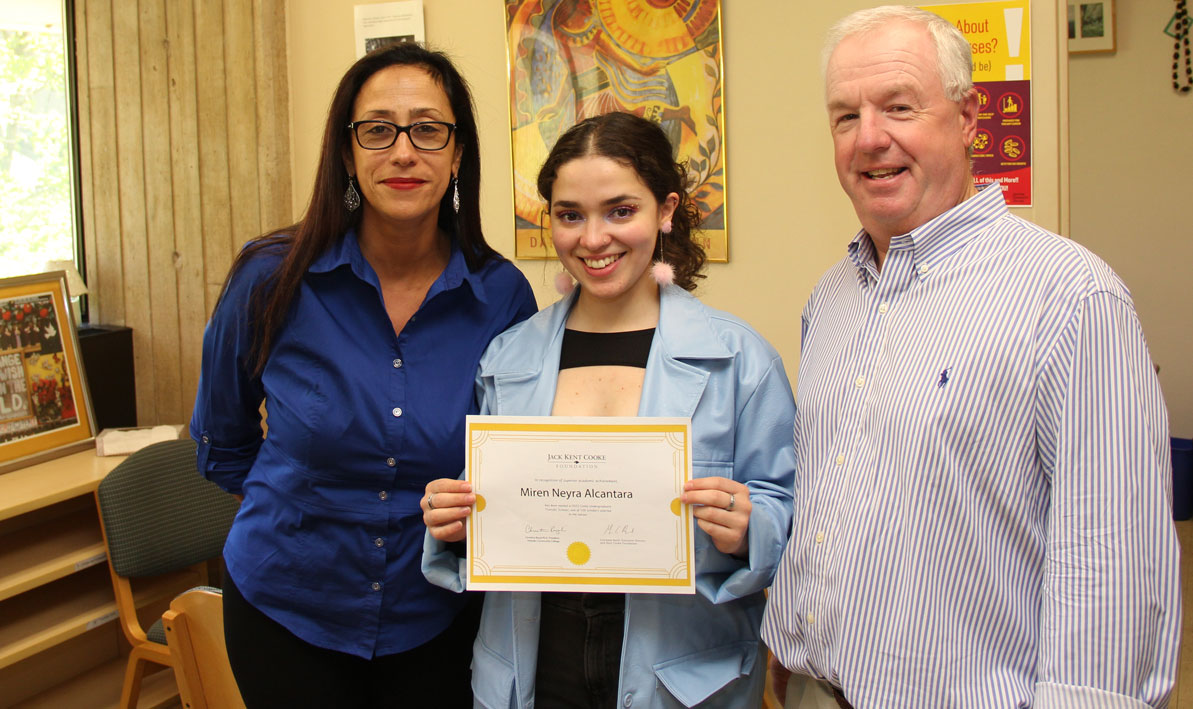 As a student at Holyoke Community College, Miren Neyra Alcántara has already amassed more honors, awards, and accolades for her academic achievements, campus leadership, and community engagement than most post-grads working on their PhDs.

The recognitions have only picked up momentum as the 24-year-old Latinx Studies major careers toward Commencement on June 4, when she will graduate as a valedictorian with the class of 2022.

While fielding acceptance letters to some of the top private colleges in the U.S., including Smith, Mount Holyoke, Williams, Pomona, and Princeton – so far – Alcántara learned she will represent HCC next month as one of the state Dept. of Higher Education's "29 Who Shine," an annual award presented to one graduating student from each of the 29 public colleges and universities in Massachusetts.

"It feels unreal. I can't believe it," said Alcántara, an international student from Mexico who now lives in Northampton. "It's been such a long process, such a hard process."

She is the sixth HCC student to receive the Jack Kent Cooke Transfer Scholarship since 2008.

"This is a very prestigious recognition from a national organization known to award large scholarships to exceptional, talented community college students who demonstrate high academic achievement and financial need," said Irma Medina, coordinator of HCC's Pathways program and Alcántara's transfer adviser. "The process is more competitive than most of the schools they apply to. I'm absolutely in awe of this young lady and her personal journey."

That journey began in Mexico City, where Alcántara grew up. After her parents divorced, she was forced out of middle school because of an unpaid bill. She could not attend high school because her academic records were withheld. Instead, she taught herself and at 17 earned the Mexican equivalent of a GED. For the next few years, she worked, crocheting and sewing cat and dog beds and reusable produce bags that she sold to raise money to attend college in the United States.

Initially accepted to Emerson College, she soon realized she could not afford private school costs without taking out huge loans. In Boston, by chance, she met an HCC Admissions counselor who deals with international students.

"It was so easy to get started at HCC," Alcántara said. "The amount of support I've received has been incredible. I've loved my time at HCC."

Since arriving at HCC in the fall of 2019, Alcántara has maintained a perfect GPA of 4.0, along the way earning academic awards for Honors, Spanish, Latinx Studies, Service Learning, Citizenship, Outstanding Character and Service to Others, and more, as well as multiple scholarships from the HCC Foundation. In 2020, she won the HCC Library's annual BUILD research competition for an academic paper about immigrant women farmworkers. In 2021, she was named to the Phi Theta Kappa Honor Society's All-Massachusetts Academic Team, was a finalist for Business West magazine's Young Woman of Impact Award, and received a year-long Newman Civic Fellowship from Campus Compact for community engagement.

Outside the classroom, Alcántara distinguished herself as president of HCC's Latinx Empowerment Association (the HCC LEA Club) and co-founder and president of the Mujeres and Non-Binary Student Alliance, which focuses on issues such as menstrual equity and reproductive rights. She is a research volunteer at the Women of Color Healthy Equity Collective, an advocacy group for mothers of color in Springfield; a volunteer with the Planting Literacy Program, where she teaches Spanish and English to migrant farmworkers; and an organizer in training with the Pioneer Valley Workers Center in Northampton, which advocates for workers rights. She also works a peer tutor in the HCC Writing Center.

"I think that I'm able to do so much because I'm able to find the connections in everything," she said. "I think my studies and my academics are strengthened by the community work that I do."

Wherever she goes for her bachelor's degree, Alcántara plans to double major in Latinx Studies and Women and Gender Studies, and follow that with a master's degree in immigrant advocacy. Ultimately, she wants to be a college professor while remaining engaged in social justice work and community advocacy.

"I don't think I would be able to do any job if I lost that component," she said. "I may be international. I was not born here. I didn't grow up here, but I'm part of this community, so I play an active part in it."