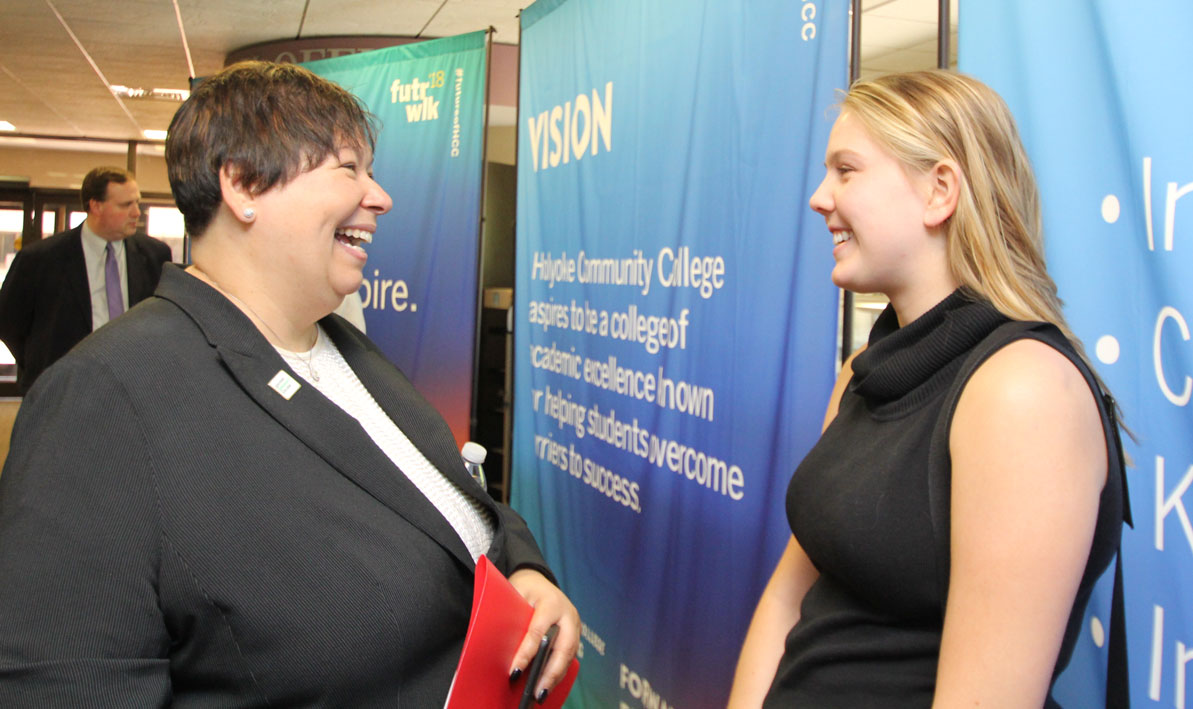 You know the deal. The closet is crammed with coats and jackets you haven't worn for years, if not decades. You have drawers filled with things you've forgotten you had.

Time to make a trip to Goodwill (or your favorite charity shop) in hopes your castoffs can find new life with someone else.

Holyoke Community College president Christina Royal found herself doing plenty of decluttering over the past year.

"As I was donating stuff to Goodwill and other places, I'd be passing several homeless people on the street," Royal recalls. "I began thinking there are probably things I could donate to a homeless shelter."

Her "stuff," like an old blanket, for instance, might be truly invaluable to someone else, Royal says.

And, then came a "really cool moment" during the past academic year when a faculty member saw a student wearing a jacket which looked very familiar. It turned out the jacket had been among donations the professor made to the college's Career Closet from her late father's clothing. (The Career Closet provides business attire for students who need professional clothes for job interviews and meetings.)

"Yes, we know these things happen, but I witnessed the moment," Royal says. "The student was so touched, hearing the story of how this jacket came to be for him, and the faculty member felt good about passing things along for her father who had passed away."

The randomness of it all was not lost on Royal. Nor the impact of a simple act of kindness that connected two individuals in a meaningful way.

Fast forward to last weekend. As her 47th birthday approached Royal started to think about ways in which family and friends might consider alternatives to gifts.

"While there are many, many, very valid and needy charitable organizations, including the Holyoke Community College Foundation, I thought maybe I would try to do something a little different, not focused on contributing dollars," she says. "What if we start generating goodwill, I thought. So many people are feeling disenfranchised by things happening in world. Our world is in such a state of transition. It just seems kindness starts locally. We could start our own little ripple effect. And, in addition to helping someone else, it makes you feel good."

Enter #4700actsofkindness. For the non-techies among us, that's a hashtag which can be attached to posts on social media, like Twitter and Facebook, to connect people who, for instance, participate in a cause or want to comment on a topic among a group of people with shared concerns.

The Twitter version of Royal's request read: "For my 47th birthday, I ask that you join me in collectively engaging in 4700 random acts of kindness. Imagine the energetic shift of consciousness that can occur with this much kindness. Our world needs it. Are you in? Let's use hashtag #4700actsofkindness."

Royal believes strongly in the exponential power of what she's trying to accomplish. As part of its most recent strategic planning process, she notes, the college established a set of values that include kindness, inclusion, trust, innovation and collaboration.

For her, she says, "kindness (is) one of the most powerful ones." As she began talking about her birthday idea with friends, she realized 47 is a small number and, at the same time, 4,700 "sounds like a lot."

But, as she factored it with the number of her friends on Facebook, Royal figured that if each friend engaged in 6.4 random acts of kindness, the goal would be easily met. She determined, "Let's try this and see what happens when we commit to really simple things. I believe in power of that energetic shift (that) when you do one random act, it has an amazing impact on you and the other person."

The response on social media is very positive. Within 24 hours, one of her Facebook friends elaborated on four acts she'd accomplished, including paying for the next car in line at a Dairy Queen because all the children were crying and the parent cautioned they only had enough money to pay for food, so there would be no Blizzards for the kids. Royal says the acts of kindness need not involve money and can be very simple indeed.

She cites the kindness shown her by another faculty member who dropped into her office one day to thank her for her leadership.

"It was one kind word, and it left me smiling for the entire day," Royal says. "We might just get people to focus on something positive."

In both her personal and professional lives, Royal uses social media, understanding all the while about its negative uses that accompany the positive. "I think Twitter brings out the complexity of a democracy," she says. "I think it's a great tool to allow a lot of voices to be heard. On the flipside, sometimes people forget there are other people behind the comments they are directing things to. Would they say the things they tweet if they were face-to-face with each other?"

The Twitter "wars" that often break out, whether among politicians, entertainers or others, are a reminder, adds Royal, of some of the fundamental things taught in education – civility, respect, how to communicate face-to-face.

"It's all the basis of our society, and (social media) can be used for better or for worse." "Sometimes, it can be discouraging when there are a ton of voices, all weighing in on things, and a lot of stuff being highlighted is not very positive," Royal says. "But there are positive things happening in our world. If we choose to focus on those, we might attract more of that."

"I also want us to collectively harness our powers to be exponentially positive," she adds. "The collective effect of millions of people doing those (positive) things creates a civil society. It starts locally, and what happens locally right in our backyard affects us more than anything else."

Cynthia G. Simison is assistant to the publisher and managing editor of The Republican. She may be reached by email to csimison@repub.com.