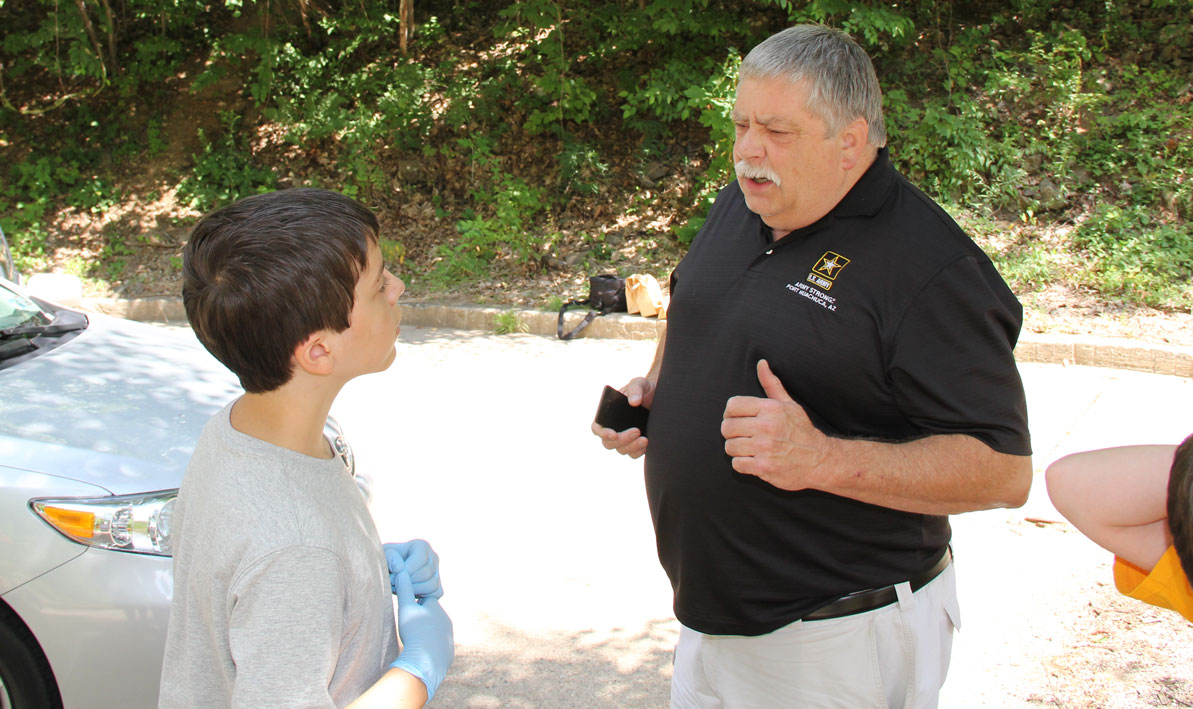 When Louis Barry met Selina Ortega in 2015, the HCC student was enrolled in his summer course as well as two others in the Criminal Justice Department. At the same time, she was working a part-time job, serving in the U.S. Air Force Reserves, and attending a local police reserves academy.

As Holyoke Community College's interim public safety director, Barry knew Selina had applied to be a full-time campus police officer and was a stellar candidate, but a computer glitch had inadvertently knocked her out of the candidates' pool. So, he did what comes naturally to him; he helped her.

"He gently pushes students in the right direction," said Perez. "He empowers them by teaching them how to navigate the system and advocate for themselves. He sees their promise."

Barry brushes off the praise. "It was no big deal really," he said. "I enjoy getting students off to a good start."

That dedication to students is one reason why Barry, a graduate of HCC's Class of 1973 and an adjunct professor of Criminal Justice at HCC, was selected for a Distinguished Service Award for Commencement 2017.

Barry, 63, served for 23 years as police chief in Granby, where he also recently completed two three-year terms on the Board of Selectmen. He's an instructor at the Western Massachusetts Criminal Justice Training Academy - and two others in the region - and works with a forensic psychologist as a private investigator of cold cases.

Enriching the lives of young people - from college age to schoolchildren - is a focus of Barry's energy. He is the founder and coordinator of HCC's popular Criminal Justice Academy, a summer youth program that gives area teens a taste of law enforcement and crime scene investigation.

On campus, Barry is the longest-standing member of HCC's Criminal Justice adjunct faculty in CJ, teaching since 1990, and in the fall of 2015, he stepped forward to assume the role of interim director of Public Safety.

"This work at HCC is payback for getting my career going," Barry said, during an interview last month, noting he wouldn't have transitioned well from high school to a four-year college. "If HCC didn't get me started, I have no idea what I would have wound up doing."

Barry grew up in Norwood, spending his summers on Cape Cod, until he was in junior high school and moved to Agawam. He graduated from Agawam High School and briefly considered attending a Boston-area college before enrolling at HCC in the Criminal Justice program that was newly formed by George Gaudette.

His career goal at the time was to be a park ranger, and Criminal Justice most closely fit the bill. After graduating from HCC in 1973, he enrolled at Castleton State College in Vermont, where he eventually earned a bachelor's degree in Criminal Justice. After his first two semesters, he got a job as a summer special officer on the Cape.

On Barry's first shift, at 7:30 a.m., as he was about to launch his training with a senior officer, the two stumbled on a house break-in in progress. Half an hour later, Barry had three felony arrests under his brand new police belt.

"That really turned me on to the job," he said.

Barry worked as a patrolman, a detective, and then as sergeant on the Cape, and also earned a master's degree in Criminal Justice at Anna Maria College. After both of his sons were born, he and his wife, Dianne, moved back to this area to be closer to family.

The Barrys' sons both graduated from West Point and are in the U.S. Army. Nicholas, the older son, is a major stationed at West Point, where he teaches engineering; Matthew is a captain and a lawyer assigned to the Judge Advocate Generals Office.

While serving as a police sergeant on the Cape, Barry trained summer officers and enjoyed the interactions. He mentioned to Gaudette that he'd love to try teaching a course, and in the spring of 1990, he taught a human relations class and then came on board in the Criminal Justice Department in the fall, and he has been there ever since.

"I really enjoy it," Barry said. "I see myself, sitting in the chair 27 years ago. It's a good feeling to be able to get these students jump-started in a career."

Since Barry retired as Granby chief, he has also been teaching at Western New England University and Cambridge College, and at three area police academies. "I keep busy," he says.

This year, he will run two summer youth programs on campus in August, and he's deep into a 14-year-old homicide case in Vermont, for which he partners with a professor who has a forensic psychology background.

"I have no intention of slowing down at this point," he said. "I don't know what I'd do all day."