Investment of equipment and energy boosts signal and spirits at 103.5 WCCH 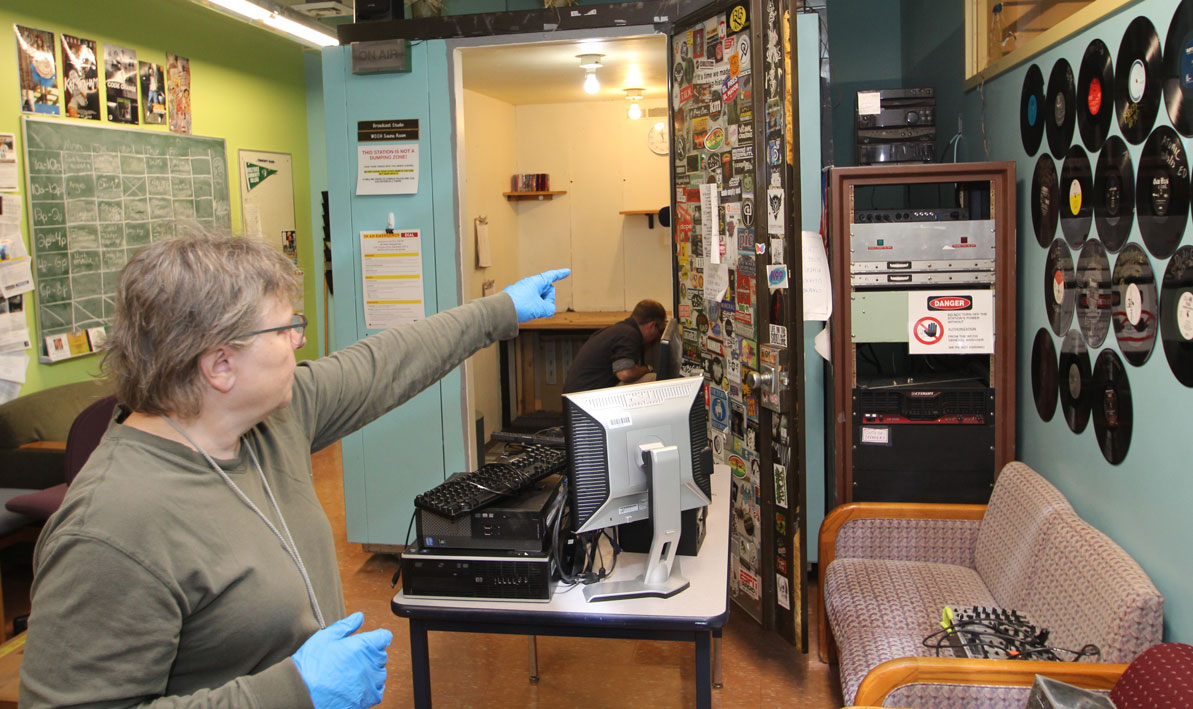 In radio, dead air is the enemy. Silence a sin.

If listeners can't find what they're looking for, they'll keep spinning the radio dial.

In recent years, maintaining that signal had become increasingly difficult, mainly due to old and outdated equipment prone to failure.

At times, said Betsy Cortis '17, WCCH's music and program director, "We've been completely out of order."

That was before Tuesday, Nov. 14. On that day, the station went intentionally dark, that is, silent, for hours as a new soundboard was installed by Scott McPherson, executive director of Holyoke Media, who volunteered his time.

The old console was about 25 years old, said Converse. The microphone and headphone channels had died, leaving DJs to patch together technological Band-Aids using consumer-grade equipment brought in from home.

The installation of the soundboard represents a renewed investment in the station on the part of the college. Over the summer, the station also received a new audio limiter, a piece of equipment that compresses the broadcast signal to reduce distortion.

The limiter was likely the original from the station's founding 40 years ago and wasn't working, leading to a weak and distorted signal.

"I remember the first day I started, I saw the needles weren't moving," said Converse, who is now in her third semester as adviser for the station. "There was no volume going out. It was very poor quality. The only way to prevent distortion was to turn the volume way down, but it was so low, you could pass right by."

She said the new equipment was well worth the total investment of $7,000.

"It's beautiful, so nice and clear," Converse said. "It sounds like every other radio station now, in terms of volume and clarity. The students are really excited."

That is evident by the increased level of interest in the station and the HCC Radio Club, which Converse also advises. The number of student DJs had dropped to a low of five before the start of the semester. There are now 23, Converse said.

"We were losing DJs," she said, "because no one wants to spend their time on something that's not going anywhere."

Converse has a lot of ideas about what she'd like to do at the station. Live musical performances. Radio dramas. Public affairs programs. Mainly getting more professors and students involved, as well as the larger Holyoke community.

Before coming to HCC, Converse had worked for nine years at Free Press in Florence, a nonprofit advocacy group that does a lot of work with low-power FM stations and community television.

She will teach Introduction to Radio Broadcasting at HCC in the spring and has ideas about that too, like expanding the traditional course to include podcasting and streaming. She'd also like to introduce a kind of lab component where students rotate through the different jobs at a real radio station.

This semester, students in the club have been conducting fundraisers to raise money to buy a new FM tuner, a device that ensures the station broadcasts at the correct frequency, and a new emergency alert system, which is required by the FCC.

"There's a lot we can do but we can't do it without the equipment," she said.

Radio bandwidth is finite, she says, and stations can lose their frequency if is not properly maintained.