There will be no Covid testing at HCC on Saturday, January 29 due to the forecasted snowstorm.   Important Covid-19 vaccination policy update

The 25-year-old Florence resident, now at Hampshire College, won the presitigious Glascock Poetry Prize in 2020 as a student at HCC 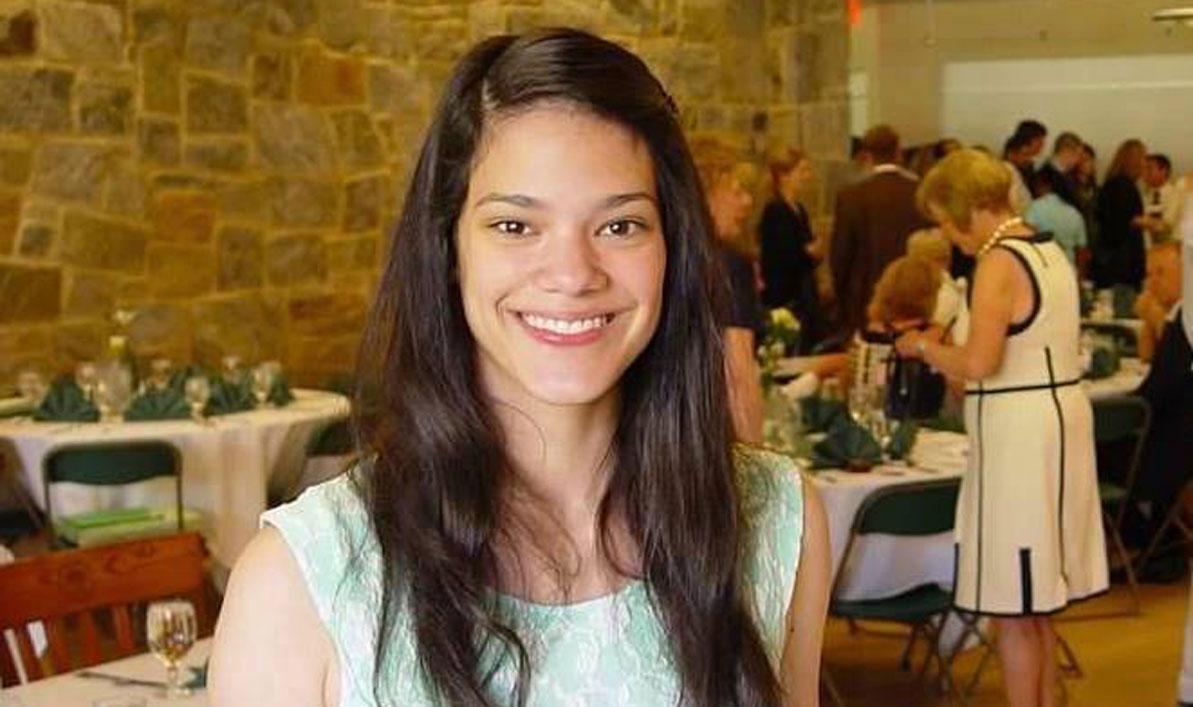 Editor's Note: The interview below was conducted by graduating HCC student Diamond Smith '21 for Campus News and appears in the publication's May 2021 issue and on its website under the headline "Meet Marissa Perez, award-winning poet who got her start at community college."  It is republished here with Smith's permission.

In 2020, as a student at Holyoke Community College, Marissa received the prestigious Glascock Poetry Prize from Mount Holyoke College. She is now a junior at Hampshire College.

Up-and-coming writer Marissa Perez experienced childhood in New England and was brought up in Northampton, Massachusetts. Perez was named the 97th beneficiary of the Glascock Poetry Prize, whose original publication involved an astonishing arrangement of 10 works. The victors of the honor comprise scholars like Sylvia Plath, Anna Ziegler, and James Merrill. Coming into her second junior semester at Hampshire College, Perez is seeking a degree in creative writing. Perez is a pupil of observation and deep-rooted lifelong lessons she extracts through the act of literature. Her influences combine the novelists Hanya Yanagihara and Joan Didion. My interview with the poet:

Do you believe that growing up around Northampton has influenced you to be a poet and creative writer?
The most significant part of living in Western Massachusetts is the variety of community activities and events. In Northampton, for example, there is the Broadside Bookshop and the Academy of Music. Since there was such an abundance of possibilities and an emphasis on the arts, it fueled my desire to do more. I wanted to be further involved in the arts and the writing culture. When I was younger, there would always be some sort of new and upcoming author who would come to the Broadside Bookshop and have a performance at the academy of music. It was just a giant playground for me because it is an environment that is being fostered that promotes creating your work and being as creative as you can.

What was your experience entering HCC as a creative writing student? How did it prepare you for where you are now?
Holyoke Community College is where I met some professors who took a very keen interest in me. It was the place to slow down and become in charge of what I was interested in and where I wanted to go. It was almost by chance that I took a class with Fred Cooksey, who was interested in my writing, and through him, he introduced me to Carolyn Zaikowski, who are both English professors. It gave me a place to take a pause and reevaluate what I wanted to do with my profession and form relationships with these professors who were so invested in what I was doing as an individual. They had the motivation to pull me aside and got to know me as a person, which was special to me.

In 2020 you became the 97th recipient of the Glascock Poetry Prize with one manuscript comprising ten works. You are also the first community college student to win it in 75 years or more. It's a prestigious honor. How has that positively impacted your career path as a writer?
It humbled me. To know that I won the prize, was the indication that I needed. People cared about what I was writing and took an interest. I had the ability to reach a wider audience. It motivated me to refine everything I had written even more. I was facing some judges whose work I was so enamored with, knowing they believed in me, drove me to work on continuing to reach those audiences.

I read one of the pieces you have written, called "Pacific Coast Highway." I would welcome you to elaborate on the intensity of emotions within your poem and what was happening specifically in your life at that time.
I remember a time in my life; I had a vicious wake-up call that required me to sit there and think, "What could I have done. How did I not see this coming? How did anyone not see this coming? What would I have done differently if I had to go back in time?" In the last couple of years, I reflect on almost every aspect of my life. Just for the sake of processing and understanding myself further. The poem "Pacific Coast Highway" talks a lot about foresight and knowing what comes before. It also deals with the dilemma of, what if you don't know, and what if there's no way to tell what's happening. How do you deal with that? Do you place guilt on yourself? Or do you place blame on the fact that we as humans are not built to see into the future? That was a very difficult time in my life, with a lot of loss. There were a lot of questions I had if I could have prevented certain events. It just a reflection on unforgiveness for myself and everyone who knew me at the time; going forward, how we can check in on things. How to maintain things for what they are and focus less on taking people for granted.

The Academy of Music Theatre had presented a feature performance with award-winning poet Denice Frohman, a poet, performer, and educator from New York City who has received awards for her literature and stage experience. This program has included you as a rising poet. How would you describe that experience?
It was also a very humbling experience. Everything that happened, is a very humbling experience. I knew of Denice Frohman, and she is such a powerful poet and writer. I remember sitting down and getting an email that was inviting me to read alongside her in an event (which happened to be on my birthday). I almost didn't do it at first because of the fact it was my birthday, and I had thought it wouldn't have been safe to go out by then, or maybe I was going to plan something else that day. The reason I chose to do the event was that I felt that I was being asked to say something and I also had things to say. I had things to say in terms of what Denise talks about in her poetry, belonging, and action. I realized, I was being asked to read this stuff alongside a woman of color, who wrote so poignantly on the relations between the power of the United States and, and the rest of the world as it exists for people of color. To know, I was the person who was in the thoughts of those who organized the event felt so special because I knew somewhere between the works that have been going around, I had been speaking to people who were reading them. I have been speaking to the readers in some subtle way about that same power dynamic. It was special in multiple ways because it really set the stage for me to join someone who has something to say and had something important to question. And that it was OK for someone like me who writes, to not know all the answers. I think that is the same with Frohman's poetry, sometimes there's no feasible end in sight, and a part of the reason why I like to write is that I don't know the answers. I think writing is an ongoing act that can help me see a clearer picture of the world, myself, and others.

I understand your influences for poets include Joan Didion and Hanya Yanagihara. How did both writers influence your own poetry?
Didion is an American writer and essayist known for her concise literary style and eloquent depictions of social conflict and interpersonal separation. Yanagihara, raised in Hawaii, is best referred to as a novelist, and travel writer. She can be read as an existentialist. Yanagihara's words capture emotions and encapsulate us to reflect on ourselves.Both Didion and Yanagihara are known for their fiction work. It's so funny because reading both of their pieces read so much like poetry, just in a different format. I felt so strongly about those pieces that I had to write traditional poems in order to distill those feelings and string them out. My favorite work by Yanagihara is called "A Little Life," which is about a group of best friends living in New York City- post-grad. The language that is used in Yanagihara's work, as well as Didion's, is so electric and often about specificity. Almost what I call, chewable, like you can swash what they've written in your mouth and taste it. It is very tangible. Those are two authors who, I feel, are masters of specificity.

I understand you are in the second semester of your junior year at Hampshire College; how are your studies going now? What are you interested in for the future?
I've been plagued for the past several years with the idea that I don't know what I want to do, and that's a scary question. But I think, in that worry and anxiousness, I figured that the ideal path for me would be not to shoehorn myself into one profession but, if I can focus my core path on writing, then I have the ability to stretch myself and especially writing, not just fiction, but to follow someone halfway around the world for a day and to learn this task for the sake of writing about it. Writing for me is multiple different careers, and it would not just be the idea of just being a "writer," but the idea of being a participant of the world and writing about it. Even tiny little blurry experiences that just don't see the light of day, in any sort of book. For example, how do people come up with new shades of color? That is a very specific and blurry concept, so to be in very enriching identities and writing about them is the absolute life worth living for me. Hampshire also manages to foster that kind of thinking; I'm having a very exciting time here so far. I think I am allowed to be in utmost control of my own curriculum. At the same time one of the keystones of a Hampshire education is for student bodies to educate their educators, and always ask why. Hampshire is really focused on never being satisfied with what you know, and that's me at my core. I don't feel that there is an end to education.

Anything you'd like to add?
I think my decision to leave Manhattan and complete a couple of years at HCC may have saved my life. It was that middle ground, the liminal space, that I needed to mold myself into. I really believe the stigma against community colleges is a disease - because it bridged such a large gap. But it is also a stand-alone institution that is also the basis for other educations - other discoveries. So I believe if I had never gone to HCC, I surely wouldn't have met the professors who worked together to bring me such emotional success. It was Professor Dave Champoux who submitted my manuscript for the Glascock Prize. So without that, I would not have had that connection there. It really was the place where the magic happened. I really think this was the place where I first had a support network, and I will always be grateful and humbled for that.