Irony on the River 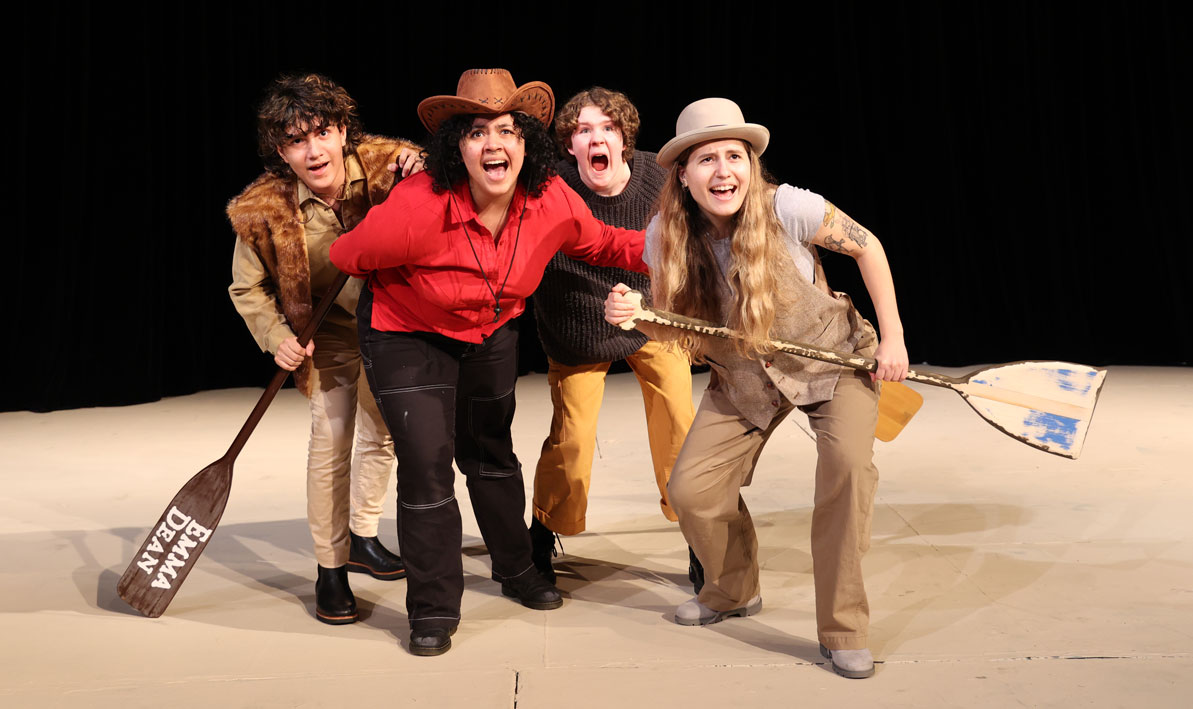 Despite the title, there are few men and no boats in the Holyoke Community College Theater Department's fall 2022 production of "Men On Boats."

That is by design.

The play, written by Jaclyn Backhaus, is a "true-ish" retelling of an 1869 expedition down the Green and Colorado rivers and through the Grand Canyon, viewed through a contemporary lens. A historically accurate portrayal would have demanded the 10 explorers in the four boats be played by cisgender white men. According to the playwright's directions, however, "The cast should be made up entirely of people who are not." She specifically mentions including female-identifying, racially diverse actors, as well as LBGTQ, nonbinary, or others.

"We have a wonderfully diverse population at Holyoke Community College, and I wanted to invite anybody and everybody on the spectrum to audition," Sandoval said.

The result is a 12-member, gender-fluid cast that includes 10 women or nonbinary persons and two men. Only one of the "men on boats" is a man.

"That's just the way it turned out," Sandoval said. "I didn't ask anyone who auditioned where they fit in. I just thought it would be a wonderful opportunity to cast the best student-actors and not consider whether they were male or female."

HCC student-actor Vesper Soto of Springfield leads the cast as Major John Wesley Powell, the one-armed Civil War veteran who was commissioned by the Smithsonian Institute to captain a nine-member volunteer crew and map the uncharted western terrain, record geological data, and document their encounters with indigenous people.

Although the play is not a comedy, Sandoval said the humor in it comes from the irony of a (mostly) non-male and non-white cast playing male characters, as well as the incorporation of contemporary point of views and language. (The characters say "like" and "cool" a lot.)

"The story is more interesting with mostly women, and it's funnier," Sandoval said. "But the comedy comes from real life as opposed to slapstick or camp."

As for the boats, or lack thereof, Sandoval said some productions of the play have actors wearing them like aprons as they move around the stage, but she and stage designer Matt Whiton decided instead to rely on the audience to imagine them.

"I believe the audience comes in ready to believe, and if the actors are doing their part, it works," Sandoval said. "We imagine them going over waterfalls, and we imagine that they're starving, and we all just believe. When the audience is watching 'Romeo and Juliet,' no one stands up in the theater and yells, 'He didn't really die. Don't worry.' The audience accepts this. So, the first scene in 'Men on Boats' is them on the river, and they've got paddles, and they're paddling, and I believe the audience will go along with it."