"I've had a lot of opportunities to travel, but it's come at the cost of stability in my life. I could finally see how my resistance to higher education was holding me back from my potential." – Nathan Wytrwal '20 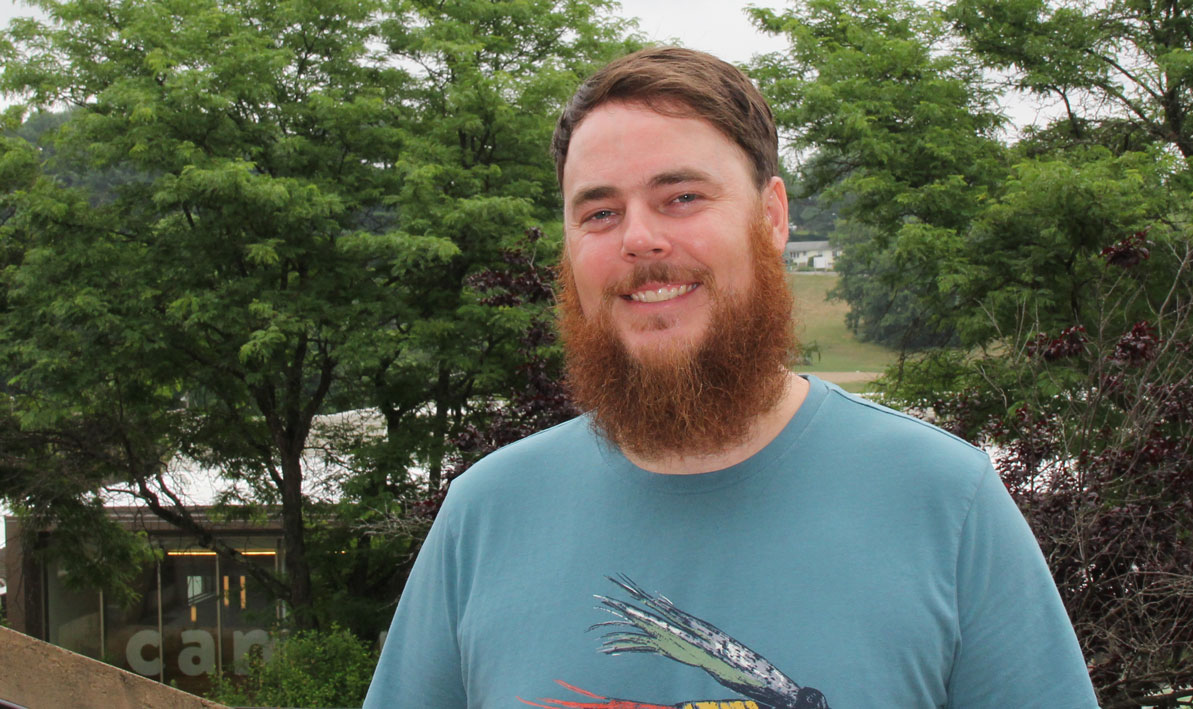 Nathan Wytrwal got his first good glimpse of Holyoke Community College through the service window of a food truck.

At the time, Wytrwal was working for the Holyoke Hummus Company, selling falafel sandwiches to the lunchtime crowd in the HCC campus courtyard. The job was the latest in a long succession of positions he'd held since graduating from Quabbin Regional High School more than a decade before, during which time he had traveled around the U.S., laboring mostly in forests, gardens and fields in an effort to learn more about the world and about himself.

As he surveyed the scene at HCC, the introspective 32-year-old from Barre, Mass., studied the students as they ambled back and forth to class.

"I could see what was happening, and I was like, well, I want to be one of those people," He remembers thinking. "What will it take to get me there?"

What it took was being laid off from the food truck, a push that sent him to the unemployment office, where he discovered he qualified for a program that helped displaced workers pay for college.

"I guess through most of my adult life I've been housing and food insecure," said Wytrwal, now 35 and living in Holyoke. "I've had a lot of opportunities to travel, but it's come at the cost of stability in my life. I could finally see how my resistance to higher education was holding me back from my potential."

At HCC, Wytrwal explored the full range of that potential. Over seven semesters, he amassed more than 90 credits. (Typically, only 64 are required for an associate degree.) But for a couple of classes, he would have finished with a perfect 4.0 GPA.

Nevertheless, Wytrwal, with his merely mortal 3.94 GPA, graduated this spring with high honors and his associate degree in engineering. He plans to study mechanical engineering this fall at UMass Amherst.

Wytrwal made his presence known on campus in other ways as well. He served as a New Student Orientation leader, member of HCC's Green Key Honor Society, and president of Alpha Xi Omega (the HCC chapter of the Phi Theta Kappa national honor society). He also worked as a math tutor and held a work-study job with HCC's Student Success and Retention program.

"I think my involvement in New Student Orientation and being able to share with incoming students the resources that were available to them really helped me open up and realize I had the capacity for a lot more than just pursuing academics," he said. "I really enjoyed sharing the community that I found at HCC and encouraging others to get involved and take on leadership roles."

Coming out of high school, Wytrwal did not see college as an option. Part of that was not wanting to be stuck in the tiny town where he grew up.

"I didn't see going to college for education's sake as being part of my journey," he said. "I had lived in the same town my whole life. I knew enough about that to know that I wanted to experience more, I wanted to know more, and I didn't know what I wanted to do or what I wanted to learn or how to contribute back to society, ultimately, and so I traveled. A lot."

His travels took him from coast to coast and north to south. Over the years he's lived in Denver, Portland, New Mexico, Florida. He's worked as a farmhand, gardener and landscaper. He's done forestry work and volunteered for nine months at a Buddhist monastery in northern, California, learning arc welding and how to form concrete.

Though he started at HCC as liberal arts major, he switched to environmental science before finally settling on engineering, though his focus remains squarely on environmental issues.

"I think I just realized I wanted to be building and creating," he said. "The engineering track seemed a lot more in line with trying to come up with working solutions to problems."

To that end, Wytrwal sees a career for himself developing new green energy technologies, a far cry from his previous work as a food truck operator.

"I'm really overjoyed that I landed at HCC," he said. "I couldn't have asked for a better experience, and I think I'm very well established for success moving forward."

STORY and PHOTOS by CHRS YURKO: Nathan Wytrwal, at HCC