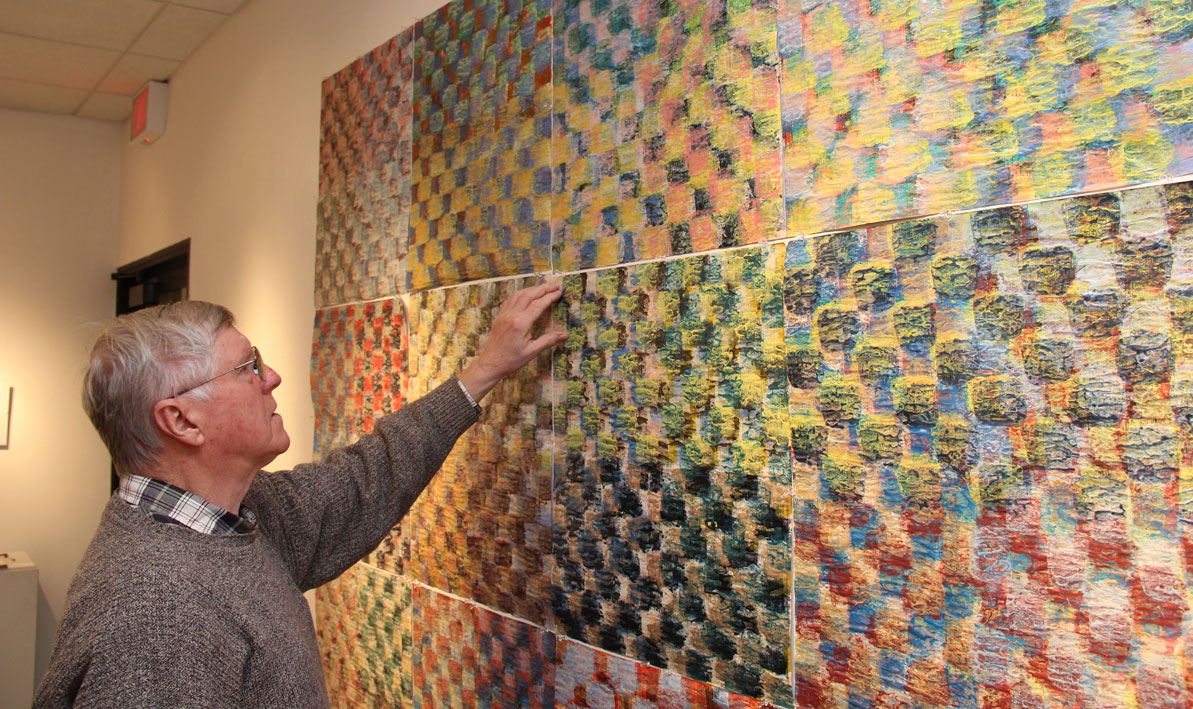 Several years ago, artist Frank Cressotti found a new purpose for the old newspapers piled up in his Southampton home and studio. While working on a series of figurative paintings, he started using the newspapers to soak up excess paint from the canvas.

"Over time, I would use the same newspaper over and over again," Cressotti said. "I had stacks of this blotting paper, and I liked the way it looked, so I started fooling around with them. Little by little, they became something in and of themselves."

The result is "Pages: Paintings on Newspaper," a new collection on display through March 10 in the Taber Art Gallery at Holyoke Community College, where Cressotti taught art and painting for 46 years until retiring in 2015.

Cressotti, 76, who still serves as curator of the HCC and Donald Taber art collections, will give a gallery talk about his current project on Thursday, Feb. 17, at 9:30 a.m.

"It's an honor and a privilege to have Frank's work here," said Taber Art Gallery director Amy Johnquest. "The way the paint absorbs on the surface of the newspaper is beautiful and not like anything I've ever seen before."

Cressotti explained that the process of turning the delicate newsprint into art took time.

"I wanted the paint to build slowly and get away from making some kind of a precious mark and being in too much control," he said. "I would paint an area and blot it, which would take paint off and spread it over the medium."

He then had to lay the newspaper sheets out flat to dry between applications. That took up a lot of studio space, he said, and made the process longer. The finished works have an almost woven texture.

"My sister was a quilter, and my mother used to make braided rugs," he said. "Some of the pieces remind me of the braided rugs my mom used to make."Often, the photos, advertisements, and stories from the newspapers – almost exclusively the Springfield Republican – can still be seen through the paint.

"As I was blotting and rubbing, I'm reading obituaries – sometimes of people I know - I'm reading the town news, the sports sections, recipes," he said. "So I was getting into what was going on in the community by way of making the paintings, even though that has nothing to do with the paintings themselves."

In a twist on philosopher Marshall McLuhan's famous phrase, the medium is definitely NOT the message in Cressotti's work – it's the messenger that's the medium.

"I've always liked newspapers, he said. "I hope they never go away, even though that is not being done for that purpose. I'm happy to recycle them. I've always worked that way, trying to incorporate things that were around, to give them another use or purpose, rather than dumping stuff out and throwing things away."

The Taber Art Gallery, located of the lobby of the HCC Library on the second floor of the HCC Donahue Building, is free and open to the public Monday through Thursday 10 a.m. to 5 p.m. during regular school sessions.For more information, please contact Amy Johnquest, at (413) 552-2614.