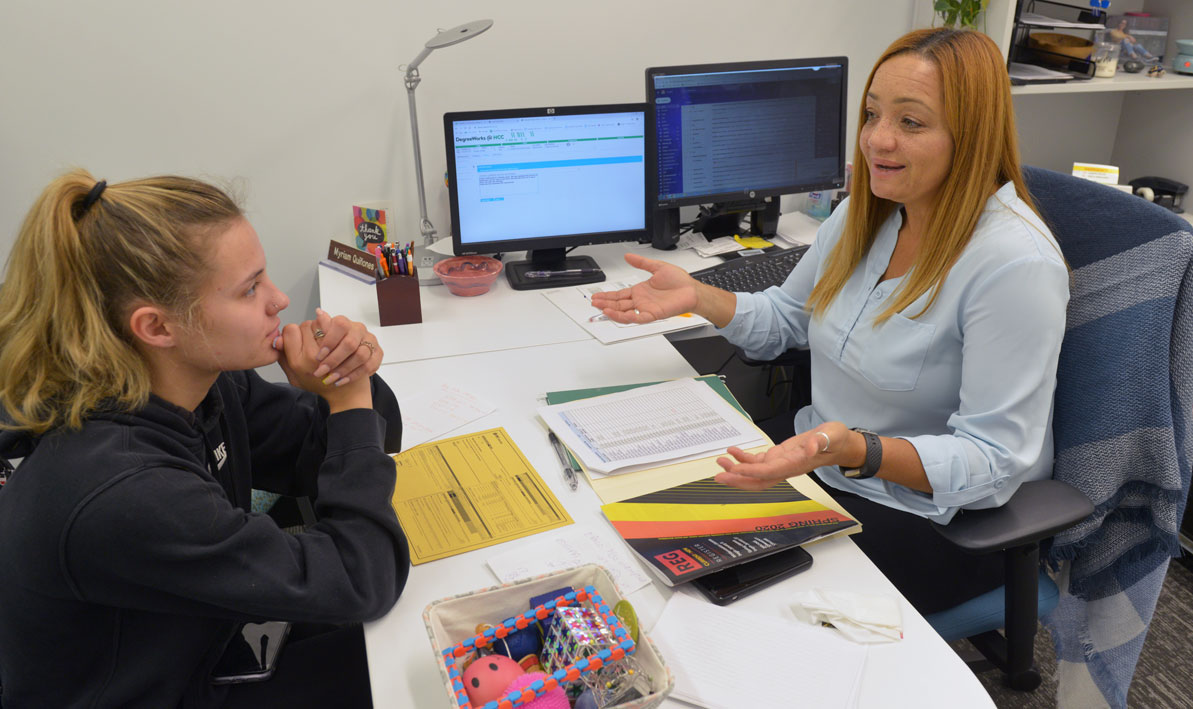 By DUSTY CHRISTENSEN
Courtesy of the Daily Hampshire Gazette

When Xiomara Rivera first got to Holyoke Community College, she had no idea what to do.

"I didn't know what financial aid was," she said. Nor did she know what classes she needed to take. "I felt a little bit lost," she admitted.

That was until she met Myriam Quiñones, however, the coordinator of HCC's Multicultural Academic Services program. Eating lunch in a small conference room at the University of Massachusetts Amherst, where Quiñones had taken a group of students on a "transfer tour," Rivera said that Quiñones helped her sort everything out and feel more confident – a sentiment echoed by fellow HCC student Jiovanny Montañez.

"Without her, I would have flopped at STCC," Montañez said, referring to Springfield Technical Community College. But as he was struggling at that college, he got on the phone with Quiñones about transferring to HCC and has been doing well in college since.

"Within two hours, I was enrolled at HCC, enrolled in classes and had my financial aid all set up.

"For the past 16 years, Quiñones has been ensuring that HCC's students have access to bilingual services that she wished she had when she first came to the college herself – but this group  will be the last she helps herself.Friday marked the end of an era; it was Quiñones' last day at HCC after 21 years working there. She and her wife – well-known local organizer Jossie Valentín, a former Holyoke city councilor and HCC counselor – are moving back to Puerto Rico.

When somebody first drove Quiñones "from downtown to the hill" where HCC stood, she had only recently arrived from Puerto Rico as a 18-year-old single mother who had dropped out of high school. As someone who had "no intention of going to college," she said that she too was lost in an unfamiliar institution where she and other Hispanic students felt marginalized. She recalled being in the cafeteria with a group of friends and getting "shut down" by somebody at the college who said they were "too loud."

"We had a specific corner we'd go to to be as far away as we could," she said.

But that's no longer the case. Sitting in her office Wednesday in the college's "El Centro" area, which houses her Multicultural Academic Services program and other student services, she said she often hears students in the nearby cafeteria speaking loudly and happily, unafraid: "It's very different and it feels good."

A big reason for that welcoming environment is Quiñones, who has fought for more inclusive policies for students of color, LGBTQ students, those whose first language isn't English and many more ever since being hired as the school's English as a second language program coordinator in 2003.

"We worked together for quite a while trying to serve the urgent needs of our students, particularly those who spoke relatively little English," said community activist Orlando Isaza, who worked for a time with Quiñones in the ESL program.

Isaza, who ended up officiating the wedding of Quiñones and Valentín, said that Quiñones' work was critical for so many students over the years.

"I love Myriam," she said. "I think she's a great woman and I was very honored to work with her and be at her side."

Though Holyoke was not her first home, Quiñones embraced the city and became an institution unto herself.

"She's the one who made me really fall in love with the community" of Holyoke, said Valentín, who met Quiñones at HCC.

Quiñones was on the search committee for a bilingual counselor position Valentín had applied to. The two became coworkers, and it wasn't long before they moved in together, Quiñones said. They've been together ever since.

"She made me want to get involved, pushed me to say I wanted to run for office," Valentín said. "She just literally encouraged and supported me every step of the way."

In 2006, Quiñones was named as the first coordinator of the college's Multicultural Academic Services program, or MAS. She said that for more than a decade she has been fighting for a fully staffed space that provides culturally responsive services to the many students who, like her, arrived at the college needing to take ESL classes or wanting a comfortable place to turn as a student of color who may be the first in their family to attend college.

Quiñones' own parents live in Puerto Rico, as does Valentín's aging father. And when Hurricane Maria devastated the island in 2017, the couple got involved in relief efforts but yearned to do more.

"We realized that was not enough," Quiñones said.

"We were changed people and we felt like we want to be part of this beautiful island again," was how Valentín put it.So the couple started making plans.

They sold their home in Holyoke and have laid the groundwork to return to the place both had left so long ago; Quiñones arrived on the U.S. mainland 32 years ago and Valentín 23 years ago.

On Saturday, April 2, they depart for Nashville, to spend time with one of their two daughters and their young grandchildren.

They would have left earlier, Quiñones said, but wanted to wait until their younger child graduated from college.

Though they don't know what they'll do full time in Puerto Rico, they are excited to spend time with family and friends and decide where to put their roots down. Quiñones said it's her dream to start her own tourism business eventually.Quiñones and Valentín also said they felt at peace leaving Holyoke after the most recent citywide election, which produced the most diverse City Council in the city's history and the first Latino mayor of Holyoke.

"I leave happy," Quiñones said. "I am so proud of this city that saw me become the professional woman I am today."

Dusty Christensen can be reached at dchristensen@gazettenet.com.