A Q&A with HCC's first VP of ASA 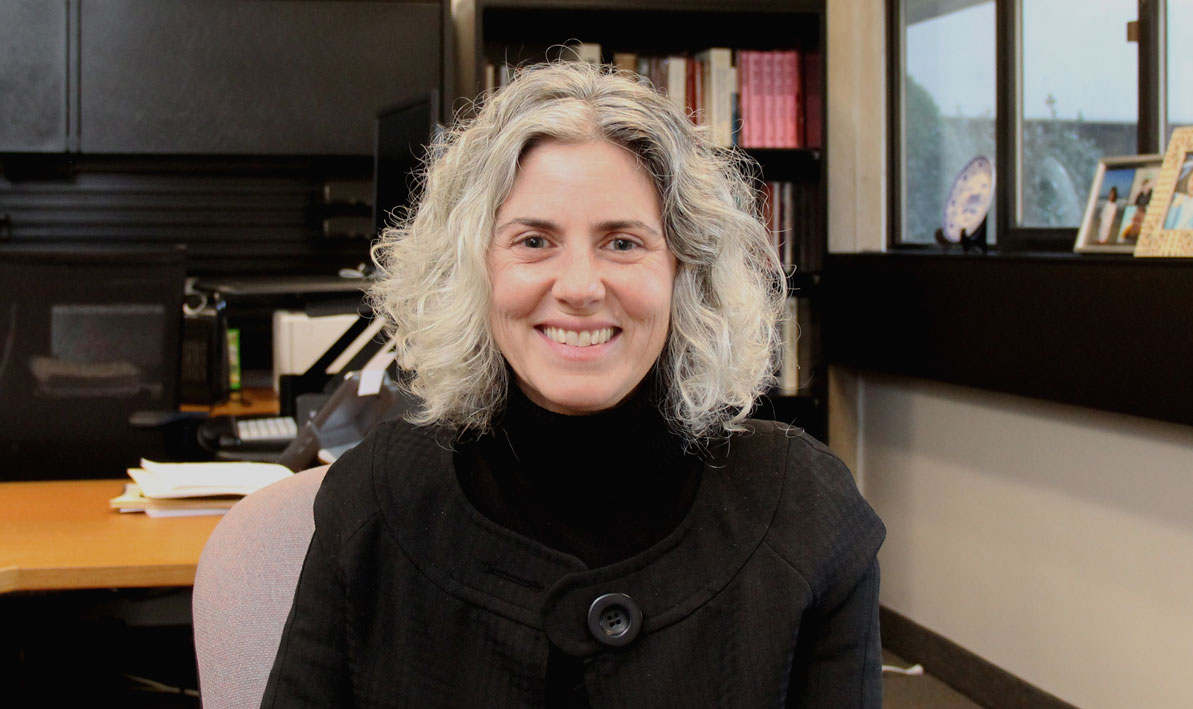 Rachel Rubinstein is HCC's first vice president of Academic and Student Affairs. Prior to her arrival Oct. 2,  she  spent 16 years at Hampshire College in Amherst, where she was a professor of American literature and Jewish Studies and between 2011 and  2018 served as dean of Academic Support and Advising.

She sat down recently to talk about her academic interests, what drew her to Holyoke Community College, and how she views her job, which is a newly unified position, combining oversight of both Academic Affairs and Student Affairs

You have a very interesting background.

I grew up in the New York city suburbs, Hastings on Hudson, so Westchester County, but my family is from Mexico. My grandparents were all immigrants from Eastern Europe, Cuba, and Spain, and in the 1920s and ‘30s, they couldn't get into the United States because of the immigration laws, and they all ended up all in Mexico City, where they met each other and married. My parents were born in Mexico City and grew up there and got married there, and then they came to the states, because immigration laws had changed again, and that's where I was born and my siblings were born.

I grew up in a Spanish speaking household. I never studied Spanish formally, and I am very self- conscious about speaking it because I am one of those immigrant kids that started speaking in English all the time, but I understand it. I can read it, and then I studied Yiddish. My family were Jews from Mexico City, so that's a specific kind of population, a very small population of Mexico City.

When did you figure out you wanted to work in higher education?

I went to Yale to study literature, and then after college I spent a couple of years on a volunteer program in Israel. For the first few months I studied Hebrew on a kibbutz and then the rest of the year they sent us around the country to various communities – immigrant communities, refugee communities, Palestinian communities. I spent time in different cities working in those communities, which was really interesting, then I stayed for another half year or so and as a counselor for a high school program, and then I applied to graduate school. I knew then that I wanted to be a professor, a scholar, a teacher. My field of interest was literature, migration, immigration, multi-lingualism, and the Jewish-American experience.

You earned your PhD from Harvard. What brought you to western Massachusetts?

I met my husband at Harvard (Justin Cammy). He does Eastern European literature. He got a job at Smith, where he is still teaching. I was adjuncting in the area. I taught at Smith, Mount Holyoke, and then I got a position at Hampshire, which was a visiting position at the time. After a few years, I was hired full time to teach Jewish-American literature. I taught American literature from origins to 19th century, and I taught a literature of immigration course. I taught courses at the National Yiddish Book Center, which is right there on campus.

In 2011, soon after I got tenure, or what is the Hampshire version of tenure, they tapped me to be the dean of Advising and Academic Support. That was really the position that made me realize I really like administrative work.

When you're the dean of advising, you're working with the entire school, across the curriculum. You're working with all the deans, all the students, all the faculty, because you're working on student success and support, and you're also working with Student Affairs, all the time. I got this totally different view of the institution, and I really loved the work. It was supposed to be for three years, and then after three years, I was like, I would do it for longer, so I did it for another year and another year and then two more years. In the end I did it for about six years.

Did the uncertainty of everything going on at Hampshire cause you to look elsewhere?

I won't say it was a happy time. It was very stressful, but I had a sort of the realization that if this was happening to Hampshire, this could happen to any small, private liberal arts college, and Hampshire was not the only college that was struggling and possibly closing or merging, so this was clearly a trend. I started reading the book Demographics and the Demand for Higher Education, and other books on the future of liberal arts education, to learn what is the future of a place like Hampshire, and the more I read, the more it turned into a real existential dilemma for me. It made me rethink the whole profession and what I was doing and who I was doing it for.

Obviously, as a graduate of Yale and Harvard, a community college experience is quite far removed from your own.

The other thing I should also say that attracted me to HCC specifically, because there were other local community colleges that had some open positions, was Holyoke. The idea of being at an HSI (Hispanic Serving Institution) was really appealing to me. Holyoke is a city of immigrants and this is what I do.

You are the first person to have this consolidated position at HCC. How do you plan to proceed?

I think that most of the community colleges in Massachusetts have this model so there are other VP ASA's I can appeal for their wisdom and expertise, and I honestly think that it's all about having a good team. No one person can do it all. I think I have a good team. I think it's also about not privileging one area above the other and really respecting the work of Student Affairs in a way that elevates it. Folks in Student Affairs are educators too. And then it's important for Student Affairs to really respect the work of that faculty do in the classroom and respecting faculty as teachers and scholars. I feel like that's the benefit of having come from this advising position at Hampshire; I really did sit in between those two divisions. I think the alignment is so necessary.

What's the advantage of having one person oversee both areas?

I think the more faculty understand what students are dealing with outside the classroom, the better they can see how students experience the academic program, not just in their classes, but how they move through the institution. At the same time, I think it's really important for Student Affairs staff to work with faculty. What faculty are being asked to do is very taxing because it's not just about teaching anymore. It's about advising; it's about mentoring; it's about student support. Mental health needs are so tremendous, things that students are dealing with are so tremendous, and faculty need help, so it can't just be this staff person over here and that faculty person over there each working with a student. There has to be this network where people are communicating with each other. I've heard stories, like a faculty member said to me, I struggle because what do you do when your students come to class hungry? What do you do? That's real, and it can't be solved just by Academic Affairs. It also can't be solved only by Student Affairs. It has to be a coordinated effort.

You've been here a month now. How's it going?

At the end of every day, my brain hurts. It's very exciting. I'm learning new things every day. I'm learning how systems work and I'm meeting tons of people and really learning about the work that everybody is doing. It's on a much larger scale than I'm used to. It's a much larger institution. So just that, trying to wrap my head around all of the different programs, all of the different offices, but I see so much opportunity and so much potential and so many wonderful things are going on. The benefit of being in this position is that I get this eagle eye's perspective; I get to see all the awesome things happening in Academic Affairs, all the awesome things happening in Student Affairs, and then share that information so everyone knows what everyone else is doing.

I really have to make a concerted effort to meet students because I don't have that time in the classroom with them. I'm not in that advising capacity where there are constantly students coming through my door.

How do you plan to do that?

I would like to create a student advisory council, something separate and distinct from the Student Senate, which is a governance organization. Student Senate has business to do. They plan things, they fundraise, they're student government. But what I'm imagining is a sort of kitchen cabinet to advise me, that would be my advisory council, where I can go and say, I'm thinking of this - what's your perspective on that? Or, what do you think you need as students? Tell me more about your experiences here, so we can figure out how to support you and help you succeed. I want Student Senate to help me put that together but what I envision is not the same. They would not be governance organization. They're job would be advisory. That way I get to interact with more students and really hear about what they're experiencing. I did something similar at Hampshire, and it was so valuable.

Read the press release welcoming her to HCC ...

INTERVIEW and PHOTO by CHRIS YURKO: Rachel Rubinstein in her office at HCC