'Proud to be myself'

Students on autism spectrum talk about campus life at HCC 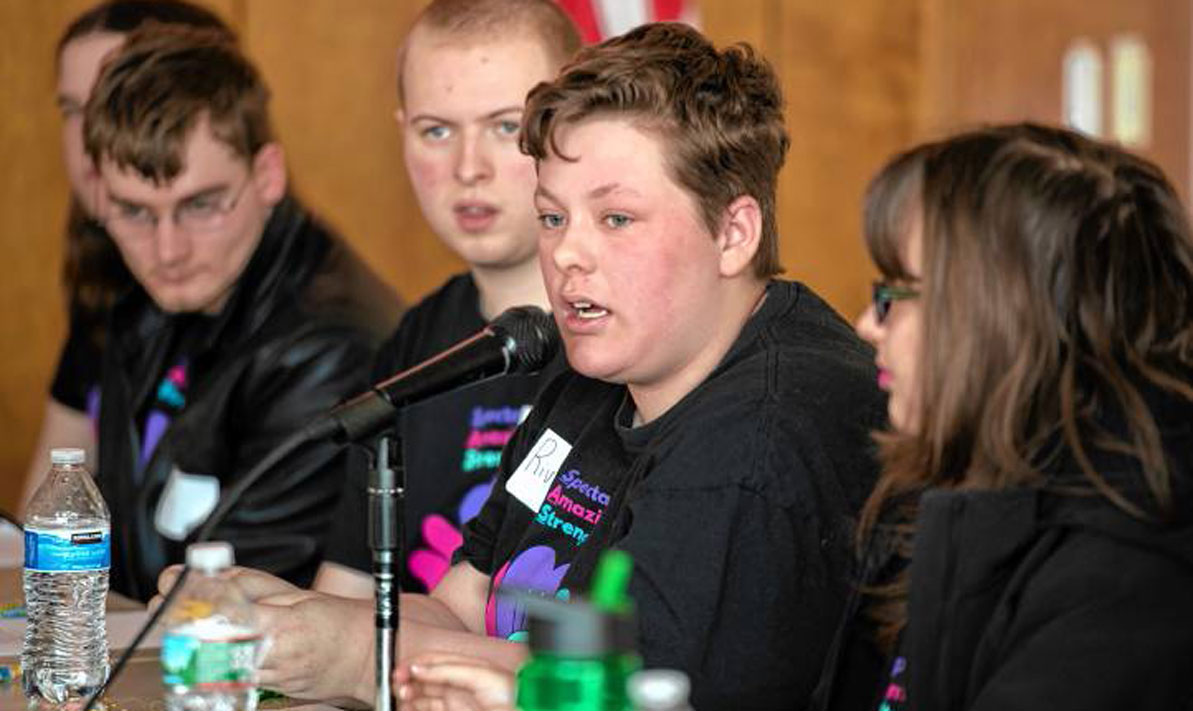 Editor's Note: This story appears in the April 12, 2019, print edition of the Daily Hampshire Gazette and online on GazetteNET

By GRETA JOCHEM
Courtesty of the Daily Hampshire Gazette

Tiffany Cavanaugh was diagnosed with autism at age 5, but she didn't tell people about it until she was 14.

"It took me a while to accept my diagnosis," she said, speaking on a panel of Holyoke Community College students last Thursday.

Cavanaugh knew some students at West Springfield High School who, like her, were on the autism spectrum, but she wasn't familiar with the larger community. That changed when she came to HCC in the fall of 2016 and joined Students on the Autism Spectrum, or SAS.

Cavanaugh, 21, who is now the president of the SAS club and a liberal arts major who hopes to graduate this year, was one of nine students from the group who spoke to prospective HCC students last week about their experiences at the school and the importance of the club. The event, hosted by SAS and the school's admissions office, included the panel, a tour and other activities for a group of prospective students and their parents. It was part of a series of events put on by SAS in April to celebrate Autism Acceptance Month.

The SAS leaders, who initiated last week's event, pointed out that "there was a need in the community to share with potential students the resources available and the experience at the college for those individuals that indicate that they are on the autism spectrum," said Bryn Nowell, an HCC admissions counselor.

According to the Centers for Disease Control and Prevention, around 1 in 59 children has been identified with autism spectrum disorder, which can include sensory sensitivity, a need for routine, and challenges with some social interactions. But as one panelist pointed out, it doesn't affect everyone in the same way.

"No one can look autistic – it is a spectrum," Tia Dwinell said.

Panelists spoke about resources available through the Office for Students with Disabilities and Deaf Services, including how to receive extra time on tests, notes from classmates and assistive technology like speech recognition software.

"That allows for our students to make sure they are receiving accommodations that allow them to be as successful academically as possible," Nowell said of the office and its services.

Many current students in SAS said that middle and high school was challenging for them socially, but now the student group gives them a sense of community and a support system.

Dwinell, of Granby, said she was not comfortable with her diagnosis in high school and often felt alone – she was the only person she knew in her grade with autism. Her social worker suggested she come to SAS club, and it has helped.

In high school, Stefanie Lamothe, of East Longmeadow, was encouraged not to "stim," which she explained is a way for her to process a tough situation like feeling overstimulated by doing a repetitive action like rocking or feeling her hair. "I was trying to do my own thing to cope," she recalled.

"It can be hard to hide your autistic traits," Riv Rege said. In the group, students are encouraged to be themselves. "You can experience your autism however you want," Rege said. "I don't feel like I need to hide my autism traits."

The group is an attraction for prospective student Patrick Wilkinson, a high school junior in Wilbraham.

Damian Ramos, an 18-year-old graduate of Dean Technical High School in Holyoke who hopes to study computer software, said he wanted to learn more about the club.

Alex Fisher, a junior at Easthampton High School, said there may be some students with autism in his school, but "nobody really talks about it."

Many prospective students also reflected on their fears. After the panel, the SAS members put up large sheets of paper on the wall with writing prompts at the top about worries and hopes for college. Participants then wrote their responses on sticky notes. Their fears included "losing motivation to continue," "being on my own" and "dropping out."

In response to a prompt asking what prospective students are looking forward to in going to college, one person wrote, "finding my passion."

Other notes read "having more freedom" and "meeting more people."

Cavanaugh is glad she found the community she didn't have in high school with SAS. "I love the autism community," she said on the panel.

And though not every day is easy, she added, "I'm proud to be autistic and proud to be myself ... I wouldn't change it for anything."

Greta Jochem can be reached at gjochem@gazettenet.com

PHOTO by CAROL LOLLIS, Daily Hampshire Gazette: Riv Rege talks on a panel of students from HCC's Students on the Autism Spectrum Club for an open house April 4.