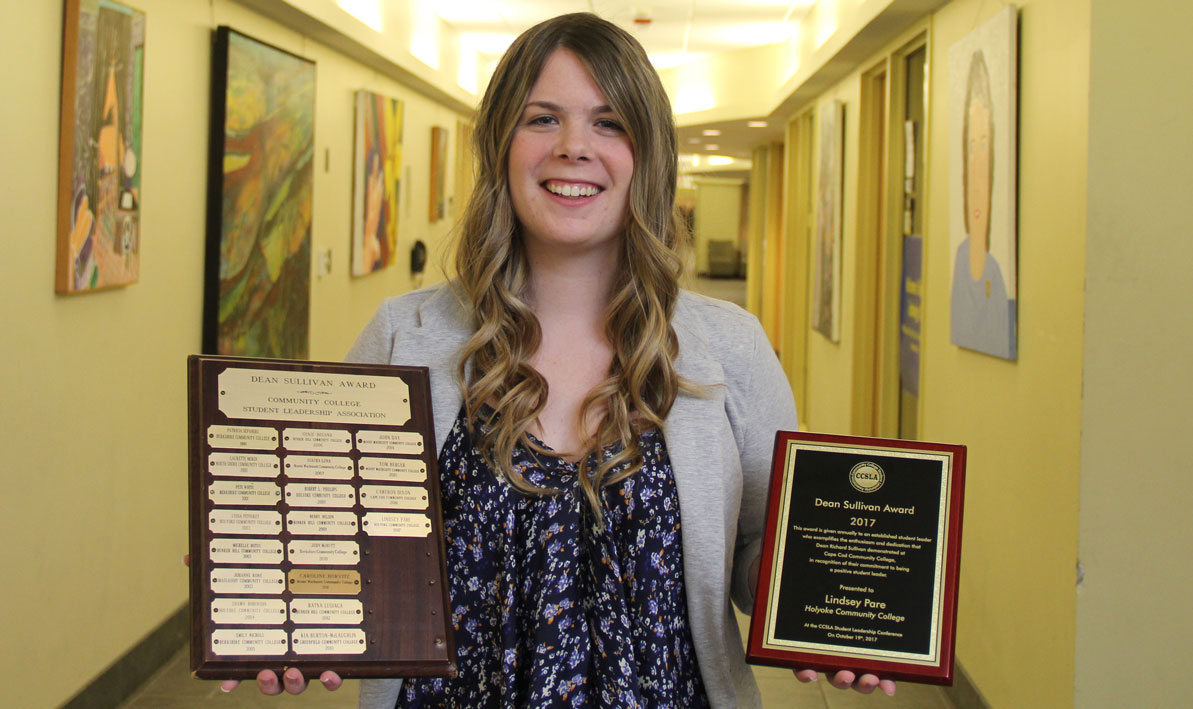 This year, she is vice president of the Holyoke Community College Student Senate, the campus governing body she served last year as secretary.

But that's not all.

But that's not all.

The 21-year-old Ludlow resident is a founding member of the HCC COMMitted Club, which is devoted to community service, and a former secretary for the HCC Military Club; twice she has received scholarships through the HCC Foundation, as well as multiple awards from HCC for academic achievement, college service, and commitment.

And now there's this.

On Oct. 20, at the annual Community College Student Leadership Association conference in Hyannis, Mass., Pare received the 2017 Dean Sullivan Award, which each year is presented to one student from all 15 community colleges in the state in recognition of their enthusiasm and dedication to student leadership.

"Her enthusiasm is exemplary," said Student Activities coordinator Elizabeth Golen in her remarks introducing Pare as this year's award winner. "She is the one who gets students to participate in any event - fundraisers, community service projects, bake sales, even webinars. You can catch her leading study groups, cheering on her peers. She readily provides guidance to fellow senators, friends and peers, always putting others first."

Recipients of the award receive a personalized plaque and a $100 gift certificate to their campus store. Also, a perpetual plaque inscribed with all the recipients' names is displayed for one year on the campus of the current winner.

"It's crazy to me that I won it and what big deal it is, given how it's given to only one person from all the colleges," Pare said. "It fills my heart with love and gratitude for everyone who supported me."

She said the award was especially meaningful given that she was nominated by her friend and colleague, HCC Student Senate president Heather Paiva Perez.

"Working with Lindsey has been an honor and privilege," said Paiva Perez. "She is the very definition of a leader."

Pare was one of 12 HCC student senators who traveled to Hyannis for the three-day conference, attending workshops and meeting their counterparts in student government from the state's other community colleges. The theme of this year's conference was "Epic Strengths."

A Foundations of Health major with a GPA of 3.88, Pare earned her certificate at HCC in medical assisting last spring and will graduate next May with her associate degree.

She plans to pursue a career in nursing.

PHOTO by CHRIS YURKO: Lindsey Pare, holding two plaques recognizing her as the recipient of the 2017 Dean Sullivan Award for student leadership.