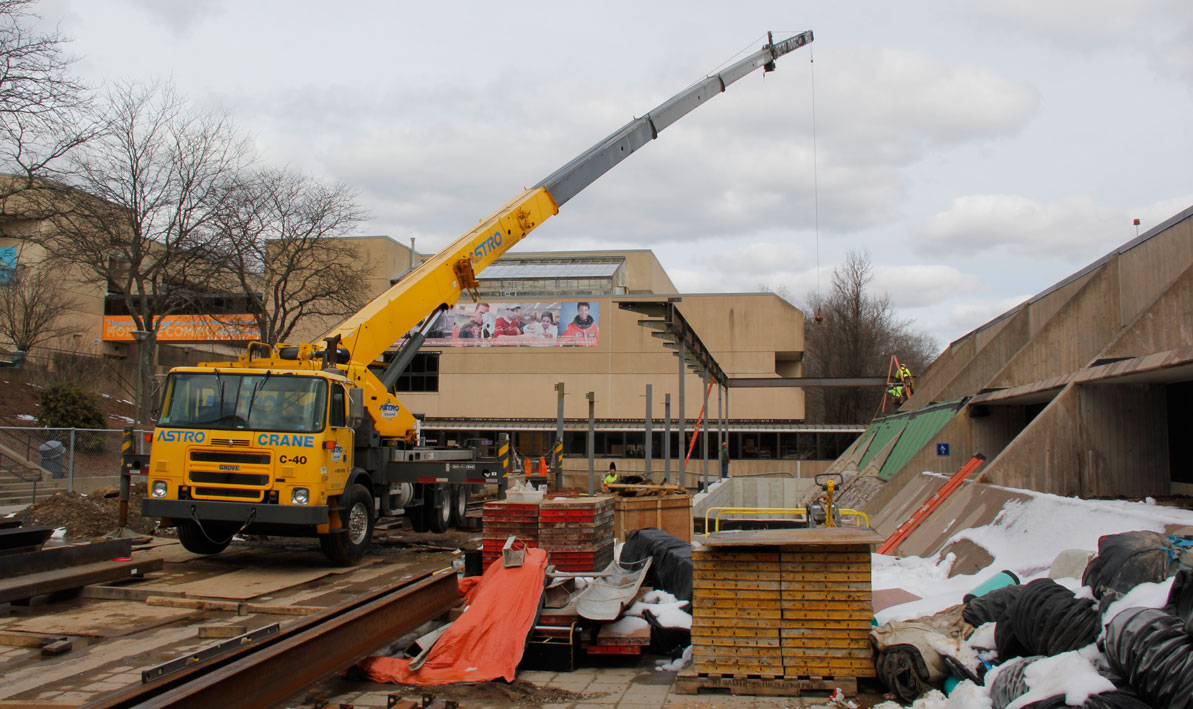 Editor's Note: This is another in a series of periodic visual updates to the Campus Center renovation project.

Work crews have begun framing the atrium that will serve as the new western entrance for the HCC Campus Center once a $43.5 million renovation on the building is complete next year.

Last week, a yellow crane with a long extension arm was positioned in the lower courtyard and steel girders stacked nearby. Since then the beams that will support the roof of the atrium have been lifted into place, giving a clearer picture of the scope of that addition.

The glass atrium will cover an area previously known derisively as "the pit." The pit was an external concrete staircase that led from the lower courtyard down to the second floor entrance of the Campus Center. Pour drainage also resulted in the pit being a collection area for water during storms.

Over the past seven months that area was completely excavated, a new drainage system put in place and a foundation poured. The atrium will cover the entrance to the Media Arts Center on the third floor of the building as well as a new stairwell leading down toward the cafeteria lobby on the second floor.

Meanwhile, on the eastern side of the building facing Homestead Avenue, workers have finished putting a roof on the new front façade that now covers a exterior balcony that will become part of an extended dining area on the second floor.   Altogether, those two additions will add about 9,000 square feet to the 57,000 square foot building.

Two weeks ago, HCC held a "Topping Off Ceremony" to celebrate the addition of the last beam on the new front face.

Inside, walls are going up in areas on the first floor that will become the future home of Admissions Department, and the Advising, Career and Transfer Center, as well as the Student Engagement area on the second floor.

A new main entrance has also been carved out on the first floor and a steel frame put up over a future foyer.

The Campus Center is expected to reopen for the Fall 2019 semester.