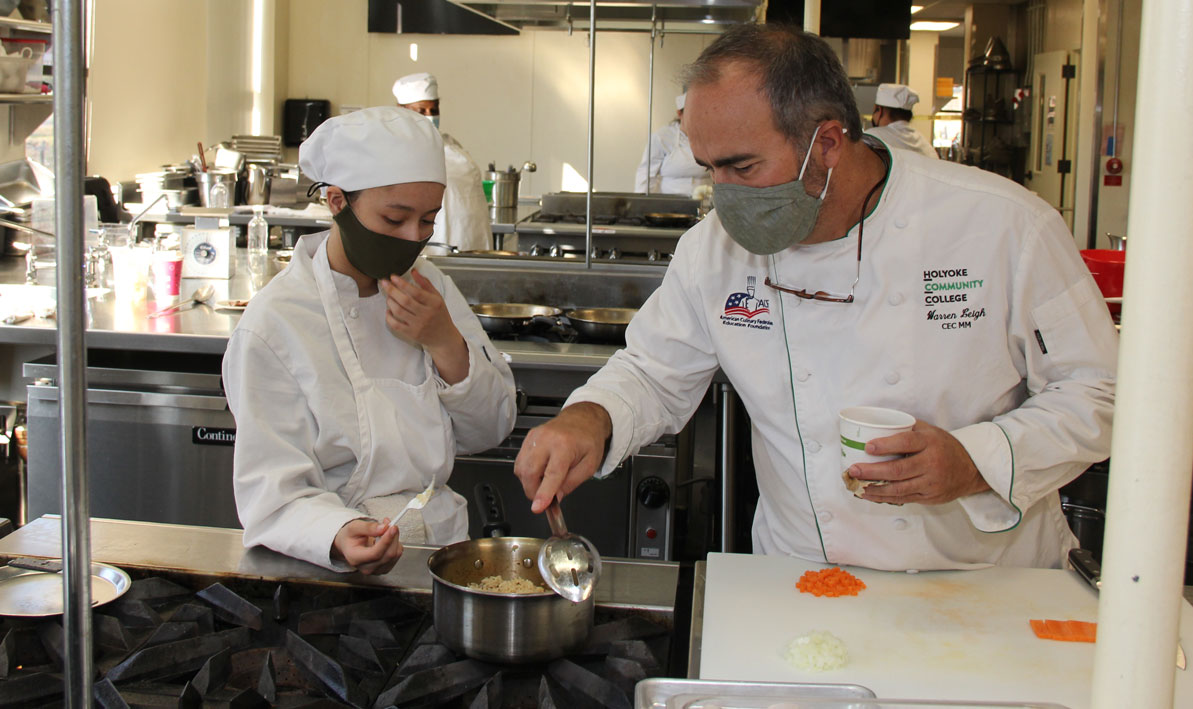 Every good cook knows some recipes call for a slow simmer, others a rapid boil.

Without stretching the metaphor too far, seven culinary arts students at Holyoke Community have in a way been on a slow simmer themselves since March, when their first-semester schedules were interrupted by the COVID-19 pandemic.

But it's tough to learn a proper sear or sample braised quail over Zoom, and, so, their first semesters were put on hold until the fall.

And then, on Oct. 28, after a seven-month hiatus, the teaching kitchens at the Culinary Arts Institute reopened, and the students were back at their stations. Since then, they have been progressing, if you will, at a rapid boil through a series of accelerated, back-to-back classes designed to catch them up before the spring semester begins on Jan. 25, 2021.

"It's definitely exciting to get back in the kitchen into a somewhat normal routine, doing what I love and learning," said student Monica Hernandez.

Hernandez and her classmates recently completed what would typically be a seven-week course, Culinary Fundamentals II, in just 2½ weeks, thus concluding their long-delayed first semester in a two-year journey toward their associate of science degrees in culinary arts.

They started their reconfigured second semester on Nov. 16 and are already halfway through their Pantry and Garde Manager course, to be followed immediately by Stocks, Soups and Sauces, which concludes Dec. 22.

The pace will accelerate even more during HCC's 10-day January Wintersession program. Students will be in the kitchen Monday through Friday, from 8:30 a.m. to 4:30 p.m., completing two classes in two weeks, Baking and Pastry Arts, and Entrée Preparation and Presentation.

All HCC classes that meet in person must be approved by the college's Return to Campus Task Force.

"Just like in Health Sciences, everybody with labs – we've all had to rethink how we're running our classes," said chef and culinary arts professor Warren Leigh. "They said, think outside the box. Well, we did. As long as everything keeps going the way it is, we're going to be done with semester two on January 15 and they'll be ready to join some of the other students for semester three classes in the spring."

In addition to the fast-track schedule, other accommodations were made, such as reducing the number of students in each section.

"We can really do six to seven, but we're keeping it at six moving forward," said Leigh. "The six stations are perfect for social distancing and whatnot. All the classes set up for winter and spring we're capping at six, knowing that nothing is going to be normal for a while."

General precautions around health and safety have been elevated in and around the kitchen on account of COVID-19.

"We get our temperatures taken as we walk in the building," said Hernandez. "Multiple stall restrooms are now single use only. We can only use the dish room one at a time. We have assigned stations. We use the same dishes for every class and we wash them ourselves so each of us has contact only with the dishes we use every day. We are a lot more mindful of personal space, contact and germs. We wash our hands frequently. I find myself washing my hands a lot more."

Of course, they all wear masks, but that does make it more difficult to be heard and understood in a busy commercial kitchen.

"Wearing the mask has really proved that we need a kitchen voice to be able to talk to each other," said Hernandez. "It's really important to pay attention and listen closely."