Welcome to Tutor U. 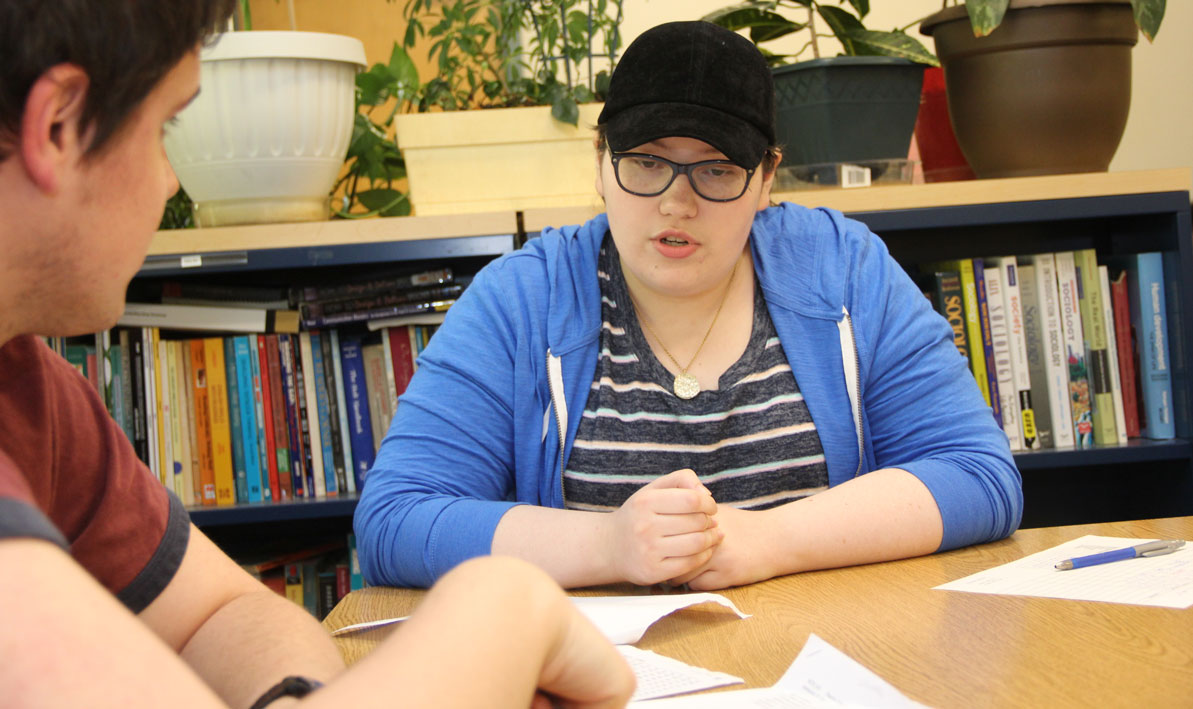 Six or seven years ago, a new student sat down in the HCC Writing Center across from tutor Kim Demers '96. As she often does, Demers asked where the student was from. The answer was Tenerife, a small island off the west coast of Africa.

"What are the odds that someone from a tiny dot in the ocean would show up at my table?" Demers, 53, asked herself that winter day. "I decided to start keeping track to see where people come from."

She hung a laminated map of the world on the wall. It now has 126 red dots on it, each one indicating the country of origin of a student who visited one of the three tutoring centers that make up the Center for Academic Program Support at Holyoke Community College – the Writing Center, Math Center and Tutoring Center.

Since Demers started taking notice, CAPS, as it is more commonly called, has served students from nearly two-thirds of the countries in the world. She happens to know that among those still missing are French Guiana and Uruguay, in South America.

Demers, who lives in Chicopee, studied liberal arts at HCC before transferring to Mount Holyoke College for her bachelor's degree in English literature. She also has a master's degree in education from Ashford University in San Diego. Over the years, she has worked for Mass Relay, a service for people who are deaf or hard of hearing; she's taught summer ESL classes at the Williston Northampton School, and she's been a tutor at HCC since she was a student here, now working about 20 hours per week.

"I love this job," said Demers. "I get to sit in the same chair and talk to people from 126 different countries. I learn a lot from these students. I don't travel, so I learn all manner of things I'm never going to see."

HCC employs some 70 part-time tutors in CAPS. About 25 percent of them are alumni like Demers. Many of them took advantage of tutoring services while they were students, says CAPS director Andrew Fletcher, and then sought work there as peer tutors and later as professional tutors as they continued on to earn advanced academic degrees at nearby institutions.

"The heart of what we do is serve students and help them on their trajectory," he  said.

Tutors are key to that, and while they may each have their personal reasons for staying on, they all seem to enjoy the work.

"I really like to help people, and I get to work on a variety of subjects," said tutor Andrea Graziano '14 (biology) of Agawam who works in the Tutoring Center, where she primarily assists students with science and math.

Graziano, 23, earned her bachelor's degree in biology and minor in chemistry at Bay Path University in 2016 and works for the Opportunity Academy, an alternative high school within the Holyoke Public Schools and leads MCAS prep workshops, in addition to her CAPS position.

"This is a really good job," said Graziano, who is considering graduate school. "It keeps me active in my subjects. I get to meet a lot of people and still say current in all my material."

At any given moment, there may be half a dozen or more HCC alumni working with students in in the three CAPS centers. On one particularly busy morning last May, Demers was seated at her usual table facing the Writing Center entrance. Andrew Morse '12 (communications) was at the next table and Emily Burns '16 (liberal studies) at the next.

"I continue to work at the Writing Center because I highly value the work that we do," said Andrew Morse '12 of Easthampton. "Many of our students face rigorous challenges and responsibilities both inside and outside of school, so to me it feels good to be in a position where I can offer students both encouragement and help in refining their academic skills."

"I can also speak from both sides to the value of academic support," said Morse, a first-generation college student who went on to earn his bachelor's degree at UMass."Without support services that were available to me when I was a student, I may not have stayed in school."

Meanwhile, in the adjoining Tutoring Center, Graziano was helping a student with biology while Gwen Whitehurst '96 worked with a student in a private room there. Not far away, in the Math Center, Ludmila Tsikhotskiy '11 waited as a student she was working with reviewed an assignment.

Tsikhotskiy, 34, came to the U.S. from Ukraine in 1999 when she was 16, earned her associate degree from HCC in liberal arts and science and now works as a pharmacy technician in addition to the eight hours a week she puts in at the Math Center.

Tsikhotskiy said some of her older students may not have been exposed to math for 15 years; they come to HCC, take a refresher course and she works them on basic math principles. Some days, she works with students on more advanced subjects, such as statistics.

"It's a lot of inspiration," she said. "People are not giving up."

CAPS records more than 17,000 contact hours annually, according to Fletcher. The mood and pace discernably shift as each semester progresses. "There is anxiety at crunch time with exams and papers due," he said. "Students are dependent on getting a good grade. There is also a lot of energy and cross-pollination. Students learn from each other. We have a lot of nice dynamics here. It's pretty powerful."

In this mini-melting pot at HCC, all students benefit.

"It lends to the educational mix," Fletcher said.

Key to CAPS' success is the tutoring staff. Roughly 15 are classified as "Peer I" tutors, current HCC students recommended by faculty. Another 15 are "Peer II" tutors, alumni and others who have their associate degrees. Most, though, about 40, are "Professional" tutors - alumni, adjunct faculty members or retired educators who hold a bachelor's degree, master's or PhD.

"Some people have gone through the whole cycle," said Fletcher, "like Kim."

Burns, who lives in Belchertown, started as a Peer I tutor while she was an HCC student, advanced to a Peer II tutor while she was studying neurobiology and psychology at Bay Path University. Now, with her bachelor's degree, she plans to stay on as a Professional tutor.

"Having the opportunity to work as a student with other students has been the most meaningful experience to me because I've had the opportunity to encourage and understand what others are going through in their college experience," Burns said. "I've gained a whole other perspective of what college is like."

On that same morning in May, Demers was helping an adult student from Iraq. He had first enrolled at HCC to learn English and is now working toward his associate degree. He asked Demers to review a paper he'd written.

Pen in hand, she scanned the report, making light edits here and there. She questioned him on one word. Together they chose another and she told him he had done a nice job.

She believes in the mission - that students who visit CAPS perform much better in their classes than students who do not.

"I think we're helping," she said.