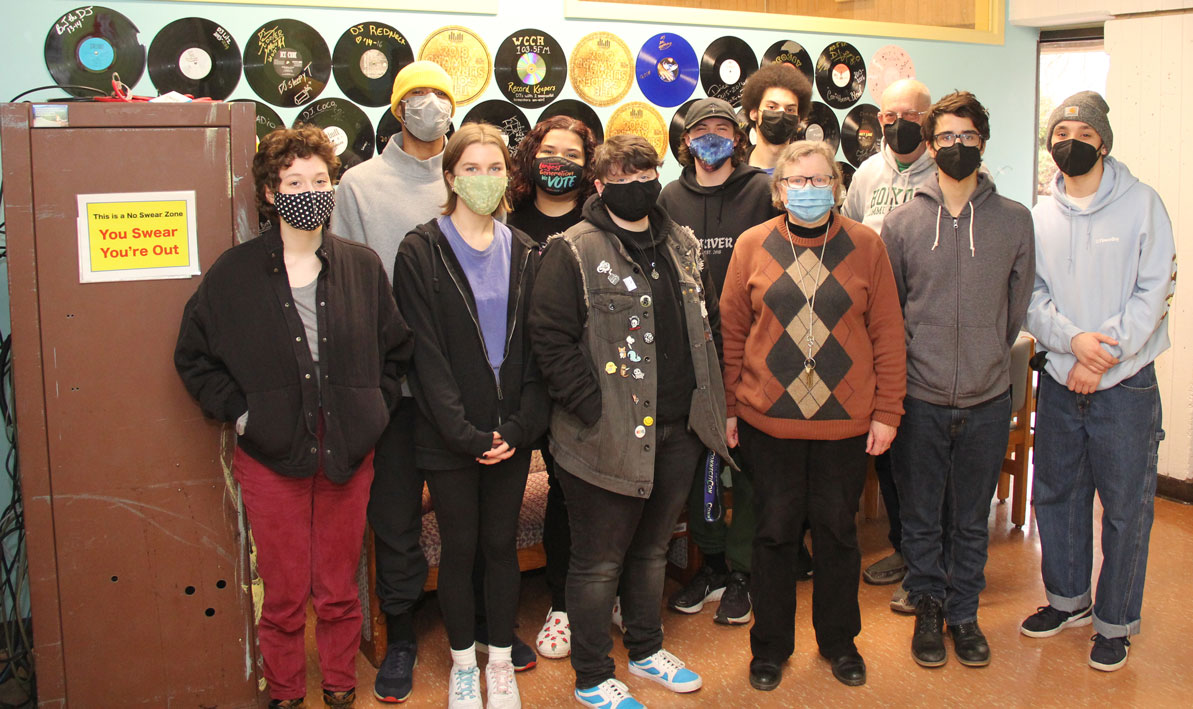 The day Russia invaded, the emergency call went out to college radio stations around the world.

"We are emailing you to please ask for your support and solidarity for the people of Ukraine, and especially the students in the country," said the Feb. 24 message from the College Radio Foundation, a New Jersey-based nonprofit. "We need your urgent participation! We have only a limited window of time."

Over the next 24 hours, representatives from some 50 college stations on three continents responded the best way they knew – by recording their own voices. The College Radio Foundation compiled the audio clips into a 37-minute file that was sent to OstRadio at National University Ostroh Academy in Ostroh, Ukraine, west of Kyiv, the capital.

"We are the students from 103.5 WCCH in Holyoke, a city in western Massachusetts in the U.S.A. We stand with you in Ostroh and all across Ukraine. Please know we are in solidarity with the Ukrainian people, and we wish you safety, unity, and eventual peace for you and your homeland."

The soothing voice on the WCCH clip belongs to Stevie Converse, an adjunct professor of communications at HCC and adviser to the HCC Radio Club. Converse sent the message on behalf of the club and the station.

"We only had 24 hours, and by the time I saw the email we were at hour 19," said Converse. "It was the day of the snowstorm, and the college was closed, so I put the word out to our station students to approve sending a message. We were the only station in Massachusetts to participate. It was just something we could do, and I thought it was important for WCCH to take part."

The audio compilation was posted online on SoundCloud and broadcast on STUD Radio in Lviv, which sent it to universities throughout Ukraine.

Listen to the message on SoundCloud ...

"STUD Radio was able to share the audio content far and wide," said a follow-up message from the College Radio Foundation.

But that wasn't the end of it.

A few days later, STUD Radio coordinated a response to the world from Ukrainian students involved in college radio. About a dozen students sent audio clips of their own, recorded on their cell phones as they were sheltering from the war.

"Hi, I'm from Lviv, and I need your help, wherever you are," said one young woman. "I love my city, my country, and will never give it away to anyone. I beg you, support Ukrainians. Get out on the streets and don't be afraid to say the truth out loud. Together we will stop this horror."

Other students responded from Kyiv, Donetsk, Prymorsk, Nadvirna, and other cities.

"I'm from Chernobyl, and my brave, free country is dying," said another woman. "I ask you ...  please, act. Go to the rallies. If you can, donate money. Spread the real information. Just don't be silent."

WCCH started playing the "message to the world" from the Ukrainian students on the air. Last week, the College Radio Foundation organized a coordinated response, asking stations to play the message for an hour on Thursday, March 10, starting at 10 a.m. E.S.T. as a show of solidarity.

Listen to the Ukraine students' message to the world ...

"We always talk about how college radio is a community," said HCC student Trystan Lajoie of Agawam, a member of the radio club and a WCCH DJ. "We have a tight-knit community here, but worldwide college radio is an even bigger community. And now, because of this war, there's a hole in this community. It's one of those things where we can't do much, but we have to do all we can to help and just do everything we can to make sure these people are OK, even if it's just sending messages and hearing back from them, knowing that they are alive, and they are safe."

On Wed., March 9, at the beginning of their bi-weekly club meeting, HCC students listened to the pleas from their radio peers half a world away, some hearing the recording for the first time.

"It might be a small thing, but at least it's something for them to know they're not alone," said  Alannah Brunt of Springfield. "There might not be much we can do, but listening is the best first step into actually taking action."

Club members noted that such an exchange of messages worldwide would not have been possible without the Internet, email, cell phones and other technology available today.

"It's one thing see it on the news and see the devastation through pictures," said Converse. "But to hear their voices was just, I mean, I can cry thinking about it. That's the power of audio. It's important to understand through our ears, so we can get it into our hearts. And for them to be able to hear our voices – it's different than reading. It's different to hear somebody tell you, we're behind you. We are praying for you. We will do everything we can to help you."

On March 4, STUD Radio and the College Radio Foundation distributed a second message to the world from college radio students in Ukraine, this one in multiple languages.

"In extremely challenging circumstances, the students in Ukraine have put together an audio update for us," wrote Rob Quicke, founder of the College Radio Foundation. "We were told that we would probably not hear from the students again, as the situation in Ukraine is dire, so we are grateful to hear from them. Have a listen."

Update from students of Ukraine (multilingual) ...

Links to all the recordings can also be found on the College Radio Foundation website: collegeradio.org

STORY and PHOTOS by CHRIS YURKO: (Thumbnail) HCC student DJ Grace Kelly of Springfield gets ready for her noon-time show on WCCH 103.5 FM. (Above) The HCC Radio Club gathers Wed., March 9, for their bi-weekly Wednesday meeting.