'Paint What You Feel' 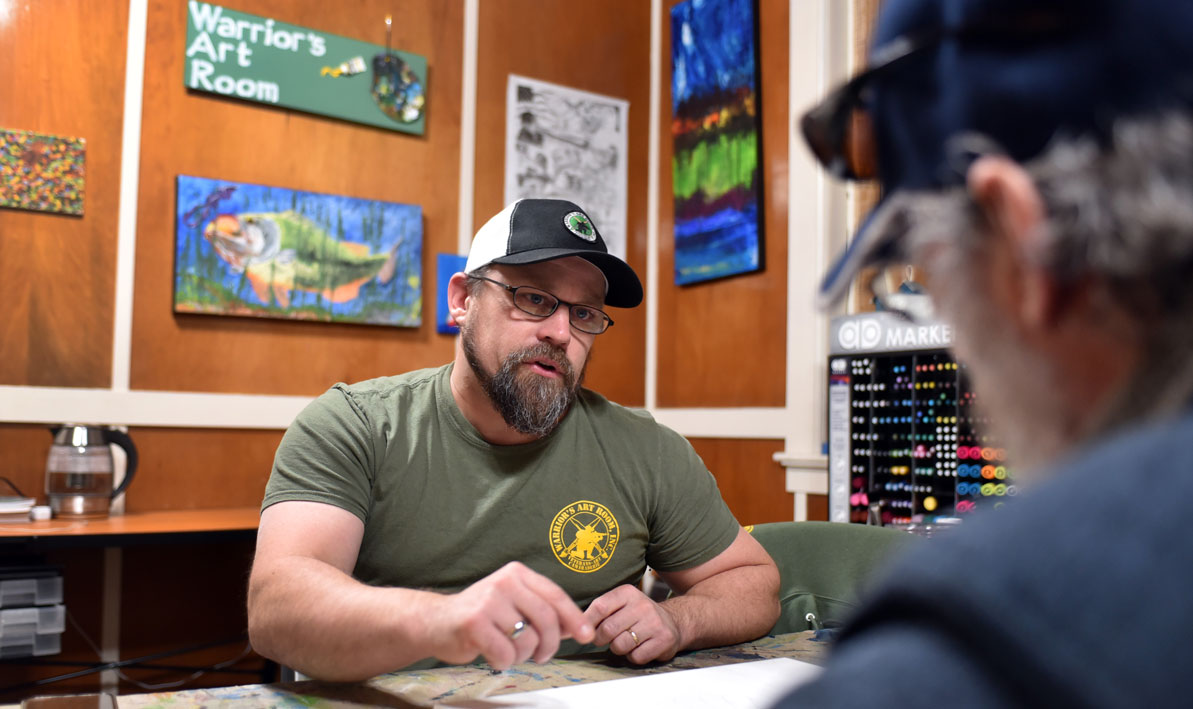 WESTFIELD – Three years after completing an eight-year stint in the U.S. Marine Corps Reserve, Iraq war veteran Steve Jones began to experience bouts of sadness, helplessness and depression so severe he knew something was wrong. Until then, he thought he'd adjusted to his years of combat service with no lasting effects.

In other words, the married, 46-year-old father of four now says, "I thought I was perfectly fine."

But, of course, he was not. Though a naturally upbeat and positive person, intrusive thoughts and sleep-stealing dreams eventually took their toll. Deeply affected when friends he'd served with became suicidal or died by suicide, he grew concerned about his own mental health. It was like he had "started experiencing PTSD out of the blue," he remembers.

And that's when he took action. In 2012, he enrolled at Holyoke Community College to study psychology, eventually earning his associate degree with high honors. "I wanted to figure out what was wrong with me, but I also wanted to help my fellow veterans."

His time at HCC would lead him to discover both a passion and a talent for art that would ultimately help him heal his post-traumatic stress and put him on a path toward helping other veterans experiencing the after-effects of military service.

Jones, an Easthampton native who graduated from Smith Vocational High School in Northampton, had always wanted to join the military. He finally did at the age of 28, signing up for the U.S. Marine Corp Reserve so he would be stationed close to his home and family in Russell. He appeared for his physical exam on Sept. 11, 2001, the day terrorists attacked the United States. The next day, Jones was sworn in.

In 2004, his unit deployed to Iraq, where Jones served in airborne control and command in support of troop operations, directing resupply missions as well as medical and casualty evacuations, rising to the rank of sergeant. The job involved long hours taking calls from soldiers in mortal danger, coordinating troop evacuations and air strikes. Lives depended on him.

"It's not the people that you save," says Jones. "It's the people you don't save that wake you up at night."

Years later, to fulfill a humanities requirement for his HCC degree, Jones took a painting class with artist and former HCC instructor Dean Nimmer. He had a breakthrough when Nimmer asked students to paint their feelings and emotions. Without consciously intending to, Jones painted a picture that depicted his first casualty evacuation in Iraq in 2004.

"It was crazy," he says. "Almost immediately, I felt like that weight was lifted off me."

He hadn't even realized that incident was eating away at him so many years later.  At HCC, he met other student-veterans who'd had similar experiences. He resolved then to find a way to work with veterans to make art that heals the invisible wounds from war.

From her own vantage point, his wife, Brenda, a 2018 graduate of HCC's registered nursing program, watched her husband's post-traumatic stress emerge after he returned from Iraq. He was having trouble sleeping and suffered nightmares. Around the anniversary of the second battle of Fallujah (fought in late 2004) – a happy time when they were celebrating a family birthday – she noticed her husband seemed uncharacteristically depressed, aggravated and frustrated.

When Steve came home with the painting he'd made in Dean Nimmer's class, it all began to make sense. She'd always known her husband had undertaken intense work in Iraq. If not putting him in immediate physical danger, the job was high stress – and extremely high stakes. But once he was home, she began to fully grasp the depth of his trauma, loss and emotion.

"I'm sure it will take his lifetime to be able to process that," says Brenda.  She studied the painting, which shows one soldier walking, carrying another clearly injured soldier, and found it particularly moving. A close look shows the injured soldier nearly eclipsing the one carrying him, who represents Jones.

"I said, 'Wow, Steve, this is pretty intense.' You could see the pain was there on the paper," Brenda recalls. "To me, that one is really powerful because it represents what Steve did and how it made him feel."

During Steve's deployment, Brenda had felt her own stress at home. She had to maintain a firm foundation for their four children, while also protecting them from her own fears about their father's safety. Right around the time he was expected to return from Iraq, in January 2005, she learned there were multiple casualties when a helicopter went down in the area where Steve was stationed.

"I remember going down into my basement and bawling my eyes out. I didn't know if he was in it or not. That was really hard because it was so close to him coming home," she says.

When she found out Steve was okay, she felt great relief - but that was a complicated reaction, too. "Then I felt guilty because it's somebody's family."

As Steve began talking about opening a place where veterans could make art, he had her own ideas. "You know what?" she told him. "You have to do this for the families, too."

Steve agreed. "It's very important that both the veterans and their families are able to come," she says. "There are different struggles that the spouse goes through, and this creates a place where they can come together."

In February 2016, Jones quit his longtime job as a receiving manager at C&S Wholesale Grocers in Hatfield to work on opening an art studio for veterans and their families. By June, he and Brenda had created a nonprofit and opened the Warrior's Art Room one day a week in a single, small room rented from the Westfield Alliance Church.

Last summer, they relocated the Warrior's Art Room to a larger space in an old mill building in Westfield that allowed them to expand operations to five days a week.

An invitation to create

It's the day after a December blizzard prompted multiple cancellations and left snow-encrusted streets, a week before Christmas at the Warrior's Art Room. Steve Jones steps away from a painting on an easel to greet a visitor. With a beard, moustache and deep dimples that flash frequently, he's dressed in a baseball cap and green T-shirt bearing the Warrior's Art Room logo on the front and these words on the back: "When those who are trained in WARFARE create ART: Good things can happen."

Retired college professor Barry Sponder, a Vietnam War veteran, is working on a sketch using a grid to copy a picture from his phone. Jones offers gentle encouragement and concise instructions.  The room has three tables, one easel and a multitude of art supplies – markers, boxes of paints and various types of paper. Paintings, many with military themes, cover the walls. Brightly painted rocks decorate the window sills.

Jones surveys the scene, arms crossed at his chest. He revels in describing the inspiration behind the Warrior's Art Room and his desire to help others paint what they feel while also building their skills to make meaningful art.

He points to the picture of a Naja Buddha sculpture on Sponder's phone and then to his drawing. "Remember, you're just making a sketch," he says. "You're blocking it in and then you're going to come back and fuss over the details."

Sponder, 73, with a white beard, wire-rimmed glasses and a baseball cap, focuses intently on the sketch on the table before him, taking in the advice. The sculpture in the picture is in a park in Kathmandu Sponder recently visited. "I always take pictures of things I might paint later," he says.

"Just go fast," says Jones. "Lots of lines and fast because you're going to erase the lines that don't matter."

"For me, it's really about the process of creating art," Jones explains later. "It's not what the final outcome is."

Sponder has been visiting the art room almost weekly for about a year, one of some 800 people Steve and Brenda have worked with to date. Some spend time in the studio. Others have their art experiences brought to them.

Art supplies in tow, the couple travels to jails in Ludlow and Billerica on Fridays when the art room is closed to offer lessons to incarcerated veterans. They also work with veterans organizations, such as the Holyoke Soldiers' Home, the West Springfield Veterans Center, and Project New Hope in Worcester.

Despite skill level, aptitude or experience, Jones believes most people can find healing by making art. He is clear that what he offers is not therapy, but, rather, an opportunity to understand a traumatic experience in a safe, non-judgmental environment.

"Their pieces tell their stories," he says.

Jones takes no salary as the Warrior's Art Room director. He earns a modest paycheck teaching art one day a week at the Community Christian School in Granville, Mass., and will be completing his bachelor's degree in human services this summer at Cambridge College while Brenda completes her bachelor's degree in nursing at Westfield State. They make do primarily on Brenda's salary as a neonatal intensive care nurse at Baystate Medical Center.

The art room is supported entirely by donations, such as those from Leeds-based Chartpak Inc., a producer of art supplies. If they ever raise enough that he could take a salary, Jones says he'd prefer to use the money to open a satellite center.

"I'm doing what I love and helping other veterans," he says. "I'm enabling others to become passionate about creating art."

As Sponder labors over his piece, the center's door opens, and in walks Brandon Kowal, a 16-year-old from Westfield. Kowal pulls out a painting he's been working on during weekly visits, inspired by one he likes that hangs on the wood-paneled wall: a cross draped with a flag, military dog tags dangling, army boots at the bottom.

"I like to do art. It's calming," says Kowal, who attends a vocational school in West Springfield, where he's learning the automotive trade. "It's a place where I can go to take my mind off everything else in the world."

Kowal's parents are both veterans. Soon his mother, Melanie Casineau, enters the studio, here today to make Christmas cards. "It's comfortable," says Casineau, who spent 20 years as a photojournalist in the U.S. Air Force. "I like coming here because you have something in common. When you're with someone from the military, you're not with a stranger."

Sponder says he, too, is drawn by the camaraderie. "Everyone who comes here has a bond, knowing you could have died," he says. "There's a basic respect for what we all went through."

His own growth has meant reclaiming a passion he hadn't pursued in 40 years. "It wouldn't have been possible if I hadn't been here" receiving guidance from Jones, he says. "He encourages you to paint what you feel."

That life-changing lesson, something Jones learned in his first art class at HCC, is a gift he is determined to pass along.