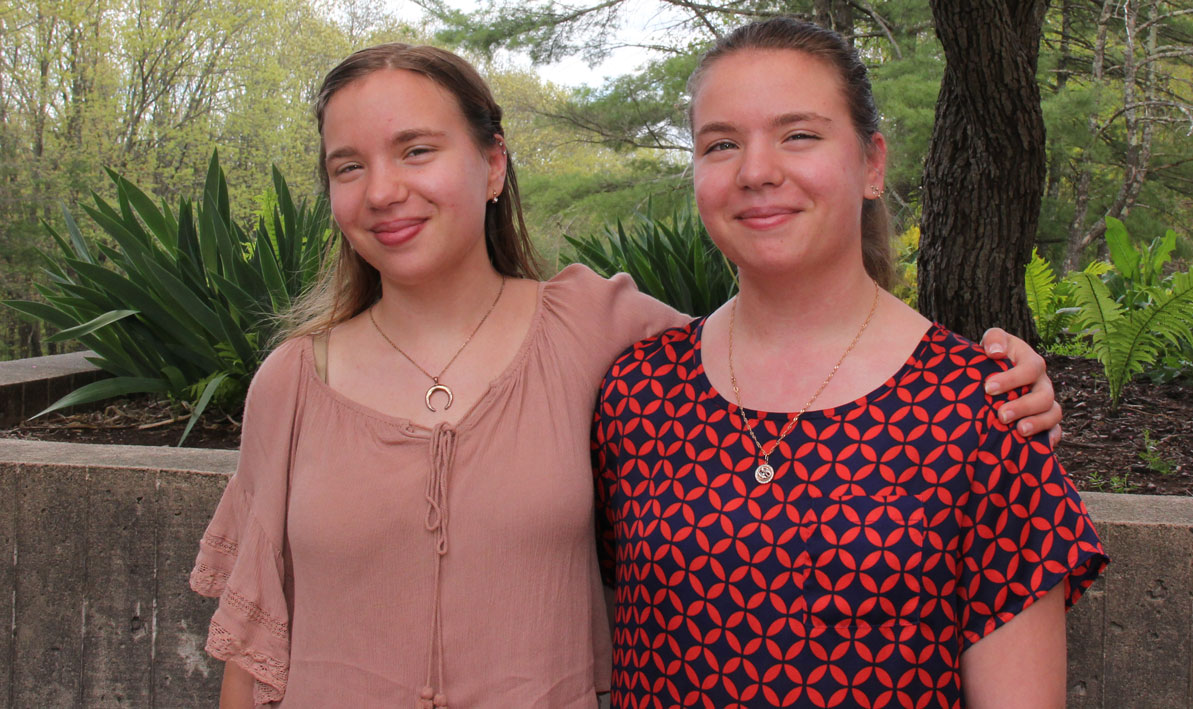 Alina and Anastasia Antropova may be identical but they are not entirely alike.

Despite their DNA, Alina writes left-handed; Anastasia is a righty.

Alina is an English major at Holyoke Community College, Anastasia a chemistry major.

Alina belongs to the HCC Writing Club and is editor of Pulp City, the college literary magazine. Anastasia is a STEM Scholar and vice president of the HCC STEM Club.

Long term, Alina hopes to become an immigration attorney; Anastasia wants to be a scientist. "

It's kind of funny because when we were kids we were very similar," said Alina. "We had the same interests. We did everything together. We both played clarinet in middle school. But when we hit high school, we started to differentiate. It's been really interesting to see how that's played out so far."

Well, so far, the 19-year-old wonder twins from Southwick have been recognized with multiple honors, scholarships, and awards for achievement in their respective disciplines. During their two years at HCC, they each maintained a perfect 4.0 GPA. For that, they have earned the title of valedictorian as they graduate from HCC June 4 as members of the class of 2022.

"It's been an amazing experience," said Anastasia. "We graduated from high school in the middle of the pandemic. Everything was virtual. Nobody knew what was going to happen. We decided to try HCC for a semester, and then we loved it, so we stayed."

Growing up, Anastasia had initially wanted to be a doctor. An AP chemistry class her sophomore year set her on a different path.

"I just fell in love with it," she said. "I thought chemistry was the coolest science ever. I find it so fascinating how we have gotten to a point where we can understand very deep things about the universe that we can't even see. It's like a magical experience to know this hidden world."

At HCC, Anastasia developed a focus on sustainable chemistry – environmentally friendly processes that are less toxic and produce less waste. Her final semester included an independent research project in which she used a microwave oven to synthesize aspirin without a catalyst. She presented her paper, "Give it the green light: evaluating microwave synthesis of aspirin for environmental impact," at the spring 2022 UMass Undergraduate Research Conference.

Alina's first love is writing – creative, nonfiction, academic. Her poetry has been published in Pulp City. She took first place in 2022 in the HCC Library's research competition for her paper she wrote for Spanish 201 class, "Exploring the Connections in the Magical, Diasporic, Caribbean, Female Coming-of-age Novel." An essay she wrote based on research she conducted on the cost of college textbooks earned her a weekend trip to New York City where she received the Phi Theta Kappa New Century Transfer Scholarship.

Of course, she brought along Anastasia – "my plus one" – as her guest.

During their two years at HCC, they took only one class together. (That was macroeconomics during their final semester.) Although they did help each other out quite a bit along the way as study partners in their other subjects.

"She's my better reader for all my papers," Alina said of her sister. "I'm not that useful for her chemistry stuff, but I'll quiz her on her flashcards, although I don't understand what I'm reading."

"I feel bad," said Anastasia, "because I'll make these gigantic stacks of flashcards and it'll be like midnight and I'll say, you gotta help me study, and she she's like, no, I want to go to sleep, and I'm like, no, not cool."

They both work as peer tutors at HCC, Alina in the Writing Center, Anastasia in the Tutoring Center. Their work there is also held in high regard. In May, they each received the 2022 Center for Academic Support Award for Tutorial Excellence.

"We're so different in the way that we see the world and how we approach problems, and even the way we think of solutions," said Alina. "But the fact that we can work together on things I think makes us really successful. We're a complementary team in that sense."

This summer, their paths will briefly diverge as they embark on separate career-oriented experiences: Alina heads to a refugee welcome center in Albany, N.Y., where she'll be working with AmeriCorps on college access programs. Anastasia landed a National Science Foundation research internship at the University of Cincinnati, where she will be working on sustainable chemistry.

In September, they will reconvene at the University of Massachusetts in Amherst, where Anastasia will study chemistry and Alina English and social thought and political economy.

They are unlikely to have a class together again although they do plan to share a dorm room. They already know how well they get along.

"We won't have to pre-vet our roommates," said Anastasia. "I think it's a special thing being a twin. You kind of have a built-in number one person, like she'd be my phone call if I was ever in jail."