"I can name you a laundry list of professors that I felt were very inspiring. I think just how good the faculty is here, from my experience, set me up for success. I'm a strong advocate of community college because of it." 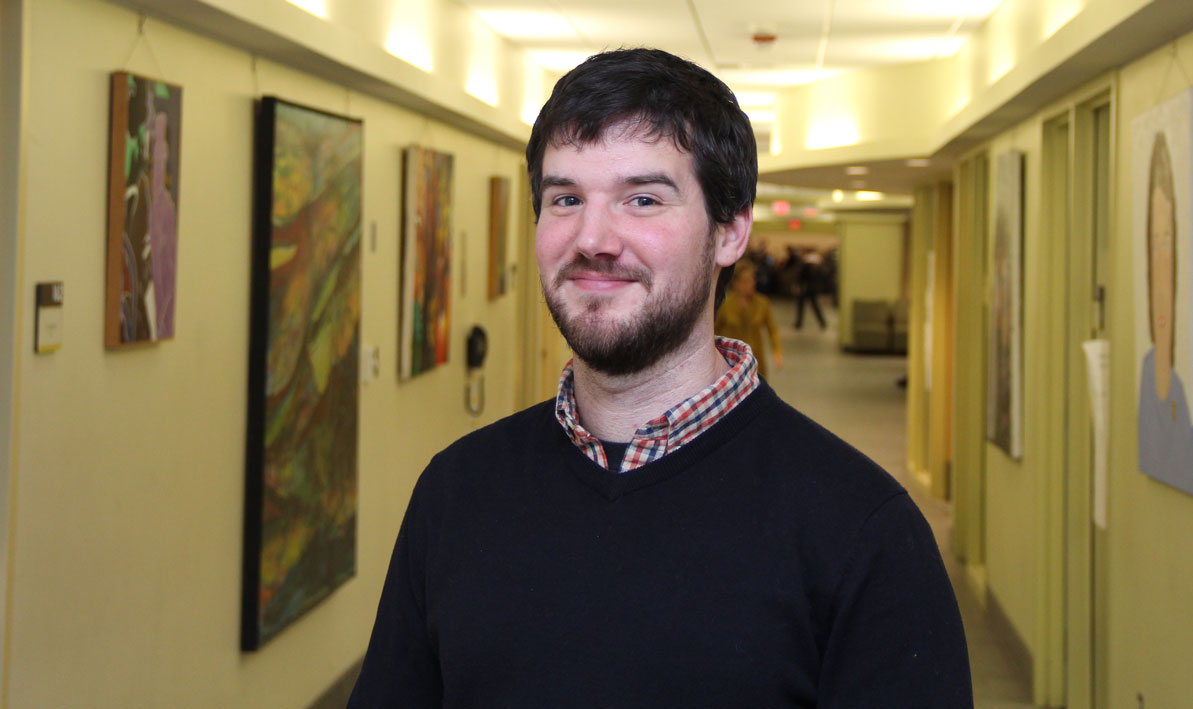 Arthur Pero earned his associate degree after the Fall 2016 semester. He is now at Amherst College, working on his bachelor's degree in English. He shared some reflections on his time at HCC before he transferred for the start of the Spring 2017 semester.

"I worked full time outside of school, at Starbucks in Westfield,  35-40 hours a week. It was hard but manageable. I found a pretty good balance."

"My favorite teacher is gonna go hands down to Fred Cooksey. I had a few classes with him, but I'd say Honors English 102 was my favorite 'cause it was focused on dystopian fiction and that was something I'd always really been interested in. And then I had journalism with him, and he mentored me for my Honors colloquium, "The Persistence of Reality." He mentored my Honors project, but Jim Dutcher and Ileana Vasu taught it. That was great. Jim is an English teacher. Ileana is a math teacher but there were a lot of different disciplines in that class: math, English, physics, you name it. We looked at the nature of reality and the concept of reality, human perception and even ecology. We looked at reality through a bunch of different lenses. That was really cool. That was a good one."

What led you to HCC?

"I didn't do well in high school. Mostly D's and F's. I dropped out my senior year and then I did end up going back, and I did graduate. It took me like five years and even then it was like a sympathy kind of graduation.  I think the teachers felt bad. I was 19. Then I went to STCC, took a few classes. Still wasn't really interested, so I took some time off. I was away from school for about five years. I kind of found my personal interests started going more in the direction of academic reading, philosophy, and dystopian fiction. Rather than just watching TV and hanging out and stuff, I would read and watch philosophy videos online. I was working two jobs at the time, wasn't making much money. I worked in a liquor store and I worked at Starbucks too so I kind of dealt with both ends of the drink spectrum. working maybe 55-60 hours a week. I decided to drop my second job and start school. HCC was close, so I decided I would come here and study English and philosophy, mostly cause that's what I'm interested in. It ended up going really well."

"I like creative writing. I found myself pretty good at academic writing, so the more that went on the more I was able to hone my own writing style. I like literature. I like film. Analyzing stories is really cool to me."

What's been your most meaningful experience at HCC?

"One thing that's popping out, and Alex Wagman did it first, and I've had several professors do it since, is a teacher using a paper I've submitted and asking me if they can use it to show other students as a model for how to write a college paper. I found that very flattering and kind of reinforced that I can do really well and that I should continue doing this."

What is your favorite thing about HCC?

"I think I lucked out with professors. I can name you a laundry list of professors that I felt were very inspiring: Alex Wagman (English), Fred Cooksey (English), Jim Dutcher (English), Ileana Vasu (Math), Mark Clinton (Political Science), Don Hanover (Philosophy), Kate Maiolatesi (Sustainability). I think just how good the faculty is here, from my experience, set me up for success. If they didn't care and they didn't try to encourage me I probably wouldn't have tried as hard cause I knew they thought I was good, and I didn't want to let them down, so I really tried hard and I wanted to do well by them. So I found it really inspiring. I know it sounds corny but just like how awesome some of the teachers are here is what did it for me. I'm a strong advocate of community college because of it."

What's the most important thing you learned at HCC?

"I never thought I'd be able to take an Honors class. English 102 was the first one I took, and it was the beginning of a long trend of me pushing myself to take harder classes. I took "Politics of Food," the Honors LC with Don Hanover an Kate Maiolatesi. I also took "Ideas That Changed the World," the UMass Honors course through the UMass Commonwealth Honors College. I took the Honors Colloquium and the "Immigrant City" LC with Mark Clinton in partnership with Amherst College. So I would up with something like 26 Honors credits. Like I said, I hadn't done well in school before, but then I found myself really capable, and I just wanted to see how far I could push it, and then I found that the LCs and Honors classes were more interesting anyway."

Why is education important to you?

"It reinforces the things that I've kind of known are true and helps me question what I think I know. Everybody thinks they're right about most things and that their opinion is the way things should be. Education puts in perspective that you are not always right. The more opinions you have that get challenged the better off you are cause you can see where you were wrong and where you were right and kind of develop yourself as a person based on that."

What are your career plans?

"At the moment my hope is to be a college professor, if I can pull that off. And again, I have been genuinely influenced by the faculty at HCC."