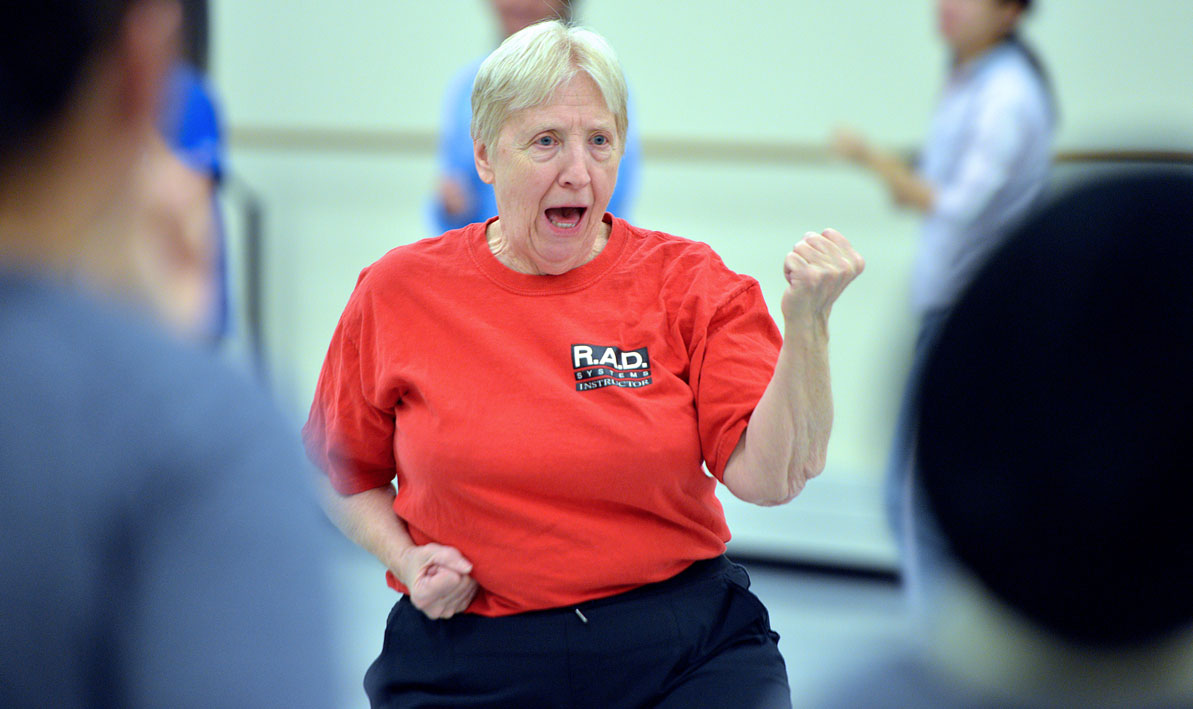 Like most of her classmates in HCC's Criminal Justice program, Barbara Arrighi, '74, didn't understand then how a speech and theater course could help her realize her dream of becoming a police officer.

"Everybody hated the idea of being in that class, but when we went, everyone loved it," she said, recalling her teacher, Jeanne Hatch. "I learned a lot in that class: how to present an argument, advocate a position, educate, and get your audience's attention."

"When you do anything having to do with your job you use your voice to command presence," she added. "It was fun and empowering and helped me with everything I did."

Everything included rising in the ranks of her karate organization and in the Mount Holyoke College campus police department, where she is now the deputy chief and overseeing the campus. Arrighi is an 8th degree black belt in a traditional Japanese style of karate called Shito-Ryu, and a hanshi — teacher of masters — making her the highest ranking woman in the world in her organization, the International Karate Do Kai. At Mount Holyoke, she directs Bushido-Kai Karate, the college karate club - leading weekly training sessions year-round at Kendall Hall. She also holds a fifth-degree black belt in Gosoku-Ryu, another Japanese style of karate, and teaches self-defense classes for women called Rape Aggression Defense (RAD), both at the college and at conferences around the country.

Knowing she wanted to go into police work, the Easthampton native started taking karate classes in her 20s at the old Henry Jay's Health Club and School of Karate in Holyoke.

"I fell in love with the art and was amazed at the discipline and the camaraderie," she said. "It's the art of fighting without fighting, because you know when to walk away."

When she arrived at HCC in 1972, she was already a yellow belt with a black stripe. At the time, she said, she chose HCC because it had "the premiere program in the valley" for criminal justice. She credits her rise in the
police ranks to the solid foundation she received there. She recalls the late West Springfield police chief Thomas McNamara as an especially strong role model along with the other law enforcement professionals who taught courses at the college.

Back then, she said, women were in the minority in her classes at HCC, but she didn't feel like she needed to prove herself because she was a good student and often helped others.

"But once I was in the field, both in karate and police work, I felt it," she recalled. "I was lucky I worked with quality male instructors all my life, and, because of that, I became a strong instructor and therefore respected. But it was always in the back of my mind that I needed to be better to get the respect."

The 70-year-old Arrighi, who lives in Northampton with her partner, Marla Allisan, said her interest in police work stemmed from talking to the officers who frequented Arrighi's, her parents' restaurant in Easthampton.

"They were interesting, and I wanted to be on my feet and in the action," she said. "I wanted to directly help people and not be off to the side."

When she started working as a campus security officer at Mount Holyoke in 1974, she was the first woman hired in that position. She graduated from the Massachusetts State Police Academy in 1980. Later, as a supervisor, she earned her bachelor's degree in police administration from the University of Massachusetts.

After 42 years, she clearly recalls the reason she initially applied for the job at Mount Holyoke. "I liked the idea of helping women in their lives," she said.