There will be no Covid testing on Saturday, January 15, and Monday, January 17 due to the forecasted weather. Important Covid-19 vaccination policy update 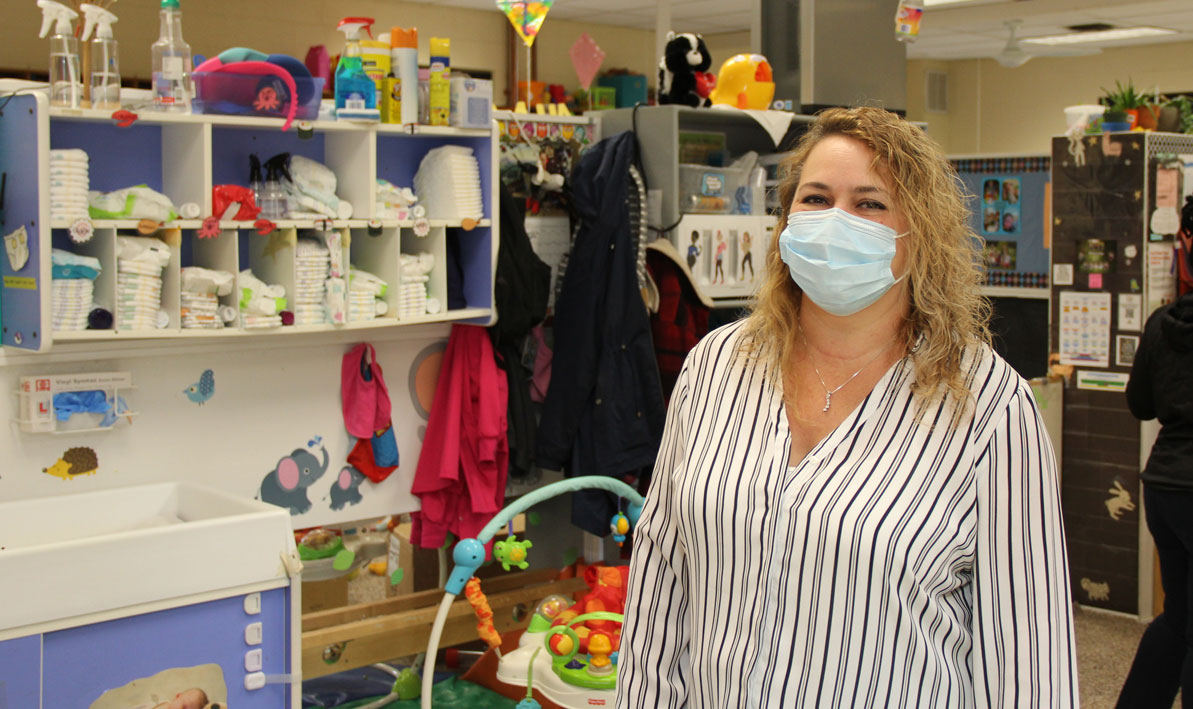 When Bobbi Rougeau received the scholarships that enabled her to attend Holyoke Community College, she was sure of one thing: "Some day I'm going to pay it forward."

She just was not sure when that might be.

In 2004, her first year in HCC's Early Childhood Education program, Rougeau was already operating a family childcare center out of her Granby home, attending classes at night and caring for twin girls born in 1998. That year she received the Kathryn "Kitty" Broman Scholarship through the HCC Foundation.

The Elaine Marieb New Directions Scholarship saw her through her second year, when she was taking a full course load and also renovating the building that would become a new standalone childcare facility. Two months after getting her associate degree in 2006, she opened the Alphabet Soup Childcare Center for infants on West State Street in Granby.

Now, despite the upheaval of the pandemic, she said the time is right to make good on her pledge. Rougeau has committed $16,000 to endow an annual scholarship for students enrolled in HCC's Early Childhood Education program.

"Bobbi is creating opportunities for future generations of HCC students just like someone had done for her, and that makes the Alphabet Soup Scholarship even more special," said Amanda E. Sbriscia, vice president of Institutional Advancement and executive director of the HCC Foundation. "The Alphabet Soup Scholarship will create opportunities for HCC's Early Childhood Education students to pursue their passion. Bobbi's generosity will help break down the financial barriers students often face achieving their degrees."

Rougeau faced this kind of barrier herself. Her mother was an office assistant, her father was not in the picture, "and I honestly would not have been able to afford to get that degree on my own," she said.

As long as she can remember, Rougeau wanted not only to be a teacher but also to own her own childcare center. She started in the field at 16, working as an assistant teacher at the Belchertown Day School, where she later became certified as a lead teacher. Her HCC courses, including psychology, curriculum development, and introduction to teaching students with exceptional learning needs, "brought awareness to things you don't think about as a young teacher," she said.

In 2016, marking the 10th anniversary of the opening of Alphabet Soup, Rougeau wrote a letter to HCC benefactor and retired professor Elaine Marieb.

"I was able to achieve my goal of an associate degree at the completion of that final semester thanks to your scholarship," Rougeau wrote. "You will be proud to know that I worked very hard in an effort to prove my worth as a recipient. I graduated with high honors and as a member of Phi Theta Kappa ... I know there are many others who would love nothing more than to attend college but find themselves in the same financial predicament. I had always wanted to pay it forward and make a difference in the same way you did for me. "

Rougeau started by caring for a maximum of eight children in her family child care and now enrolls 105 children through kindergarten age in three locations, her original site and Alphabet Soup Preschool Plus in South Hadley and Granby. Her husband Jim, a truck driver, is "the maintenance guy," and daughters Casey and Cameron, now 22, are teachers.

Rougeau donated money for a partial scholarship in 2015 for one student, but due to financial concerns was unable to commit the full amount. Now, however, she said she has given almost half and hopes to fully fund the rest within a year.

She had to shut down on March 19, 2020, following Gov. Charlie Baker's order that all early childhood education programs close as part of his emergency actions to slow the spread of COVID-19. When she heard the news, she stayed up until four in the morning filing the paperwork to participate in the state's Emergency Childcare Program and reopened "as if starting from scratch" three days later.

"We needed to help the families that had nowhere else to go," she said. "We served so many essential workers, it was heartwarming to be able to do it."

Sean and Grace LaValley, both nurses at Baystate Health, used the emergency program for their daughter, Maeve, when their regular preschool closed.

"I was deployed to a COVID-plus unit and was under an immense amount of stress," said Sean LaValley. "Alphabet Soup was able to accept our little one into the emergency program. I am so very thankful for their support during that daunting time. Knowing that my little one was under the care of the magnificent staff at Alphabet Soup made venturing into that unpredictable work environment every day that much easier."

Childcare centers were allowed to reopen on June 29 under strict new guidelines. Rougeau said she was happy to go back to offering more options for parents.

Kitty Broman and Elaine Marieb would both be proud.

The deadline to apply for an HCC Foundation scholarship for the 2021-2022 academic year is Friday, April 16. More than $245,000 in awards is available for incoming, continuing and transferring HCC students. Apply at hcc.edu/scholarships