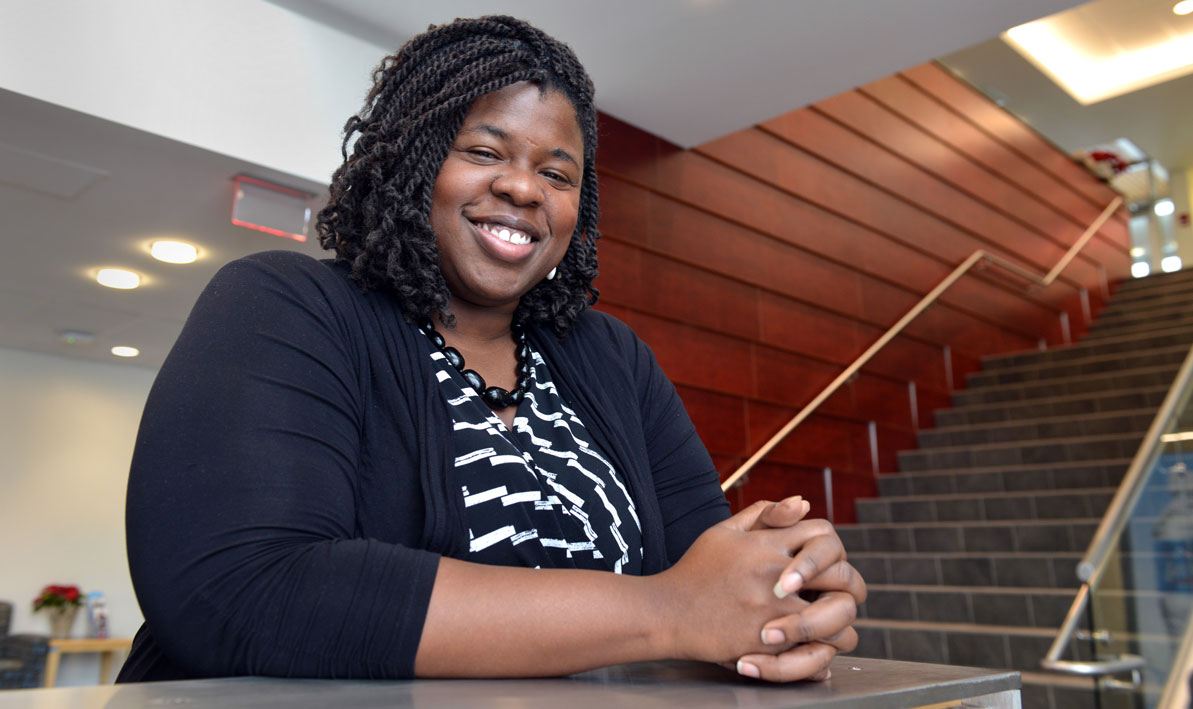 Ruby Maddox took to heart one important experience during her time as a student at Holyoke Community College: If you want something, make it happen.

That's why, as a student, she took an HCC-produced play around to local high schools and why she started an after-school theater program in her  hometown.

It's why she helped found, in 2001, the community-based food justice organization Gardening the Community in Springfield.

It's why, two years ago, she founded the nonprofit Leaders of the Free World, an international leadership development program for young black men, which she serves as founding director.

"HCC was a place where I learned, ‘Oh, I can make things happen. This is awesome,'" Maddox said during a recent visit to her alma mater.

Maddox, 36, who was born and raised in Springfield, hadn't planned on attending college after she graduated from high school. She had hated school and remembers being happy to be done with it. But when she learned her best friend was heading off to college, she had a change of heart. "I didn't want to be left behind," she said.

Two weeks before the fall semester was about to start, Maddox went to HCC for some basic information. She walked out an enrolled student. It would take Maddox five years to earn her degree, and it wasn't easy. She worked a full-time job for those five years.

"It's a struggle, and, sometimes, you're the only one who knows what you are doing and sometimes it seems like it would be so much easier to drop out," she said. "I don't ever remember being able to just be a student. That world didn't exist."

Still, the struggle was worth it and HCC a place she thrived. She became active in the theater, was honored with the Player's Medal given to role models in the Theater Department. She produced a play in HCC's black box theater, coordinated the box office, and organized a project that brought an HCC play to high schools in Springfield and Northampton. The following year, as a final project in her sociology class, she started an after-school theater program at a community center in Springfield.

In high school, Maddox recalls, she felt powerless but her experience at HCC was the complete opposite. "I felt like HCC was a place where I could make things happen," she said.

Maddox graduated from HCC in 2003 and went on to earn her bachelor's degree from the University of Massachusetts at Amherst in 2011 with a degree in urban communities and public policy. She earned a master's degree in nonprofit management and philanthropy from Bay Path University in 2013.

All the while, she worked full time as an event coordinator at Mount Holyoke College and at the college's Center for the Environment, where, among other things, she would bring groups of students to work at Gardening the Community.

Since 2015, Maddox has worked at Clark University in Worcester as director of LEEP Projects, which stands for Liberal Education and Effective Practice, where she helps students set up project-based summer internships. "I love doing for students what I feel like HCC did for me in terms of just saying, ‘What do you want to do, and let me help you do that,' " Maddox said.

A trip to Ghana - part of her UMass education - propelled Maddox to found Leaders of the Free World. That life-changing journey shifted her consciousness, she said, and made her want to offer the same experience to young black men.

She and co-founder Lavar Thomas took four young men to Ghana for two weeks in 2016, a journey that was wildly successful, she said. They are now planning another trip for 2018 and hope to bring 15 to 20 young men  along from different states.

Recruitment will focus on a cohort near and dear to Maddox: community college students.

"We feel like that's where the young men are who are already striving who could benefit the most from an experience like this — but who are least likely to get this opportunity," she said. "To this day, when community  college students are in front of me, they immediately become my favorite people. They don't take their education for granted."