"These scholarships have changed my life, both pre-pandemic and current. In all honesty, I would have had to drop out without them." – Todd Cummings 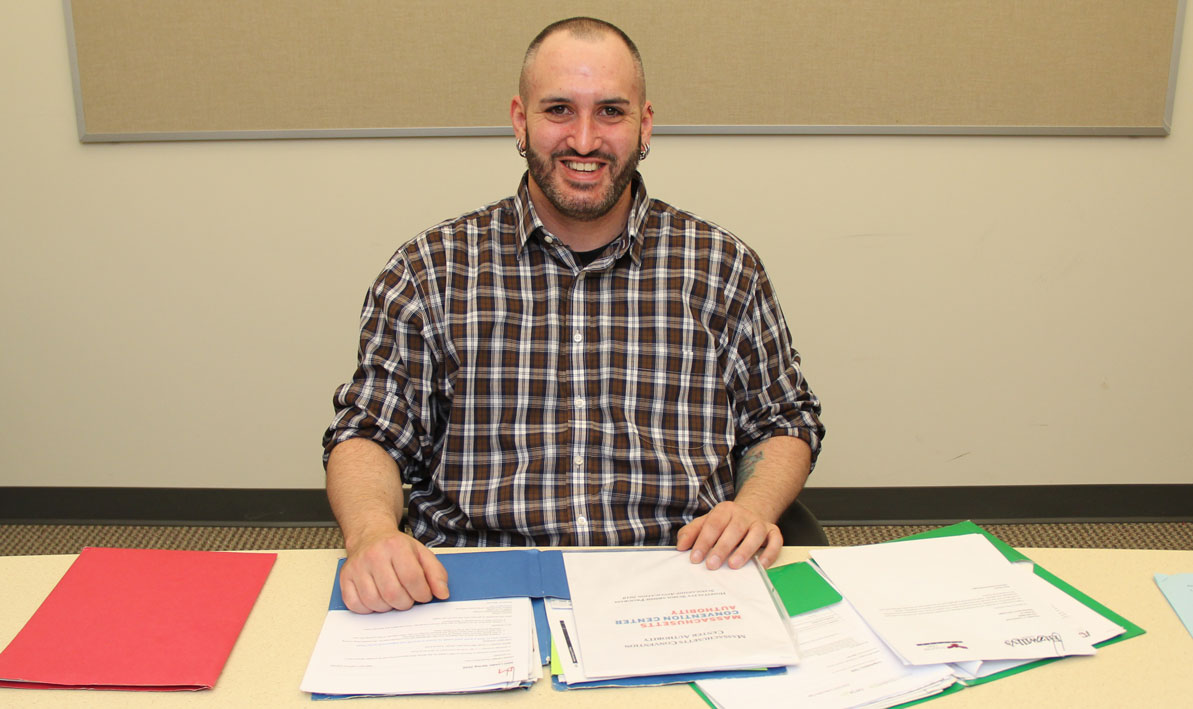 Everywhere he goes, Todd Cummings carries around a bulging, blue, two-pocket folder that after 2½ years is getting a little worn around the edges. Outside, affixed to the cover, is a simple white label that says, "Scholarship Info." Inside are the pages that hold the secrets to his success as a student at Holyoke Community College.

Cummings obtained the folder at a scholarship workshop during his first semester at HCC in 2018.The original materials included tips on finding scholarships, collecting supporting  documents, and preparing winning applications.

Since then he has added paper-clipped stacks of personal essays on various topics and in varying lengths, reference letters from all of his HCC teachers, and an index of his next scholarship targets. To date, and the list keeps growing, Cummings has been awarded 12 scholarships worth $31,000, more than enough to cover the costs of his HCC education – and then some.

"These scholarships have changed my life, both pre-pandemic and current," Cummings said. "In all honesty, I would have had to drop out without them."

Finances have long been a struggle for the 37-year-old Northampton resident, now more so than ever. A cook and lifelong restaurant worker, Cummings was laid off last year from his job at Fitzwilly's in Northampton due to COVID-19.

"I am currently in limbo with my unemployment claim and am still waiting for approval," he said. "I have been living off the extra scholarship money to survive in the meantime. I would be behind three months in rent and even further with my utilities. These scholarships have  become even more important during the pandemic due to the uncertainty of employment. However, knowing that I will be graduating from HCC debt free has freed my mind from worrying about paying off student loans."

On top of those, he has won scholarships from the Community Foundation of Western Massachusetts (two), the Massachusetts Restaurant Association (two), the National Restaurant Association, the Massachusetts Convention Center Authority (two), the NEWH New England Hospitality Industry Network, the American Culinary Federation, and the James Beard Foundation. Some of the scholarships are restricted in their use to direct educational expenses, such as tution, fees and textbooks. Others are more discretionary, Cummings said, and can be used for living expenses including food, rent, utilities and transportation.

He estimates he has applied or more than 150 scholarships, concentrating mostly on those based in Massachusetts and in his field of study.

"There's way more out there than I thought," said Cummings. "I play the numbers. The more I fill out and apply for, the better my chances of being awarded."

It also helps that he has developed a system and keeps all his information organized.

"At first it seems overwhelming," he said, "but after you do a couple and you have done the groundwork and collected your Student Aid Report, your FAFSA, your essays and references, you can just transfer those, tweak your essay a little bit and send it out."

When he was still attending classes on campus – before COVID-19 -–Cummings put together his application packets while riding the bus to and from HCC. (After more than 10 years without a car, Cummings was able to buy one last year with some of his scholarship money, a 2007 Lincoln MKZ. "It would have taken me another three to four years of saving," he said.)

"Todd has been the only student, to my knowledge, that has accumulated such a large collection of scholarships as a student at HCC," said Lori Wayson, coordinator of HCC's New Directions program and one of Cummings's advisers. "I attribute his success to hard work, research and networking. He is truly one of a kind."

The scholarships have given Cummings more than just financial stability, but also the freedom to concentrate on his studies. That has not always been easy.

He grew up in West Brookfield, Mass., where he started working at Howard's Drive-In at the age of 15, the first in a long succession of restaurant jobs. He graduated high school with a 1.64 GPA.

"Street smart," he said. "Not so much school smart. I think I passed all my English classes in high school with a D-minus."

His more recent educational experiences have been different. On the advice of Wayson, Cummings took two classes during his first semester at HCC that put him on the path to scholarship nirvana: English composition and computer applications.

He hadn't touched a computer since his senior year in high school – 17 years before.

"I didn't even know how to turn it on," he said. "If I didn't take those classes first I wouldn't have had the skills to put an essay together. It was the first time I realized I'm pretty decent at writing and the first time I ever got an A."

At HCC, Cummings's name has regularly appeared on the Dean's List. With a GPA of 3.5, he was  inducted into the HCC chapter of the Phi Theta Kappa Honor Society and the National Society of Leadership and Success. He joined the HCC Creative Writing Club and has had his work published in Pulp City, the college's literary magazine. He is a New Student Orientation leader, a member of the Student Senate and the Emerging Business Leaders Club, a peer tutor, and co-founder of a new HCC men's student support group called D.U.D.E. (Dedication, Unity, Drive for Excellence).

"I would not have been as successful in school if I was working full time in order to afford college," Cummings said. "These scholarships have allowed me the time to study and truly focus on myself to become better academically and as a person investing in my future. Yes, financially, scholarships help. To me, though, time is the greatest gift."

He expects to graduate from HCC this spring as a member of the Class of 2021. His ultimate goal is to open his own restaurant, but he is not naïve about the failure rate of such operations.

"You put me in the kitchen, I'm good," he said. "I can cook. I can run a kitchen team. I'm in school to learn the business part of running a restaurant."

Cummings completed his cooking classes of his degree – "the fun stuff" – early on. During his final semester, he is taking managerial accounting and micro- and macro-economics as well as public speaking and creative writing for theater.

After graduation, he will transfer into the hospitality management program at the Isenberg School of Management at the University of Massachusetts Amherst for his bachelor's degree and then his MBA.

Until then, he continues to spend his free time on his computer, researching, writing, drafting and re-writing scholarship applications and sending out a few every week.

PHOTO by CHRIS YURKO: HCC student Todd Cummings with his blue pocket folder and some of his scholarship application materials.