Hospitality Management major Todd Cummings '21 is one of HCC's Profiles of Excellence for Commencement 2021. 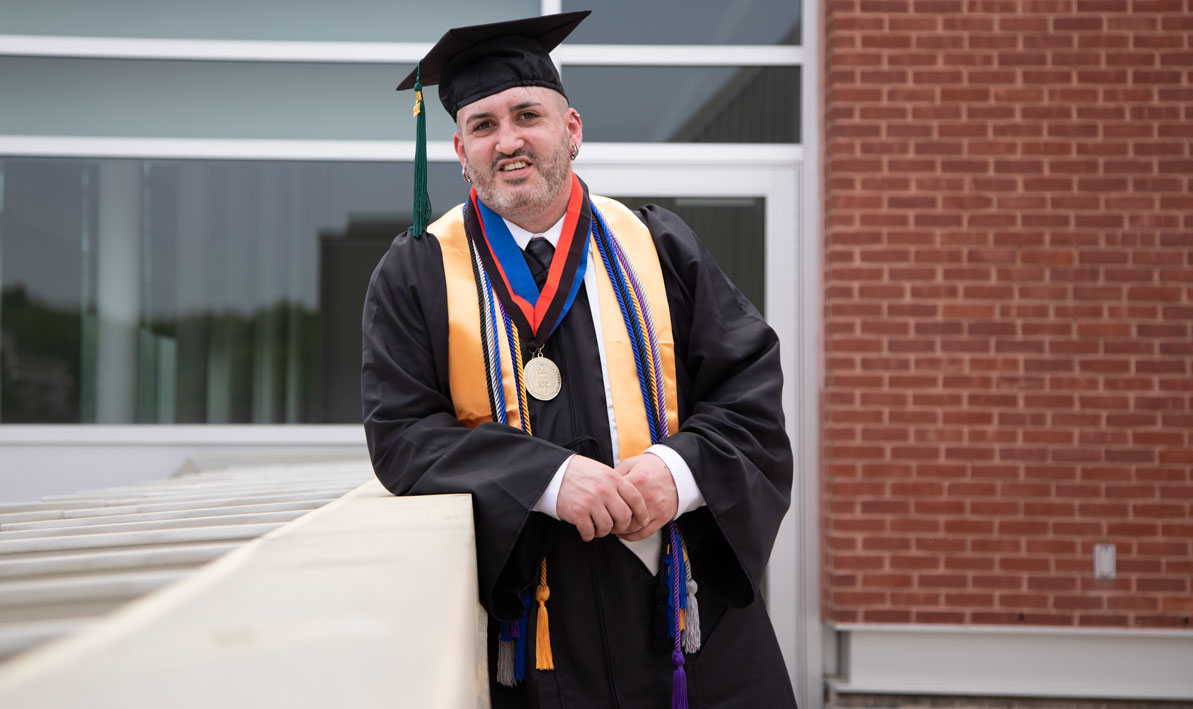 Todd Cummings got his first taste of restaurant life at the age 15. That's when he started working at Howard's Drive-In in West Brookfield, Mass., not far from his home in Warren.

For Cummings, high school was a slog. He graduated with a GPA of 1.64. By then, he'd decided that cooking, not college, provided a more promising path forward.

"I was street smart, not so much school smart," he says. "I think I passed all my English classes with a D-minus."

After many years and a long succession of restaurant jobs, Cummings added "restaurant owner" to his career plan.

Where he lacked confidence, though, was on the business side of running a restaurant – accounting, marketing, real estate, etc. For that, he turned to Holyoke Community College.

"Given the failure rate of restaurants," he says, "I want to be fully prepared."

Three years later, Cummings, now 37, is poised to graduate from HCC on Sat., June 5, with honors and his associate degree in Hospitality Management. In September, the Northampton resident will continue to study business and hospitality at the Isenberg School of Management at the University of Massachusetts Amherst.

"I feel good," Cummings said late last month. "I got a lot out of HCC."

Cummings had faced some steep hurdles when he started. For one thing, he didn't have a car and quickly realized the buses he relied on during the day didn't run after the classes he was taking at night and so he would need to budget money from his day job to pay for Uber rides back to his Northampton apartment.

Having been out of school for so long, he leaned heavily on his adviser, Lori Wayson, coordinator of HCC's New Directions for Adult Learners program. "Lori was my one-stop shop," he said. "She told me who to talk to and who to see, she helped me with financial aid and student accounts, and she helped me pick my classes."

Right away, Wayson pointed Cummings toward two classes he credits for putting him on the path to college success: computer applications and English composition.

"The last time I'd touched a computer was my senior year in high school," he said. "When I started at HCC, I didn't even know how to turn it on."

A co-worker gave him an old laptop. Cummings immersed himself in the challenge of learning a program most new college students take for granted – Microsoft Word. "It took time, and a lot of swearing at my computer," he said. "I never missed a class. I showed up early. I stayed late. I wanted to learn it. I needed to learn it."

In English 101, he discovered a talent for writing. He got an A, the first of his life.

"If I hadn't taken those two classes first I wouldn't have had the skills to put an essay together the right way," he said. "I wouldn't have known how to type it up."

That skillset proved invaluable as Cummings discovered another talent – finding ­and winning scholarships. He began his impressive run with the HCC Foundation, receiving the Delaney House Scholarship in 2019 and the Pamela K. Reed Scholarship in 2020, both earmarked for students in hospitality management or culinary arts.

Including his latest, a Flagship Award from UMass in the amount of $12,000, Cummings has collected scholarships worth an impressive $52,000. He estimates he has applied for close to 200, concentrating mostly on those based in Massachusetts and in his field of study.

"Todd has been the only student, to my knowledge, who has accumulated such a large collection of scholarships as a student at HCC," said Wayson. "I attribute his success to hard work, research and networking. He is truly one of a kind."

Finances had long been a struggle. Before he started winning scholarships, Cummings sought frequent assistance from HCC's Thrive Student Resource Center and Food Pantry for help with  groceries and credit counseling.

"Food is just one less thing you have to worry about when you're going to school full time, because this was not easy for me," Cummings said.

Money got even tighter after the pandemic struck and Cummings was laid off from his job at Fitzwilly's in Northampton and fell months behind in his rent and utility payments. "These scholarships have changed my life, both pre-pandemic and current," Cummings said. "In all honesty, I would have had to drop out without them. Knowing that I will be graduating from HCC debt free has freed my mind from worrying about paying off student loans."

More than financial stability, the scholarships gave Cummings the freedom to concentrate on his studies.

He's made the most of it. His name has appeared regularly on the Dean's List. He is a member of the Phi Theta Kappa Honor Society and the National Society of Leadership and Success. He joined the HCC Creative Writing Club and has had his work published in Pulp City, the college's literary magazine. He was a New Student Orientation leader, a member of the Student Senate and the Emerging Business Leaders Club, a peer tutor, and co-founder of the HCC men's student support group called D.U.D.E. (Dedication, Unity, Drive for Excellence). During his last semester he wrote a short piece for the HCC Theater Department's spring 2021 production, "In These Times," and also performed in the play as a first-time actor.

Last month, he received HCC's Class of 1953 Award for Outstanding Service from the Office of Student Affairs.

"The scholarships gave me the time to study and truly focus on myself to become better academically and as a person investing in my future," he said. "Yes, financially, scholarships help. To me, though, time is the greatest gift."