"They know they’re doin’ good if I call ‘em Bubba. Or Red Neck. If I call ‘em Red Neck, that’s a compliment." 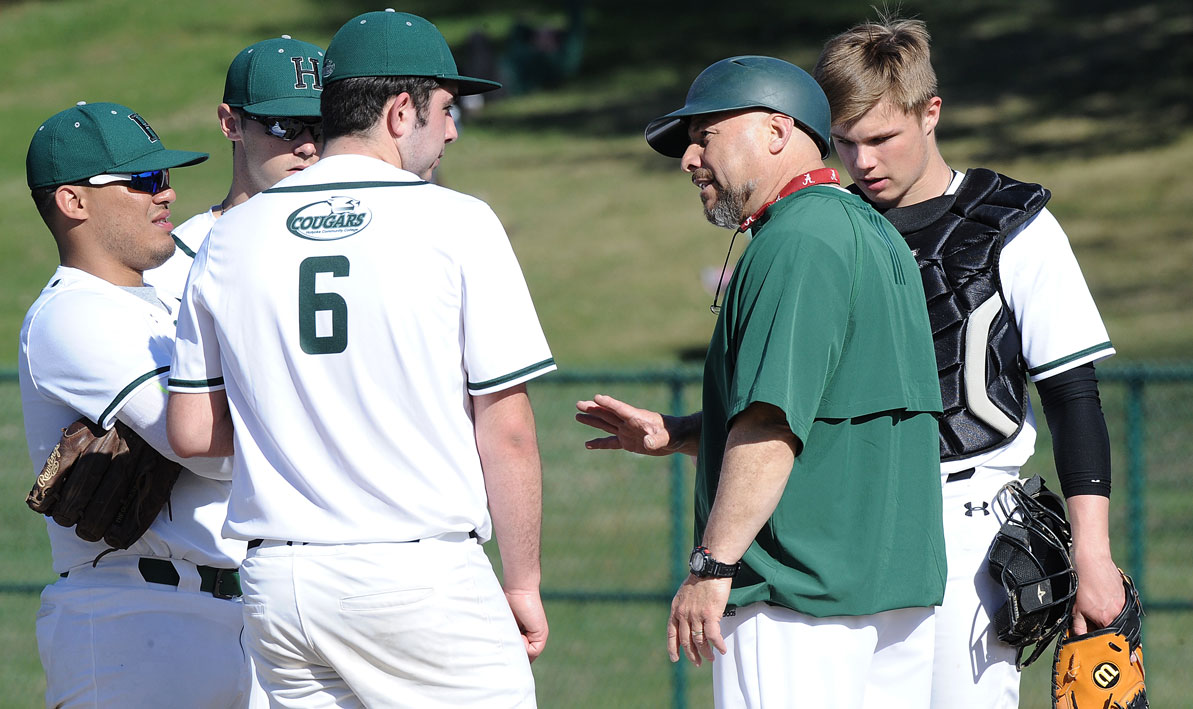 Editor's Note: This is a followup story to one from May 2015 titled "Who's on First? Coach D."

As a student at HCC back in the spring of 2015, Tony Dismukes took on one of the most significant assignments of his life.

He tried out for the Holyoke Community College baseball team.

No ordinary college athlete, Dismukes was a 54-year-old, retired Navy veteran who owned a hardwood flooring business and worked at Bradley International Airport as an officer for the Transportation Security Administration.

Plus, he already had a bachelor's degree in resource management he had earned in the Navy. What did he need more college for?

Well, despite a lifelong involvement with baseball that had started as a child growing up in Montgomery, Alabama, and playing in the Navy, which he had joined right after high school, and coaching the varsity team at Monson High, where he taught tech ed for five years, and serving in a succession of assistant coaching positions at Amherst College and Fitchburg State University, and one summer for the North Adams Steeplecats, Dismukes felt stymied in pursuit of his dream job as a head college baseball coach.

Time and time again, athletic directors told him he had a blank spot on his baseball resume ­– he had never played college ball. Filling that gap was the only reason he enrolled at HCC.

"I always wanted to play," Dismukes said at the time, "and I have this very small window of opportunity. I decided to give it my best shot."

That season, Dismukes played first base and pitched for the HCC Cougars. He practiced and played hard, picked up and lugged equipment, and listened and learned, from the coach, sure, but mostly from his teammates, all of them decades younger by a long stretch.

"I loved it," he said recently. "It was great. I just remember having the camaraderie with the kids. That's what I wanted. It was fantastic."

His best shot turned out to be enough. After serving the HCC team in 2018 as, yet again, an assistant, HCC athletic director Tom Stewart hired Dismukes as head coach for the 2019 season.

"I've been waiting for an opportunity like this to come along," said Dismukes, who prefers to be called Coach D. "It took me a long time, later in life, to find out what I wanted to do, but this is definitely what I love to do."   Now 58, Dismukes has given up the flooring business – too hard on his aging knees – and traded his job at the TSA for one as a consumer technician at the FDA, the Federal and Drug Administration, which allows him to work from his Belchertown home during the baseball season.

"This isn't a full-time job," he said of his new coaching position. "It's a stipend, but it gets me in here. It's my program, and I'm loving it. The kids are great. This is so fun."

Winning would be fun too, and the Cougars have not experienced much of that in recent years, compiling losing records of 7 and 15 in 2018 and 6 and 17 in 2017. This spring, after opening the season with five straight losses, HCC defeated division rival Quinsigamond Communiy College 7-3 on the road.

Seemingly always optimistic and joyful, Dismukes hopes to turn the program around through enhanced recruitment efforts.

"I got a lot of work to do this summer," he says in a voice with a sweet southern melody. "We've only got 15 kids this year. I'd love to have 25 kids. Of course, as you know, with baseball, you gotta have pitching. We got, really, two pitchers. Butchya know, they're improving. Their attitude is great. They're willing to learn. They're coachable. I'm having a blast and hopefully they are too. Hopefully they feed off ma' passion. I'm hoping to build a great program here. I really am."

Stewart has high hopes as well.

"Tony's been around baseball a while, and his enthusiasm has breathed new life into the program," he said. "In order to be successful, particularly at this level, you've got to recruit kids and keep them motivated so they stay. He's got a whole new approach and you can see it. There's a lot of teaching going on. He's doing classroom work as well as in the gym and on the field. He's gonna do well."

Dismukes' wife Donna, herself a retired Navy commander, is a frequent presence in the stands at Cougar Field. She brings snacks for the players and coffee for her husband. "She's our number one fan," he said. "I wouldn't be doing this if it weren't for her support and encouragement. She's wonderful."

Down 6-2 in the fourth inning of a recent home game, Dismukes offered his own southern brand of encouragement from the third base line that made it difficult to identify the players with any certainty. They all seem seem to have the same nickname – Bubba.

Dismukes said the players were was excited by that first win against Quinsigamond, but he tries to keep them motivated even when they lose.

"It's funny, cuz I just told 'em the other day. I bring 'em in. I said, I want y'all to know something. I get excited when I see you guys improve. When y'all make a good play, when y'all hit the ball. That's great. I said, I might not show the emotion cuz I'm thinkin' of other things, but inside I'm paddlin' like a duck. Calm on top, but underneath, I'm paddlin' like a duck. I think that kinda got 'em riled up there, knowing that someone cares for 'em. We're not just out there going through the motions. We gotta have a purpose when we come here. That's why I'm passionate about it."

Dismukes still plays baseball himself in the western Massachusetts "30 and Over" league during the summer and recalls with characteristic joy the season he played on the HCC team.

During one game as the starting pitcher, he had a no-hitter going into the fourth inning - until he gave up a home run. He doesn't credit the early inning success, though, to his having any great "stuff" on the mound.

"I was so slow they were just trying to kill the ball," he said. "It was so fun. I loved it. I loved it. It was great. And it paid off. I'm a head coach. I'm livin' my dream now. If I can just move into the teaching profession and coach I could do this until I'm 90. That would be another story."

PHOTOS by DAVE ROBACK: (Thumbnail) Coach D grips a baseball during a recent game. (Above) Coach D makes a trip to the mound.