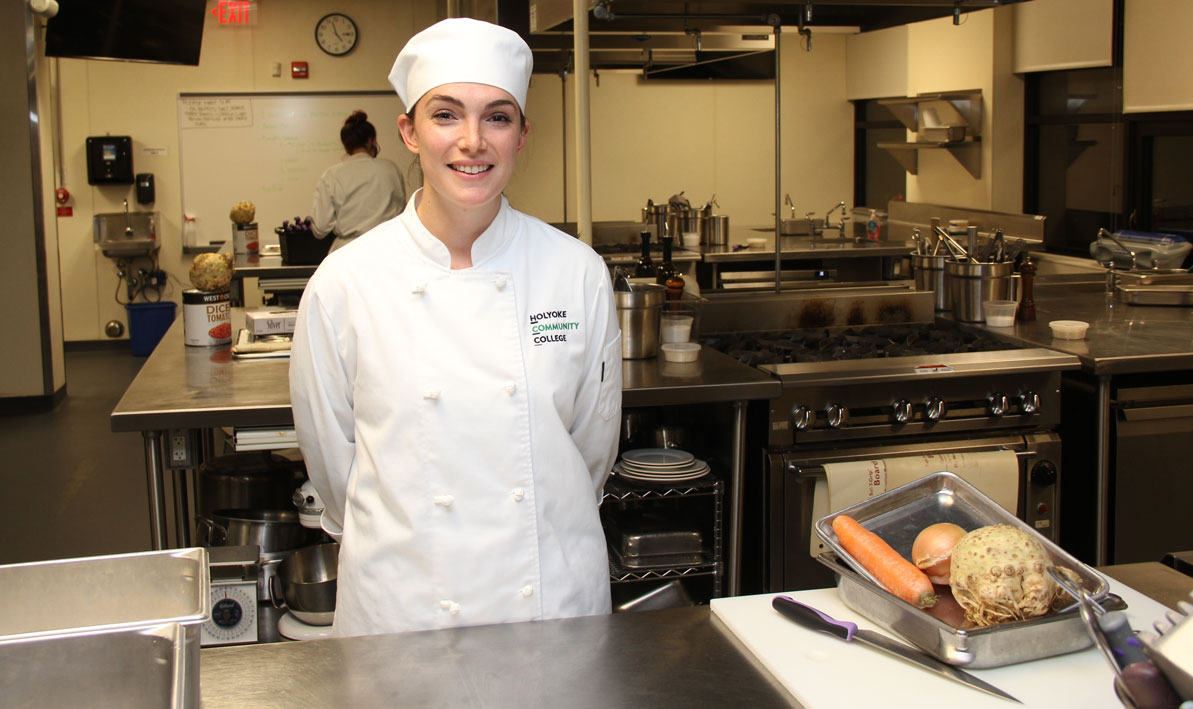 Dressed alike in their black-and-white checkered pants and crisp white chef's coats bearing the Holyoke Community College insignia, they gather before class around a table in the banquet room of the HCC MGM Culinary Arts Institute. Just before 5 p.m., Chef Warren Leigh enters and greets his students cheerfully.

He reminds them what's expected to pass this course, most importantly: mastering precision knife skills, maintaining a sparkling workstation, cooking without burning. ("That's a fail," says Leigh, though his eyes reveal the smile underneath his mask.)

"All right, let's get in the kitchen," he says, turning heel to head into the stainless steel-gleaming instruction kitchen, students in puffy white chef's hats following behind like little ducklings.

"What takes the longest to cook today?" he asks.

"But you can't start it until your vegetables are cut, right?"

And so it goes with Chef Leigh – chief instructor, drill sergeant, coach, cheerleader. Tonight is the class's second with this menu. Whenever possible, he gives students multiple opportunities to improve if not perfect a dish.

Among the students taking to their stations is 27-year-old Julianna Knapczyk of Easthampton. She begins carefully cutting and measuring vegetables, hoping to improve her Vichy dish, a mix of onions, carrots and celeriac cooked in butter, sugar and water (named Vichy after a town in France.) Chef Leigh's feedback the first time around was that her Vichy veggies weren't sweet enough.

This time she plans to cook the onions longer and more slowly to draw out the natural sugars.

Knapczyk appreciates Leigh's teaching style. "He's not one to mince words," she says, not noticing the pun. "If something is bad, he'll tell you to fix it, but he's encouraging at the same time."

About eight months ago, Knapczyk left a career in finance to pursue her passion for food and cooking. That career shift was partly motivated by changes ushered in by the pandemic.

After graduating from the University of Massachusetts in 2016 with a degree in economics, she moved to Boston, working for three years as a market trader and researcher for State Street Bank, followed by two more at a startup solar investment firm.

In June of 2020, her lease up and working remotely, she moved back home with her parents – and reassessed her future. A career in finance was secure but she felt a pull to turn her longtime hobby into a career.

Food had always been a creative outlet for Knapczyk. When she cooked for her parents and sister, self-described foodies, they noticed the great care she took in food preparation and presentation. Professionally, she had front of house experience, working in high school and college as a server at the Log Cabin and Delaney House and at a tapas restaurant in Northampton. But she had no professional kitchen experience. How could she could break into the field without that?

She began looking into the Italian Culinary Institute in Calabria, Italy, which offers an immersive three-month program. But she had concerns: What if she discovered cooking professionally really wasn't for her? How would she get on in an advanced program like that as a completely self-taught cook?

As it happened, while browsing the Internet in September, she was floored to learn about HCC's Culinary Arts Institute on Race Street in downtown Holyoke, just minutes from her Easthampton home. Not only that, there was a 10-week Line Cook Training course starting a few days later, on Oct. 5. Not only that, the program was free.

"That sounds too good to be true," she thought. She signed up, figuring she would build some skills and see if she really liked cooking professionally.

HCC has offered free Line Cook Training in a repeating cycle for the past four years thanks to grants from the Massachusetts Gaming Commission Community Mitigation Fund, which draws from taxes paid by the three casinos in Massachusetts, including MGM Springfield, which supplied some of the funding for construction of the Culinary Arts Institute.

This round of classes wraps up December 17, and another starts January 26. The program runs through HCC's office of Business and Workforce Development. Students can earn ServSafe certification and develop skills needed to work in a professional kitchen. The course also offers resume preparation, mock interviews, and career counseling, and students receive free ServSafe books and full chef uniforms.

"We do a really good job of helping them get prepared to get a job," says Leigh.

Knapzyk threw herself into the program, which runs three nights a week from 5-9 p.m. The first three weeks met online, where students received instruction in culinary history, and culinary math, and learned about the tools, equipment, and ingredients they'd be using in the Culinary Arts Institute's commercial-grade kitchen.

"We were really prepared once we walked in the doors," says Knapczyk.

And now, she's prepared to move on.

Just a few weeks in, Knapczyk signed up for the culinary institute in Italy. She starts January 8.

She says her HCC training has been invaluable. She's learned how to stand properly while using a cutting board to avoid back fatigue (and pain) during long hours in the kitchen and how to make basic cuts and precision cuts. She's learned different cooking methods – moist techniques like blanching and poaching and dry techniques like pan frying and deep frying – as well as the importance of plating and presentation.

From the start, Leigh said, Knapczyk was a standout, getting to class early, taking instruction well, volunteering for extra work, eager to learn and practice.

"She improves every day," he said. "For her, it is just trusting her new skillset."

Even though Knapczyk will be the first of his students to head off to Europe for further culinary training, Leigh is not surprised.

Nearing the end of the second night of salmon, risotto and Vichy vegetables, Chef Leigh circulated around the kitchen, sampling his students' creations – and sharing in their success. Knapczyk was gratified. The salmon and risotto tasted good.