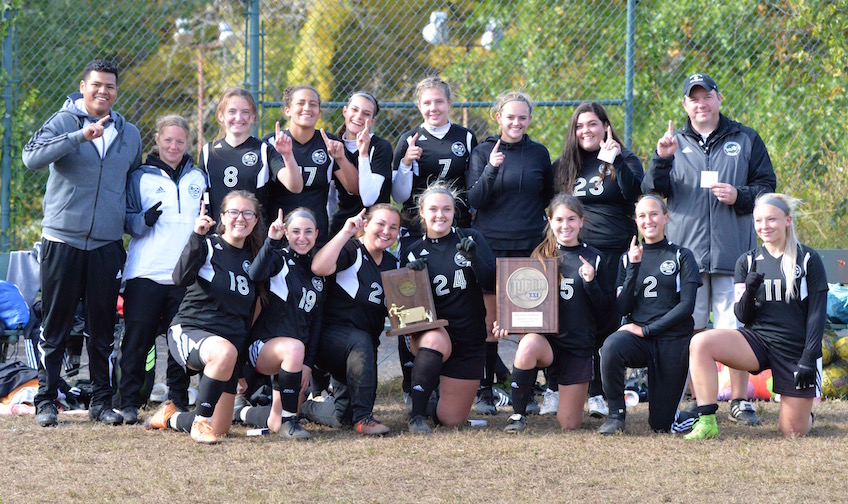 In doing so, the Cougars claimed their seventh consecutive regional championship and 11th in the past 13 years.

The Cougars split games with Massasoit during the regular season and the two sides had finished tied atop the New England standings with matching regional records of 9-1-0. Holyoke's regular season loss to the Warriors was the program's first regional loss since 2011.

"The team  worked extremely hard to prepare for their tournament meeting with Massasoit, and I think we had just the right game plan for the season's most important game," said coach Rob Galazka.

A strong wind played a key role in Sunday's matchup; all three of the game's goals were scored by the team with the wind at their backs. Holyoke trailed 1-0 at halftime but a relentless attack in the second half led to the tying goal. The momentum carried into overtime where the Cougars won the game.

Center midfielder Sam Tersavich (Westfield / Hampshire Regional), a key figure all season,  scored the game-winning overtime goal to claim the championship for the Cougars with just 33 seconds remaining in the first overtime period.

Tersavich launched a shot from 35 yards out that sailed over the opposing goalkeeper's outstretched arms and dropped in just under the crossbar, sending the Cougars into elation. During the second half, defender Gabby Petlock (Southampton/ Smith Vocational HS) was moved up into the offense to play her more natural position of forward. This is where Petlock sprinted past the Massasoit defense to receive a perfect through ball pass from Tersavich and bury her breakaway chance for the game-tying goal.

In the three games against Massasoit this season, Holyoke has scored five goals, all of which were scored by Tersavich and Petlock. Center back Jessica Patruno (Granby / Granby HS) led the defense on Sunday alongside Petlock and Kari Little (Amherst / Amherst HS), keeping a strong Massasoit offense from earning too many scoring chances. Center midfielder Shannon McCarthy (Chicopee / Chicopee Comprehensive HS) was outstanding for the Cougars, dominating in the middle of the field while leading the game plan to deny long passes to Massasoit's speedy forwards.

In its semifinal game Saturday, the Cougars defeated Bunker Hill Community College 5-0, led by a goal and two assists from Madison Zollo (Monson / Monson HS). Steph Robert (Monson / Monson HS) and Emily Toro-Mattoon (East Longmeadow / East Longmeadow HS) each scored in the win and each played one half of the game in goal to share the shutout. Olivia Brooks (Agawam / Agawam HS) and Tersavich had the other goals on Saturday and McCarthy had a pair of assists.

The Cougars regional record is 11-1-0 and 12-6-1 overall. Their record against NJCAA division III teams is 12-4-1. The New England championship is the women's soccer program's seventh consecutive title and 11th in the past 13 years.

Next, Holyoke will host a District Championship on Sat., Oct. 27 at noon against Nassau Community College.

Nassau has been a thorn in the Cougars' side in recent years, having ended the team's season  three of the past four years. The Cougars played Nassau earlier this season in Garden City, N.Y., falling 2-1 in overtime.

Holyoke looks to avenge the series of heartbreaking losses Friday, Oct. 26, at home, where a win would punch their ticket to the NJCAA National Tournament (Elite Eight) for the first time since 2013.