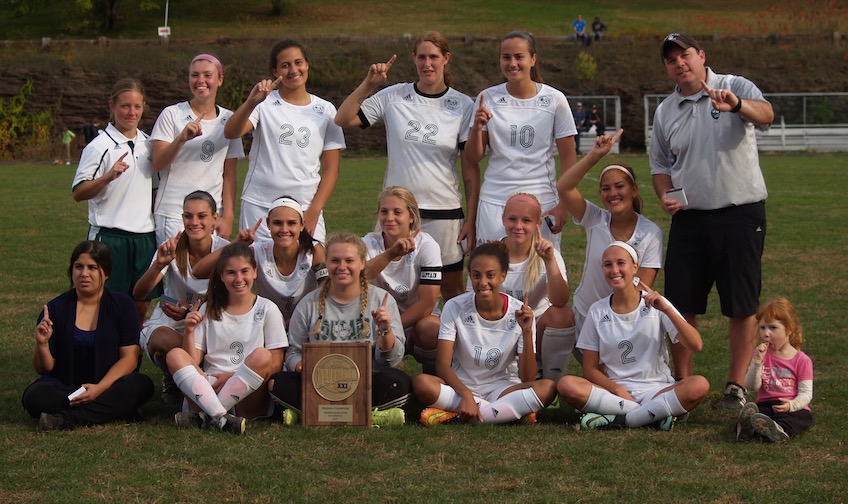 The New England champion Cougars are a perfect 9-0-0 in regional play this year and have registered eight shutouts while outscoring their opponents 54-1.

Co-captain Allison Zollo of Monson (Monson High School) led the way as the most dominant player on the field in Sunday's win, anchoring Holyoke's defense and stifling STCC attackers for the duration of the contest. In addition to her stellar defending, Zollo scored the Cougars' second goal, heading a perfectly placed corner kick from Emma Gomes of Ludlow (Ludlow High School) past the opposing goalkeeper.

Tamara Nicholson of Chicopee (Chicopee High School), who played exceptionally in all three matchups against STCC this season, opened the scoring for the Cougars when she sprinted past the Rams' defense before depositing the ball in the back of the net. Holyoke's sophomores each played an enormous role in Sunday's win as co-captain McKenzie Wilson of South Hadley (Smith Academy) and defender Catherine Hotham of Southampton (Hampshire Regional) joined Zollo and Gomes among the team's outstanding performers, with Hotham tallying an assist.

Goalkeeper Maddisin Atkinson of Easthampton (Smith Vocational High School) made two saves, earning her 11th and the team's 12th shutout of the season.

The Cougars, the top-seeded team in this year's NJCAA Division III Region XXI tournament, had shut out the STCC Rams in their two previous meetings this season by scores of 4-0 and 5-0

"STCC played us pretty strong, but we had a little too much for them to handle," said head coach Rob Galazka ‘94. "This year's group deserves their New England Championship. Great group of kids and great soccer players."

STCC, the number two seeded team, defeated Massassoit Community College Friday in the semi-final game to earn the right to play HCC for the championship.

The Cougars have an overall record of 14-4-0 and the New England championship is the sixth consecutive regional title for the HCC women's soccer program as well as its 10th in the past 12 years.

HCC has not lost a game in regional play since 2011.