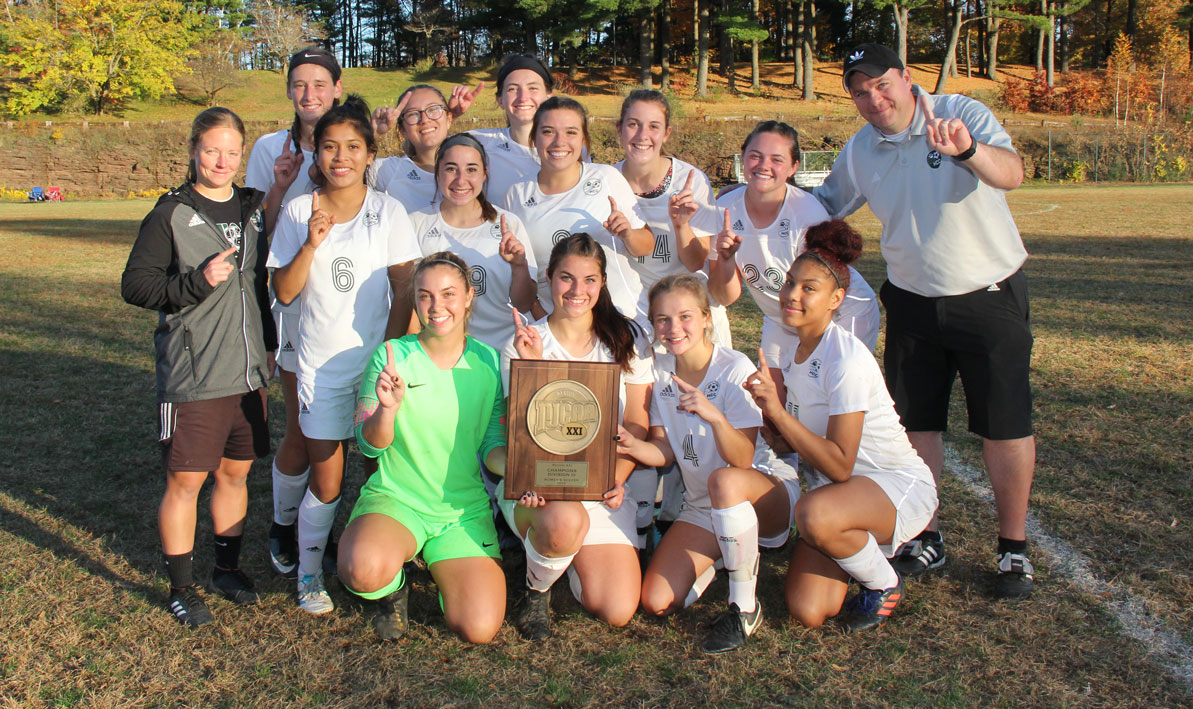 The Cougars will travel to Uniondale, N.Y., on Sat., Nov. 2, to play against Nassau Community College in a district championship game kicking off at 5:15 p.m. The winner will advance to the Elite Eight of the National Junior College Athletic Association Division III National Championship tournament.

In Monday's game at home on O'Connell Field, delayed a day because of Sunday's rainstorms, Holyoke controlled possession of the ball for most of the game and outshot their opposition while perfectly implementing a defensive strategy to keep Bristol's potent offense from scoring. The penalty kicks went six rounds with Holyoke emerging triumphant by a 5-4 shootout score.

The New England Championship is the HCC women's soccer program's eighth in a row and 12th in the past 14 years.

Cougars' goalkeeper Hannah Garon of Monson (Monson High School) was superb in the shootout, saving two of the six penalty kicks she faced while also scoring what turned out to be Holyoke's go-ahead goal. Garon's save against Bristol's sixth shooter was a spectacular diving stop. She made two saves in the game before the shootout, earning her and the team's 10th shutout of the season.

Alyssa Tortora, Bristol's top scorer, leads the nation in NJCAA Division III with 47 goals and had scored in all but one of BCC's previous games. Defensive midfielder Kayla La Fortune of Holyoke (Holyoke High School) was exceptional for the Cougars, said head coach Rob Galazka '98, tasked with preventing Tortora from receiving the ball and taking shots on goal.

"On Monday, the team held her without a shot on goal, thanks mostly to the extraordinary defending of La Fortune," Galazka said.

Holyoke played Nassau earlier this year in Holyoke with Nassau winning 1-0. The teams have met in the district championship round in four of the last five years with the Lady Cougars winning last season and advancing to nationals.

Photos: (Main) The 2019 HCC women's soccer team and coaches with their New England championship plaque. (Thumbnail) The team celebrates after their 5-4 victory in an penalty kick shootout.