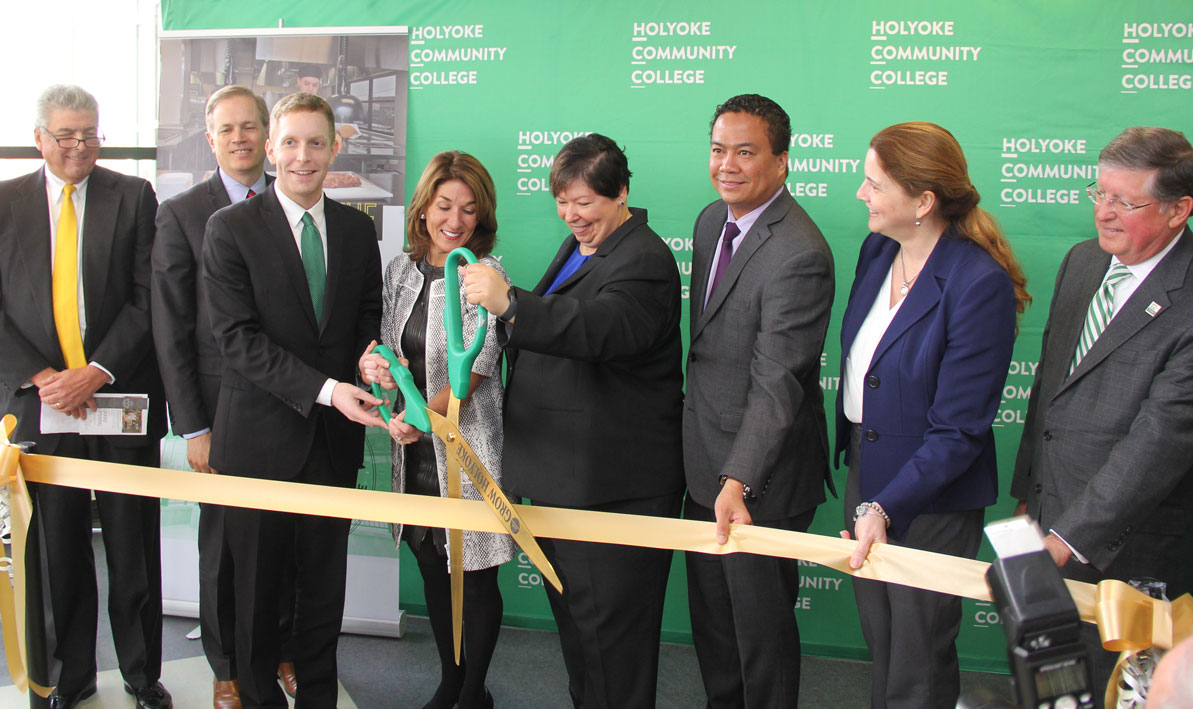 "It looked very different," she said yesterday during a grand opening celebration for the new Holyoke Community College facility. "I had to put my imagination cap on because it was gutted. There was nothing here, and to see it today - this is a really proud moment for me and for everyone."

Polito, the mayor and hundreds of others from the city, the region and the state got a close up look at the finished product as HCC Culinary Arts students, alumni and guest chefs from MGM Springfield prepared a variety of small plates for guests in the facility's five kitchens.

"This is an incredible day for all of us here in Holyoke, in this region, and in this Commonwealth," Polito said. "I am very grateful on behalf of Gov. Baker and our entire team how proud we are of all of you for working hard to make this day happen."

The 20,000 square-foot, $6.43 million facility occupies the first two floors of The Cubit Building at 164 Race St. Though the institute opened for classes in January for the start of the spring semester, yesterday's event marked its official opening. After remarks, Polito, HCC president Christina Royal, and Mayor Morse together held a large scissor as they cut a ceremonial gold ribbon.

Before that, Polito noted the small part the governor's office played in the facility, with a $229,000 allocation through the state Executive Office's Workforce Skills Capital Grant Program "to put in state-of-the-art equipment that you have all been able to see today," she said. "This is a learning lab. Allowing people to learn the subject matter and then apply it to hands-on learning, there is no substitute for that. And this is a learning lab that we are looking to replicate in other parts of the state, not just in culinary arts, but in advanced marketing, engineering and life sciences."

Polito noted that, according to the regional employment board, there are 1,700 vacant jobs in the culinary and food service industry in western Massachusetts.

The lieutenant governor had a personal guide during her tour of the facility – HCC Culinary Arts student Heart Moser.

"Heart represents the individual, the students, young and older, who will come to this building and be a part of this program and learn the skills and professional acumen," she said. "She represents you well, and I was really happy to have a few moments with her because she talked about how this is really a dream come true for her."

The 20-year-old Moser, who is from Granby, will receive her certificate in Culinary Arts in June.

"That is very valuable to her and to us in the Commonwealth," Polito said. "She's going a step further. She's going to continue on in college and perfect her baking skills."

Polito was followed at the lectern by several other speakers, including 20-year-old Michael Serrano of Springfield. Serrano works at the 99 Restaurant while taking classes at the new building. He'll earn his Culinary Arts certificate in June and then continue on at HCC for his associate degree in Food Service Management.

"This facility has a big role in my education," said Serrano, who also has a work-study job at the institute cleaning and organizing the kitchens. "The space is amazing. There's way more than in the last facility."

"The best part of this place," he said, "is that it's mine. I come in here, and I don't own in legally, but it's mine. I can walk through these door and not worry about anything."